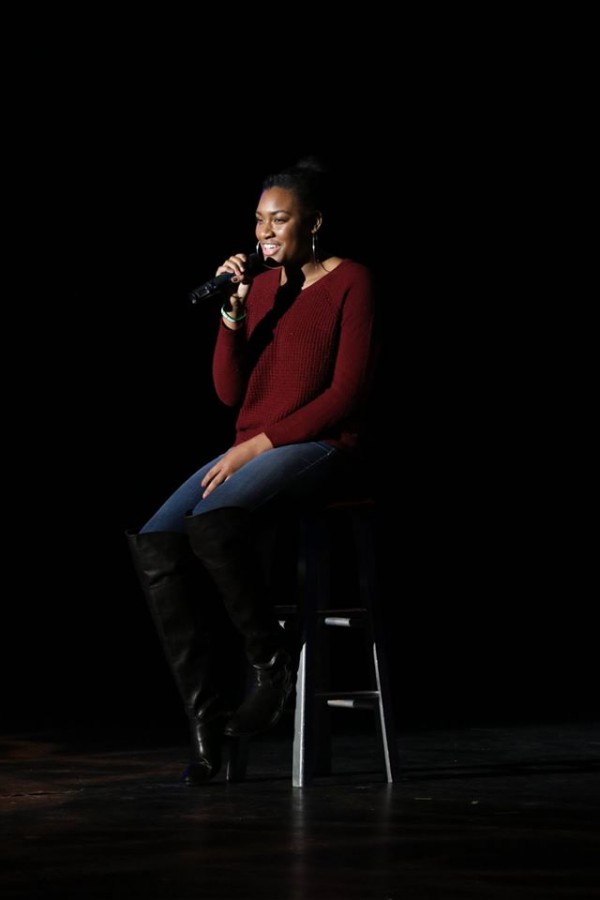 Senior Kennedy Gray had never sung solo in front of her peers before the CHS’ Got Talent Competition Dec. 2. Gray was inspired to sing by her grandmother who encouraged her to get over her stage fright.

All of the participants in the highly competitive Churchill’s Got Talent (CHSGT) show were impressive, with acts ranging from band performances to dancing to beatboxing. However, senior Kennedy Gray had just enough talent to sing her way into the winner’s circle.

Gray sang a nearly perfect version of “If I Ain’t Got You” by Alicia Keys at CHSGT while sitting on a stool in the middle of the stage with background music playing. After hitting the first high note in the song, the crowd rose to their feet and applauded Gray’s spectacular voice.

“I was really happy that I got the performance over with, but I was also happy with myself that I tried out in the first place,” Gray said.

Gray began attending CHS during her sophomore year after moving from Natchez, MS. She was not well known for her voice before the competition, but after her singing performance, she has become nearly famous at CHS.

“I think her voice is amazing, and I think it’s great when you hear kids do things you don’t expect them to do,” CHSGT judge and Philosophy teacher Evan Rosenthal said. “Finding out kids have talent that you didn’t know about is pretty amazing.”

Gray has enjoyed singing since she was about 3 years old and plans to keep singing in the future. She was inspired by her grandmother to start singing, and although she doesn’t plan on singing professionally, she will continue to pursue singing as a hobby.

“My grandmother sings in a choir, and she encouraged me to sing and get over my stage fright in a way, so I guess she’s been the driving force behind my singing career,” Gray said.

Gray attended the two CHSGT rehearsals, but she already knew how to sing the song, so there wasn’t much preparation needed for the performance.

Gray may have chosen a song by Alicia Keys, but she and her friends agree that her favorite artist is Beyoncé.

According to Gray, she appreciates Beyoncé’s ability to have a powerful voice and put in tons of effort to be as talented a singer as she is today.

Gray’s friends, seniors Ijay Onu’chiedo and Kynedi Gray, both admire Kennedy’s ability to sing and have supported their friend and her passion for singing. Although they didn’t attend CHSGT, they saw videos of the performance, attended the audition and are accustomed to hearing their friend perform off-stage.

“Beyoncé is going to need a backup singer, so now we’ve got one,” Kynedi Gray and Onu’chiedo jokingly said. “When Beyoncé is off the scene, we’ve got a new Beyoncé.”

Not only does Gray sing, but she is also a competitive basketball player and cheerleader. Girls varsity basketball head coach Katelyn Blanken, who currently coaches Gray, was surprised to see a different side of her at CHSGT that she had not seen before.

“At first when I heard she was choosing Alicia Keys, I thought it was a really hard song,” Blanken said. “But when I heard her, it moved me to tears.”

Gray has had stage-fright related issues before a big performance, but says her grandmother has been a big influence in her conquering her fear. She sometimes fears that before she sings, she will forget the words or mess up a part. As both an athlete and a performer, she feels each has a different kind of nervousness.

“When you are singing, you are up there by yourself. It’s an individual thing and people are going to judge you,” Gray said. “But when you are on a team, you are surrounded by people with a lot of love.”

According to CHSGT judge and English teacher Valerie Mainwaring, Gray’s performance was, “out of the park.”

“We’re proud of her because she’s so shy,” Onu’chiedo said. “She actually went up there and sang in front of a whole bunch of people and did really well.”

If she weren’t a senior, Kennedy would participate in CHSGT again. She was happy that she could express her voice to the audience and receive a great response from the observers.

“Nobody knew that I sing because I’m pretty shy about it, but that’s why it was a big deal for me,” Gray said.