CHS Theater Shows How to Succeed in Musicals 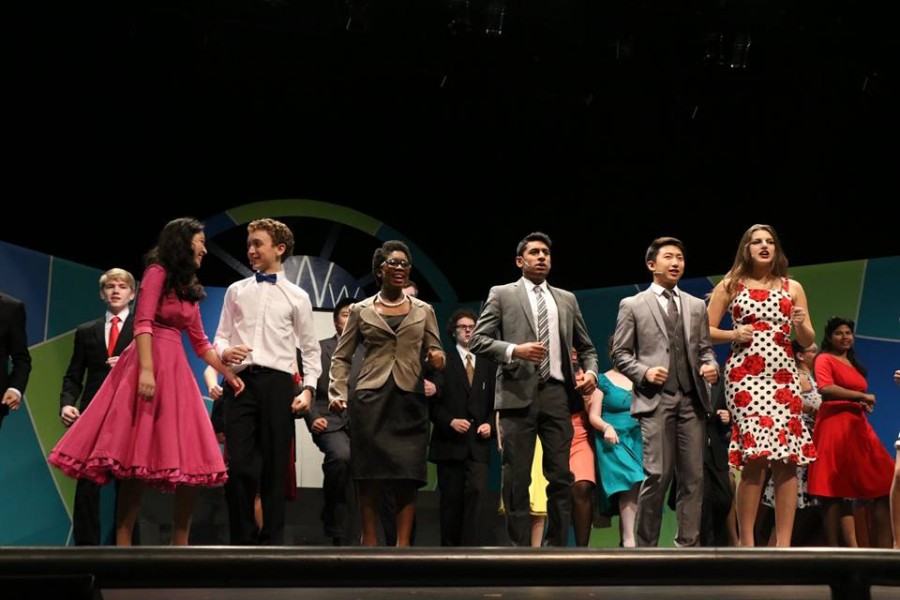 The How to Succeed in Business Without Really Trying cast performs on stage during a dress rehearsal. The show opened Nov. 13.

CHS’ production of How to Succeed in Business Without Really Trying opened Friday, Nov. 13.

With a large crowd of parents, students and staff attending, CHS’ performance of this classic ‘60s musical was a hit.

The musical itself may seem uninteresting at first glance, due to the setting in an office building. However, due to the satirical nature of the plot, it is very comedic and attention-captivating. The audience’s attention is held through the typical American rags-to-riches story and the romance of Rosemary Pilkington (senior Natalie Hwang) and J. Pierrepont Finch (sophomore Ethan Miller).

A major theme in How to Succeed was the idea that men and women in the business world are human like everyone else, not just workaholics. The camaraderie and connection between the actors and actresses made this theme a reality. They seemed to all be very close in spirit, allowing the human side of their characters to truly shine through.

Another major theme of the musical was that of gender roles and their importance in society. It takes place in the early ‘60s, a time when gender stereotypes were more prevalent in society than they are today. Props are due to the actors and actresses for doing a superb job in exemplifying this critical aspect of the musical.

With very colorful, conservative dresses and curly hair on the girls and classy suits and slicked back hair on the guys, the costumes exemplified feminine and masculine ideals.

“This show is a lot about gender and how different genders affect jobs, so I wanted to show a strong contrast between the men and women,” said costume manager Libby Spriggs.

A perfect example of a scene when gender roles were evident was in Nathalie Hwang’s first solo, “Happy to Keep His Dinner Warm.” Hwang, as Rosemary, reveals her dream of a life with Finch in the suburbs as a housewife. The gleam and expression in Hwang’s eyes as she sings about this truly brings her dream to life, and reveals her expected role as a woman in the ‘60s.

Although the musical itself lasts three hours, the time passes quickly due to the ability of the actors and actresses to keep the audience entertained. The leads do a magnificent job of being appropriately expressive in their dialogue, facial expressions, physical actions, dance moves and songs. This expressiveness allows the audience to be immersed in the storyline of the musical and identify with the characters.

“I thought the length was perfect, and overall I thought the musical was really funny,” junior Joanna Kramer said.

As J. Pierrepont Finch, a window cleaner in New York City who attempts to succeed in the business world, Miller delivers a spectacular portrayal with exaggerated expressions and a clear voice. In his solo, “Rosemary,” Miller seems to become his character as Mr. Finch realizes he is in love with his coworker, Rosemary Pilkington.

Hwang also does a fabulous job in playing the female lead role of Rosemary Pilkington, Finch’s love interest. Despite being an excellent actress in the expressiveness of her dialogue and actions, her voice blew the audience away. Particularly in her solo, “I Believe in You,” the audience was sure to get chills from the power in her voice.

“Ever since I was young, I have had a voice teacher,” Hwang said. “I particularly like to sing Broadway songs that have stories and characters behind them.”

Overall, the band was superb, the choreography perfectly detailed, the use of props effective and the camaraderie between the characters stellar. However, while the choreography had potential, the execution of the dance moves in the full cast numbers could have been more synchronized, as it seemed to be slightly unrehearsed.

The set of How to Succeed was very colorful, which was a visually appealing twist on the traditional office scene. Some scenes made great use out of the drawn curtain, such as the scene where the World Wide Wicket Company films a TV ad.

“We had to construct everything you can see during the production as well as some other things, such as platforms and stairs, that you cannot see,” student technical director Matthew Stewart said. “Also, we have to change, focus and prepare all of the lighting.”

According to Stewart, the tech crew spent many days as well as very late nights at school.
The technicalities of the production were overall virtually flawless, with perfect lighting and sound coordination.

The musical is very visually appealing and the songs are fun to hear.

“I’m friends with practically everyone of the cast.” Hwang said. “Everyone is really kind, supportive, and fun to work with.”