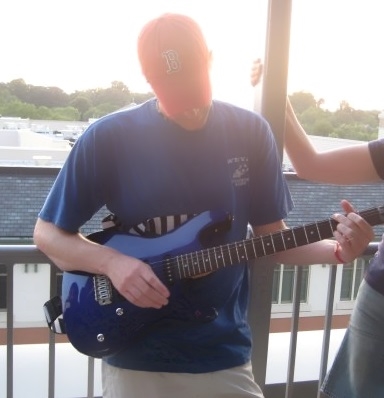 Brown jams on out on his guitar for fun.

Kevin Brown
English and AP Lang teacher Kevin Brown likes rock songs with masculine singers, that give meaning to their words. Here are his favorite songs:

1) “Black” by Pearl Jam
2)“Where Did You Sleep Last Night” by Nirvana
3)These next two were a tie for Brown, both performed by the same band
a.“The Woods” by White Buffalo
b.“Love Song #1” by White Buffalo

“My main criteria was if I am doing something and the song comes on I go into a coma-like trance—stop everything and just listen,” Brown said. “Sometimes I replay the song or a part of it before I can possibly move on to something else.”

“I generally love a one-name diva figure like Aretha, Beyoncé, and Rihanna, conscious hip-hop, not necessarily what you hear on the radio,” Kimbrough-Groves said. “If it involves dancing, I generally like it.”

Robert Roos
Spanish teacher Robert Roos primarily listens to heavy metal but will listen to all genres. Here are his top three songs:

“I always listen to heavy metal from the ‘70s and ‘80s especially when I’m tired and need a shot of adrenaline,” Roos said.

“My music taste is much like me: old and mellow,” Szafran said.

“I love to have dance parties with my daughters on almost a daily basis,” Brown said.

1) “Who’s in Control?” by British Sea Power
2)“Not Great Men” by Gang of Four
3)“Love Will Tear Us Apart” by Joy Division

“I have been collecting music since high school,” Jacobson said. “I have at least 5,000 CDs and vinyl records.”