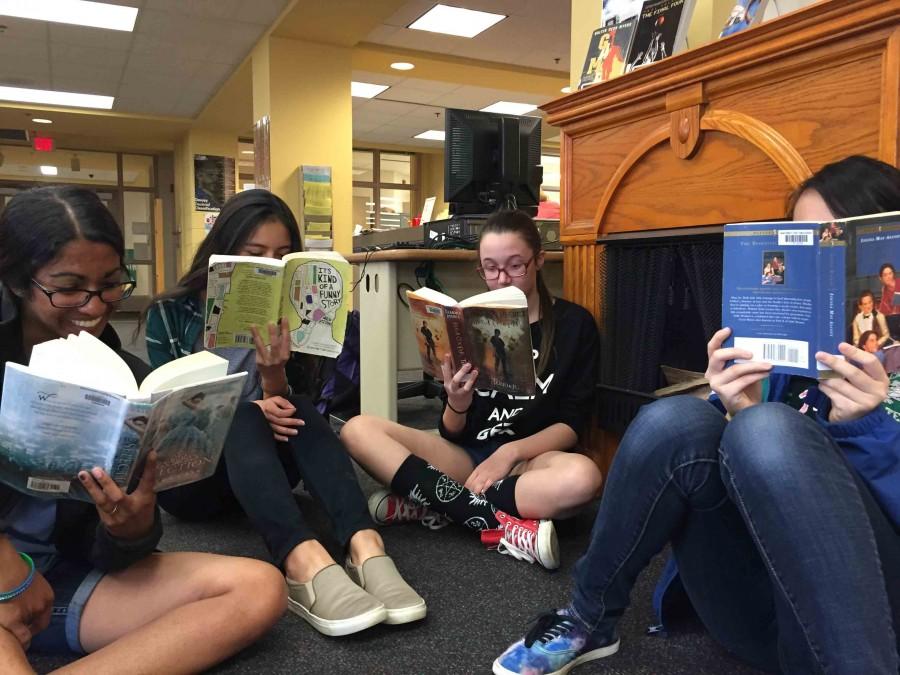 Students gather together to enjoy their favorite books, new and old.

By Alissa Li and Katie Clem

As summer rapidly approaches, students not only buckle down for the final stretch of school but they also begin to make plans for the upcoming break. Whether you find yourself sightseeing in Europe or simply lounging around at home, a book is sure to be good company. The Observer has picked out a couple of fantastic reads for the exciting summer ahead.

Little Women by Louisa May Alcott

It is easy to get lost in a world of magic with Harry, or of gripping rebellions with Katniss, but much more satisfying is a walk into the 19th Century with Little Women.

Alcott beautifully weaves together an American classic that chronicles the lives of four sisters, Meg, Jo, Beth and Amy, as they struggle to find individuality in a man’s world, an unlikely balance between selfishness and generosity, and most importantly, happiness in one’s allotted lifetime.

CHS students will easily be able to draw parallels between the glorious ups and depressing downs of these four sisters and their own lives. Little Women is unique in that the readers follow the protagonists’ lives over the course of many years, watching as the characters mature. Alcott’s character development brings her story to life and separates it from many mediocre pop culture series as a classic.

The Selection Series by Kiera Cass

The Hunger Games, Divergent and now The Selection. Kiera Cass’s book series features another dystopian world which counterintuitively combines a futuristic setting with past philosophies, but this time with a princessy twist. The Selection is set in the far off future, after China invaded the U.S. during World War IV, in a country called Illéa, which is plagued by rigid caste systems, overbearing monarchs, and most importantly, The Selection.

Readers follow the main protagonist, America Singer, as she is forced into The Selection, a competition for prince of Illéa’s hand and a crown. While she learns to forget past love and mistakes, America unknowingly stumbles upon true friends, new love, and a chance to change things for the better.

Cass delivers a well-written story, even if the dystopian plot is a bit overdone, with solid characters, weaving in just enough romance to make any reader swoon. However this is not just a romance novel, as the characters struggle with conflicting morals, a sense of duty versus individual thought and friendship versus love. All of this guarantees a fantastic read.

The Lunar Chronicles by Marissa Meyer

The Lunar Chronicles consists of three books so far, Cinder, Scarlet, and Cress, already out, and the fourth and final book, Winter, set to be released in November 2015. Meyer has the overarching theme of fairytales for her series, but each book is narrated by a different leading character, thus inspiring individuality and independence, but not always a happily ever after.

Meyer is able to entwine hope, self-acceptance, romance, strength and friendship all into truly wonderful novels that have readers rooting for the characters as they unite to stand up against a common enemy, or learning what it means to see beauty in one’s faults.

It’s Kind of a Funny Story by Ned Vizzini

As many teenagers across the nation have discovered, the pressure to succeed in school, to get a high-paying job and to live a “successful life” increases with each passing year. From juggling extracurriculars to maintaining a perfect GPA, this kind of stress has become a widespread experience students can relate to. It’s Kind of a Funny Story pulls readers into the unsettlingly realistic story of Craig Gilner as he pushes himself to live a successful life–defined by him and his friends as achieving perfect scores, getting into the right college, and finding the right job. Gilner eventually buckles under the pressure and even attempts to take his own life, so he finds himself checking into a mental hospital. The novel then details his experiences at the hospital as he attempts to see past society’s rigid structure while discovering himself in the mess.

Vizzini expertly handles heavy and delicate topics like depression and suicide as he delves deep into the roots of teenage anxiety to reveal that teens face unrealistic expectations, and that there are alternative paths to following societal conventions.

For a witty, eye-opening and heart-warming story that changes your perspective on life, look no further, as It’s Kind of a Funny Story meets all that and beyond.

As recent trends reveal, strong female leads have begun to make a lasting impact in the literary world. Tamora Pierce introduces a fierce, stubborn and determined female named Beka Cooper, who lives in the fictional land of Tortall. Beka trains as a guard for the city of Corus, duking it out against fellow trainees and criminals to become a distinguished member of the guards. Readers follow this thrilling and adventurous tale all the while rooting for this strong-minded heroine to find victory not only in her career path but also in her personal life.

A classic, adventurous young-adult read, the series contains fantastical elements that only serve to liven up the storyline even more. Pierce demonstrates that it is certainly possible to overcome seemingly endless obstacles in order to achieve one’s dream, but only with determination, strength and hard work.

The Night Circus by Erin Morgenstern

From the stunning descriptions of the fantastical circus to the enigmatic and complicated characters, readers are pulled into The Night Circus as if they are experiencing the attractions themselves. The writing is enchanting and the imagery haunting, as Morgenstern gives readers a chance to experience this strange circus for themselves, documenting the peculiar happenings of what goes on in the captivating place.

Morgenstern gives the novel a dark twist as it details the dangerous duel between two magicians. Training their entire lives for this competition, the two magicians dance around each other in a competition to the death, yet, and perhaps quite unfortunately, fall deeply in love with each other.

As they find themselves in this complex game, the lives of everyone in the Night Circus hang in the balance. Morgenstern creates a magical love story without the cheesy clichés but full of the dark twists and adventure needed for a balanced book. Whether you are searching for a love story or simply a mesmerizing read, The Night Circus will leave you on the edge of your seat in anticipation.