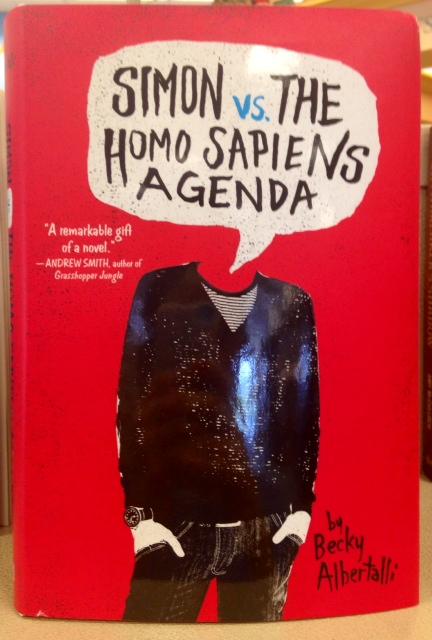 Simon must decide what to do when a kid from his school blackmails him after discovering Simon's secret relationship with his crush.

Many young adult (YA) novels rarely remain in the reader’s head after he or she turns the last page. However, Simon vs. the Homo Sapiens Agenda by Becky Albertalli, with its perfect blend of teenage angst, friendship and romance, does the complete opposite and even manages to remain in readers’ hearts forever.

Meet Simon Spier, a closeted gay 16-year-old at Creekwood High School. He has many friends and leads a relatively normal and happy life, but his private emails with Blue, an anonymous online friend who also happens to be gay, are what make him the happiest.

Simon succeeds in keeping these emails secret from his family and friends until a boy from school named Martin finds them and threatens to reveal Spier’s sexual orientation if Simon refuses to become his “wingman” for his crush, Abby, one of Spier’s friends. Simon grudgingly agrees to the blackmail but soon realizes that doing so will have disastrous consequences.

From the get-go, you realize that Simon Spier is not like many of the male protagonists in other YA contemporary books. He is fun; he is quirky; he is weird, and most importantly, he is real, as are all the other characters in the book.

The author successfully portrays all of the characters as plausible people with legitimate friendships, rather than as cardboard cutouts with feelings. With only a few words, she effortlessly evokes happiness, anger, or jealousy, and the feelings and emotions of her characters jump off the page and capture the reader’s attention.

Though much of the YA genre is known for its cheesy quotes and unrealistic situations, Simon vs. the Homo Sapiens Agenda is an anomaly, filled with heart-tugging, beautifully realistic and laugh-out-loud moments.

While Simon half-heartedly does his best to bring Martin and Abby together at school, he corresponds online with his friend Blue almost every day. His and Blue’s emails are an integral part of the story, arguably one of the best parts, in fact. The emails tug at the reader’s heart because both of the boys are at their most vulnerable, compassionate, and funny states during the exchange. Albertalli expertly captures their thoughts, feelings and angst for each other. These emails also give the reader a better understanding of who Blue is.

With the number of YA genre books ever growing, most of the plots can get predictable and somewhat repetitive, often circling around a boy and a girl. However, Albertalli introduces a fresh twist on the traditional contemporary romance between Simon and Blue, an LGBT relationship.

Simon vs. the Homo Sapiens Agenda has been getting rave reviews from across the nation, and for good reason too. This book has it all: humor, friendship, family, teenagers, high school, love and some heart-wrenching scenes. So if you’re looking for a book with any of the above, pick this one up the next time you stop by the book store.