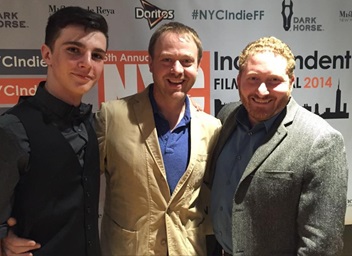 Senior Aidan Gray (left) and Scott Selman (right) founded Cue93 studios. One of their films was selected for a New York Film Festival.

Lights. Camera. Action. Senior Aidan Gray does them all. A skilled cinematographer, he tells unique stories from behind his camera, turning mere ideas into complete cinematic works. While most students are sitting in their sixth period class, Gray leaves school after his half schedule and starts working.

Once he leaves school, he goes from student to Director of Photography at Cue93 Studios, a film production studio which he co-founded in March with former media services technician Scott Selman. At his intern job, Gray works on lighting, design, filmmaking and editing for everything from commercials to documentaries.

“My personal philosophy is that the world is too big to film from one angle,” Gray said. “My favorite part of what I do is that I get to tell stories from unconventional perspectives, whether it be by avant-garde lighting or different experimental techniques.”

Gray worked on a short film with Cue93, “An Accidental Memoir,” which was selected for the world premiere at the New York City Fifth Annual Independent Film Festival in October. The film follows the story of a traveling book that links the personal histories of a group of strangers, thus creating an “accidental memoir.”

“Seeing the film premiere felt great,” Gray said. “However, watching it play wasn’t really the best part—it was knowing that we took a risk and dove into something head first, not knowing or expecting anything to come from it. And to get the call that we got into NYCIFF and realize that we succeeded as a creative team—that was probably the best part.”

As with all things great, Gray’s cinematography career had humble beginnings. He became interested in film in the fourth grade, when he and his friend Pablo Roa started a show on YouTube called “The Pablo Show.”

According to Gray, at that point, he knew that film was what he wanted to do, and it was just a matter of specializing and performing harder jobs from there.

“As long as I’ve known Aidan, he’s known exactly what he wanted to do and what it was going to take to get there,” Selman said. “Obviously anyone can pick up a camera now and tell a story, but it’s about how you tell that story and your process that really makes it something special.”

Aside from “An Accidental Memoir,” Gray recently filmed an entry for the Doritos “#CrashtheSuperBowl” advertisement contest. Some of his other past projects include the films: “Sixty-Four Squares,” “Another Superhero Story,” “The Silence,” “Unplugged,” “Times of Their Lives,” and “A View to Die For.”

As for the present, Gray is currently in post-production for Cue93’s “To Neptune, on the Night Before the End,” a longer film that he started shooting in July and is projected to be released in January.

Cue93 crowd-funded around $4,155 on Indie Go-Go to fund talent and equipment expenses for the crew and the nine person cast.

At the age of 17, Gray’s versatility as a cinematographer is astounding, according to Selman.

“For someone so young to have such a great concept of how to visually capture story material—it can only be attributed to his focus and passion for cinematography,” Selman said. “He’s someone who can sit down at a table with people twice or three times his age and talk with them as equals—and he is always working hard to find interesting and inventive ways to do his job.”

As for the future, Gray plans to continue down the path he’s started, wherever it may take him.

“First and foremost, I want to learn as much as I can,” Gray said. “Whether or not this involves film school or college education is really a matter of opinion and it’s an opinion that I’ve yet to form. In 10 years, I’d be very impressed with myself if I was the director of photography for at least one over $1 million film. As far as what I do after that, that’s up in the air. My life dream is to become a member of The American Society of Cinematographers and be able to give back to aspiring cinematographers like me.”