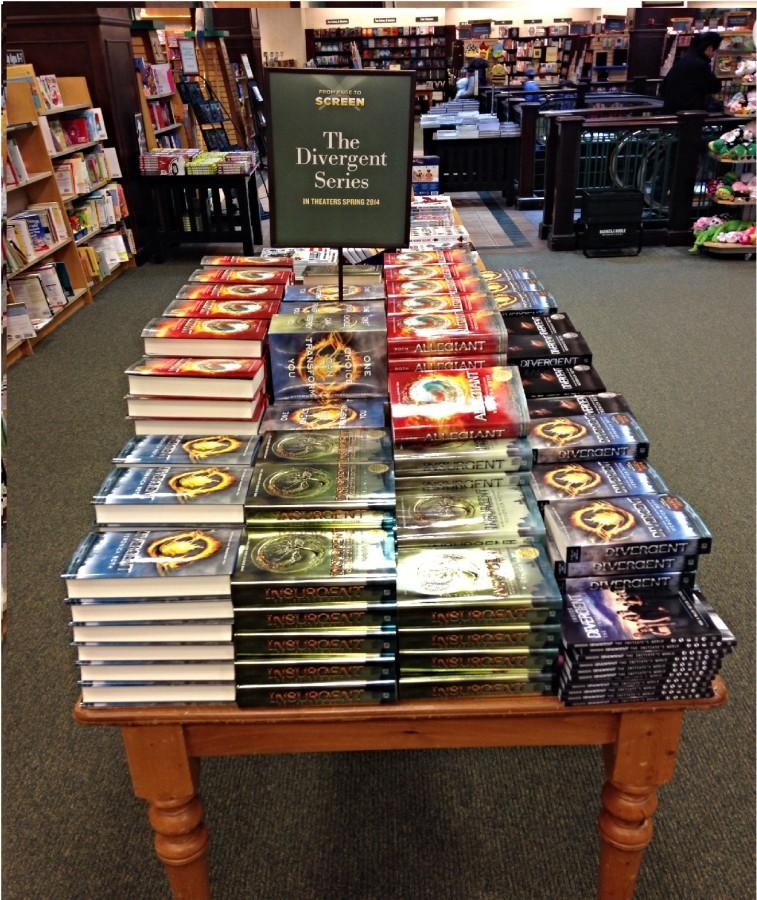 Devotees of Katniss Everdeen and her Hunger Games crew will fall in love with the similar dystopian Divergent trilogy.  It features love, action, friendship and secrecy–what more could a teenage girl want?  Fans of the books will be heading to theaters March 21 to see their beloved Beatrice Prior and others come to life on screen.

The three-part series written by Veronica Roth has gained incredible popularity among CHS students who are captivated by the books’ unique characters, distinctive setting and well thought-out plotline.

“I loved the book series so much that I read all three of them within the span of a week,” senior Amy Dalrymple said.  “They are very well-written, and the plotline has so many twists and turns that it just made me want to keep reading.”

The first book of the series, Divergent, released in February 2012, follows Beatrice Prior’s journey in the future dystopian Chicago.  The city is divided into five factions: Candor, Abnegation, Dauntless, Amity, and Erudite.  The citizens of each faction dedicate their lives to particular virtues, which are honesty, selflessness, bravery, peacefulness and intelligence, respectfully.

On her 16th birthday at the Choosing Ceremony, Beatrice must decide which faction to dedicate herself to for the rest of her life.  She is torn between staying with her family in the selfless Abnegation faction and joining the brave Dauntless faction.

As she is initiated into her faction, Beatrice not only changes her name to Tris, but also her entire identity as she meets new friends, enemies  and even a love interest.  She must also hide a secret that could mean life or death for both her faction and herself.

“Divergent shows the development of Tris and how she faces fears and dangers, all while developing friendships and trying to save her relationships with her family,” senior Helen Gomez said.  “Out of the trilogy, Divergent is my favorite because it focuses on psychology and the way a person thinks without trying to accommodate society’s wants.”

The second book, Insurgent, released in May 2012, continues the plotline of Divergent.  Tris must face the consequences of her previous decisions, dealing with conflicts between factions, broken relationships, loyalty and exposed secrets.

“Insurgent is still amazing because the relationships among the characters become so complex, like when Tris is trying to find a way to make herself useful while [her love interest]Four tries to show her the difference between giving up and self-sacrifice,” Gomez said.

The final installment of the series, Allegiant, was released in October 2013.  When Tris tries to create a simpler life for herself, things only get more complicated.  The controversial ending of Allegiant sparks intense emotions among many die-hard fans of the series.

“The second and third books were very good, but in my opinion there was not enough of a solid plotline in them,” Dalrymple said.  “At first, I really did not like the ending, but now that I have had time to think about it, it really was not all that bad.”

The Divergent series fandom is strong and has continued to grow.  From Tumblr posts to Pinterest pins to Facebook pages, fans have more than enough places to share their love for the books online.  Many have also chosen to write fan fiction based on the novels.  Fan fiction are stories created by someone other than the author of a book that are based on the original characters or plot.

“I follow Veronica Roth on Tumblr and Twitter, the Divergent movie on Twitter and many fandom blogs on Tumblr because I like discussing the series with fellow readers,” Gomez said.  “The people are so nice and it is amazing to talk about the series without being weary of spoiling it for others.”

Fans of the series are ecstatic about the release of the Divergent movie, which hits theaters this Friday.  Shailene Woodley (The Secret Life of the American Teenager, The Fault in our Stars) stars as protagonist Tris.

The rest of the cast is also star-studded.  Theo James (Underworld: Awakening, Golden Boy), Miles Teller (The Spectacular Now, That Awkward Moment), Kate Winslet (Titanic, Labor Day) and Ansel Elgort (Carrie, The Fault in Our Stars) among others will join Woodley on the big screen.

“I think Shailene Woodley is a great choice for Tris because she resembles her simplicity yet butt-kicking attitude,” Gomez said.  “I think Theo James will also be amazing as Four because he seems older, stronger and more intimidating.  Four is very mature and rarely looks his age, so I think Theo will be great.”

Many CHS Divergent fans plan to catch the flick on its premiere night at local theaters.  Some even plan to dress in accordance with their favorite characters or based on the factions they feel the most allegiance to.

“I am 100 percent seeing the movie,” Dalrymple said.  “As with any book-turned-movie, I love comparing what the book had that the movie did not or vice-versa.  I think there will definitely be some changes, but I am expecting it to be a very good movie.”