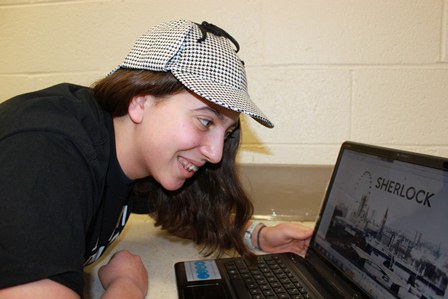 Boxy black letters appear on the screen, accompanied by the view of a London skyline. A simultaneous “Shhhhh!” can be heard around the room. The lights dim. BBC Sherlock begins.

After an excruciating two-year hiatus, Season Three of BBC Sherlock premiered Jan. 19, bringing Sherlock fans together to watch and share in the excitement. The British television hit features a modern adaptation of the legendary Sherlock Holmes and his faithful friend, John Watson. But what is all the hype all about? What has got Sherlock fans so psyched for the new season? Reader be warned: spoilers follow.

“It took so long to come out, and the cliff hanger at the end of Season Two was so hard to deal with, but I really think the wait was worth it,” junior Katie Kidney said. “This season does not disappoint.”

Freshman Carolina Rios agrees. According to Rios, the three new episodes were “hilarious and life changing.”

Writers Stephen Thompson, Steven Moffat and Mark Gatiss are notorious for ending season finales with cliffhangers, choosing to end Season Two with a close-up of an alive Sherlock Holmes following his supposed suicide jump off a rooftop.

“Having read the books, even though I knew he was going to fall and rise again, I was still sobbing the entire time,” senior Elena Freije said.

During the hiatus, Sherlock fans relied on fellow-obsessed “Sherlockians” and social media sites like Tumblr for discussions and “fangirl” sessions.

According to Freije, Tumblr plays a huge role in the Sherlock fandom, which consists of “terrifyingly creative” fans who acted like a “massive support group” through the long wait.

Fans came up with theories of his survival right up until the premiere of Episode One, which included multiple scenarios of how Sherlock faked his death, each one more bizarre than the last. In the end, the episode never really confirmed which one had occurred.

According to English teacher Naomi Ratz, it was a little frustrating that “they didn’t come outright and say, ‘This is what happened,’ but the theories shown were intriguing.”

“Amanda was perfect,” Freije said. “I fell in love with the character as soon as she walked on screen.”

However the highlight of the episode was John and Sherlock’s reunion, which consisted of shouts and punches rather than smiles and hugs.

“It was really well done,” junior Kyle Parisi said. “A positive response would have been cheesy, and John punching Sherlock is more realistic.”

The second episode revolved around Sherlock’s best man speech at John’s wedding to Mary. His lack of social skills combined with his burgeoning emotional side made for a heart-wrenchingly adorable delivery. The speech took viewers through multiple flashbacks of his life with John, the most memorable one being the stag, or bachelor, night.

“It’s funny and so sweet,” Ratz said. “You can see that Sherlock is trying so hard to connect what he knows about science to what he thinks is fun.”

The tear-inducing, emotion-ridden season takes a darker turn in the season finale, “His Last Vow.” A new villain, journalist and blackmailer Charles Augustus Magnussen, is on the scene, and is the cause of shivers up spines and goosebumps up arms.

“You want to hate him, but he’s brilliant and has a mind that rivals Sherlock’s,” Rios said.

However, Magnussen was not the only one who turned out to be full of secrets. In a stunning turn of events, Mary Morstan is revealed to be a former assassin. Suddenly, nothing is as it seems. Who is Mary really? Turns out, no one really knows.

“Everyone has a past,” Ratz said. “And even though she lived as an assassin, she proved that she wasn’t trying to manipulate anyone.”

True to form, Sherlock writers delivered a final blow to the show’s viewers before leaving them to wait in agony again. The last few moments shocked audiences with a video of supposedly dead-and-defeated Moriarty, the psychopathic villain from the first two seasons, simply asking, “Did you miss me?”

To this, the entirety of the Sherlock fandom cried out, “Yes!” in unison.

According to Parisi, it will be great to have Moriarty back.

“He’s not a classical villain,” Parisi said. “He’s crazy, and you don’t know what he’s going to do next.”

The return of Moriarty also raises questions and concerns about what will happen in Season Four.

According to Freije, Season Four will consist of “Moriarty videos everywhere and London in chaos.”

Judging by the pandemonium caused by the finale, Freije’s prediction may just be spot-on.  However, Sherlock fans may have to wait for quite a while, as each season so far has been separated by two years. In the meantime, fans will have to enjoy their long-awaited Season Three for just a little longer.

“Season Three was emotional, witty and thrilling, and everyone should watch it,” Kidney said.