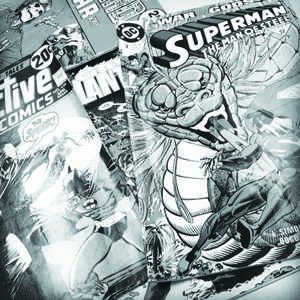 By By: Ariana Etessami, Staff Writer

Parents could easily put together a long list of complaints regarding their kids’ undesired habits and behaviors these days. There’s the classic texting-under-the-table epidemic, and then the bringing-home-boyfriend-with-nose-piercings-and-tattoos outbreak. A more recent addition to this list is comic books. And no, not those cute, innocent Archie comics.

According to Death and Taxes, a website discussing entertainment, news and politics, DC Comics, one of the biggest comic book companies, has recently revamped its most popular comic books to include more violence and sexuality, and has flaunted them in the face of their greatest competitor, Marvel. This move has caused much commotion among the parents of young comic book fanatics.

The new DC Comics maintain traditional plotlines, but their major appeal has slightly shifted from the text to the graphics. No longer are comic books for children—they have evolved into two distinct classes: the classic children’s comic and the adult graphic novel.

Flipping through an old Batman comic from the ‘60s, one would notice a few glaring differences from the new issues.

First, the old comic featured action words like “Wham!” or “Boom!” to depict the sounds of the fights between Batman and his enemies. In the new issues, these words are replaced with detailed illustrations of blood, gore and other unpleasantries.

Child psychologist Neil Bernstein believes that comic books like these are not suitable for teenagers, especially younger ones.

“New comics are especially bad for younger teenagers because it’s too much for them to digest,” Bernstein said. “The problem is that kids get excessively exposed to violence, [which] could increase the likelihood of behaving accordingly.”

Another aspect of the new comic books that almost instantly draws the reader’s eyes is the sex appeal of female characters. The voluptuous depictions of women warp younger readers’ views of women, and these images insinuate that in order for women to have power and influence, they must look and dress a certain way.

According to Bernstein, these new comic books “emphasize a lot of sex, and don’t represent [realistic] relationships.”
But is DC Comics to blame for what kids are now reading?

Greg Bennett, co-owner of Big Planet Comics in Bethesda, believes that the parents are responsible for what their children are reading.

According to Bennett, there are comics for kids and comics for adults, just as there are television programs or movies that may not necessarily be suitable for kids.

“I think the content [in DC Comic books] would be equivalent to a PG-13 movie rating,” Bennett said.

Some readers like the new style, claiming that it makes the comic books even better.

“It’s really cool to see some of the old American favorites getting a contemporary upgrade,” senior Aura Chapa said.

Though some comic book companies are looking for various new ways to appeal to Americans, others are choosing to stay the same. No matter how much comics may change, they will still have the approval of true comic fans, and this will save them from the criticism of worried parents.