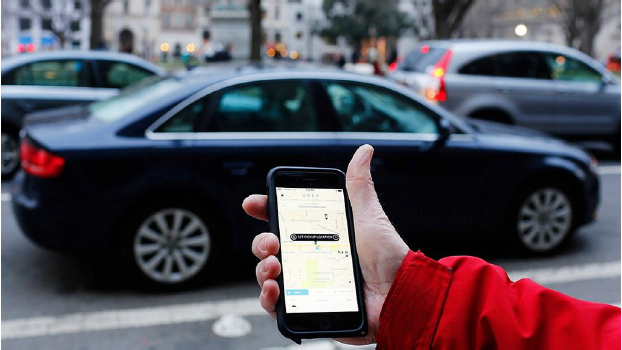 Someone uses the Uber app to call for a ride.

Although many CHS students use Uber, they may not realize that one must be 18 in order to ride Uber unaccompanied, according to Uber’s terms and conditions.

Most CHS students are younger than 18 but rely on Uber for transportation, along with the assumption that their rule will not be strictly enforced.

“I had absolutely no clue about this rule,” senior Lydia Bradley said. “That’s so strange because no driver has ever mentioned that to me.”

Many CHS students use Uber to get to and from school and to get lunch. However, for the amount of CHS students using Uber, it is unheard of for a student to not be given a ride because of the apparent age restriction.

According to the Uber website, the service is not available for use by people under 18. Also, people under 18 cannot use a registered members account, but they can use the account if accompanied by someone with one.

This rule doesn’t seem to be enforced anywhere, as Uber is widely popular worldwide, especially in Washington D.C.

According to a March, 2015 Washington Post article, Uber had no comment on the issue of age limitations and many parents interviewed were unaware this rule exists.

While many CHS students use uber a lot and had no idea about this rule, this new information may not influence their decision in using Uber.

“I don’t think this will affect my decision to use the app,” sophomore Michael Kalin said. “I usually just Uber with friends. I would probably still ride alone though.”

Lyft, Uber’s biggest competitor, has the same rule, but does not enforce it either.

Uber is also establishing a new service called UberFamily, which allows parents to order cars with car seats and tablets. This is not promoting a breach of the rule, however, according to sophomore Alec Velikanov.

“The service is promoting children far younger to ride the service who would under no circumstance be riding without a parent,” Velikanov said.

Uber does not enforce this rule, yet they do have a consequence for breaking it.

According to Uber’s website people may be asked to provide a proof of identity in certain instances and if that person refuses, then Uber may deny you access to use of their service.

Even with the knowledge of these rules and consequences, it doesn’t seem to deter anyone away from using the service.

“I honestly don’t really care about this rule,” Bradley said. “No driver has ever kicked my out of their car, so I’m still going to use Uber as much as I usually do.”