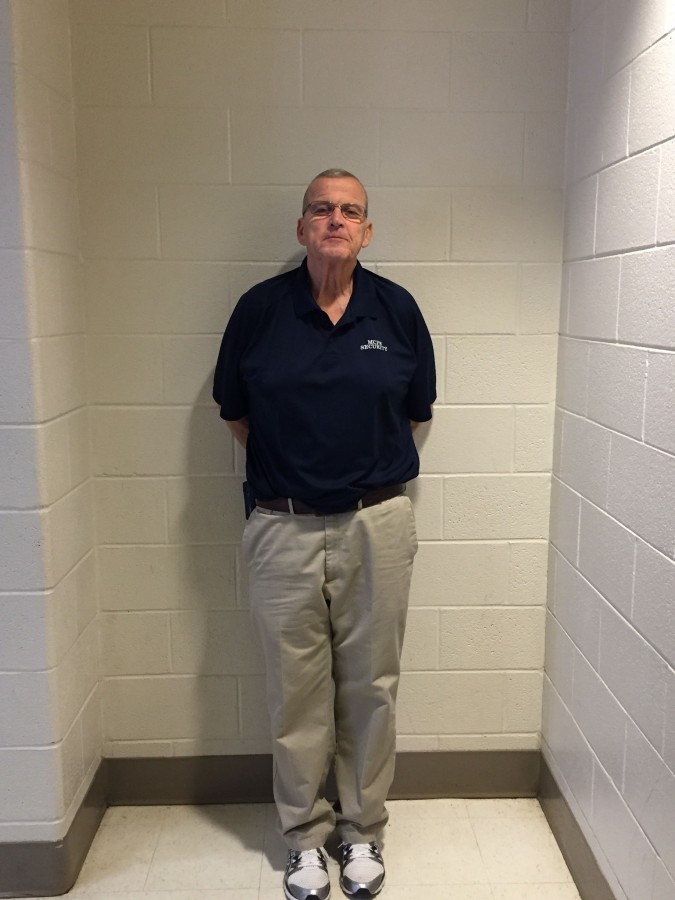 Security guard Craig Stewart was selected as this year's SEIU 2016 Supporting Services Employee of the Year.

The SEIU and the Montgomery Business Roundtable for Education (MCBRE) established the award to select the employee who best exemplifies the motto, “Education Works Because We Do.” Nominees are judged on a variety of topics such as initiative, creativity, dedication and contribution to the students, staff and the broader community. The nominees must also have respect and admiration from others.

“I was stunned,” Stu said. “I have never won anything in my life, so this award is very nice.”
Four fellow CHS staff members nominated Stu for the award, including Principal Joan Benz.

According to Benz, main office Secretary Patrice Thomas first proposed the idea to nominate Stu. Thomas then organized the group of four staff members to support the recommendation.

“I get excited when I talk about Stu,” Benz said. “Stu has incredible commitment and dedication. He is one of the key people in the school who lets us, the students and staff, have a very safe environment at CHS.”

Stu’s commitment and dedication to CHS is shown through his stellar career. He has been working at CHS since the fall of 1977, leaving for only a year in 1980.

Throughout the 38 years he has dedicated himself to CHS, Stu has no complaints when talking about his job.

“I’m very grateful that CHS does not have a lot of major problems like other schools do,” Stu said. “The best part of my job is interacting with the students and staff because I like the CHS community, and that’s why I’ve been here so long.”

Many of the staff members have been influenced by Stu’s dedication to the school.

“I’ve worked with Stu for over 20 years as his supervisor,” Security Team Leader Terry Bell said. “I consider him second in charge. He will go out of his way to be friendly towards a student and be helpful.”
Stu’s dedication is appreciated by not only the staff but also the students.

“I remember one morning junior year, I had walked into school after a night of getting next to no sleep because of homework,” senior Isabel Jordan said. “Stu saw me and pulled me aside and asked if anything was wrong, if I was okay and that I could talk to him whenever I needed to. I really appreciated and needed that, and I think it’s amazing that we have someone at CHS like Stu to remind us to always be kind, compassionate and gracious to others, no matter the circumstance.”

In addition to taking care of staff and students during the school day, Stu’s devotion to CHS extends to the evenings with his help in the athletic department.

“Stu plays a major part in the athletic department and for athletic events,” Bell said. “In terms of assisting the athletic director, he’s the number one guy. He is very dependable, and CHS is like his second home.”

According to athletic director Scott Rivinius, he has worked more hours with Stu than anyone else in the building, and he loves it. Rivinius acknowledges how dependable and knowledgeable Stu is and cannot think of anyone else more deserving of the award.

During a regular staff meeting in the auditorium Mon. Feb. 8, Benz announced Stu as the winner for the SEIU award in front of the whole staff.

“Dr. Benz made me come down to the front of the auditorium with her,” Stu said. “She announced the winner of the award, and I received an ovation. It was very nice for the staff to do that.”

Stu will receive a $1,000 cash award and the MCBRE will donate $1,000 to any MCPS school Stu selects, which he has decided will be CHS. He will be officially recognized and honored for the award during the Champions for Children Gala May 5 at Wheaton High School.

“I’m going to take my family with me,” Stu said. “My wife, daughter, two sons, daughter-in-law and grandchild. They are really happy for me.”

The CHS community appreciates the hard work that Stu has put into this school throughout his career.

“As a security guard, Stu is responsible for our physical safety, but his immense talent for making people feel valued offers a different kind of security,” senior Alexandra Conway said. “Stu makes you feel important, confident, and cared about, and that’s what makes him such a beloved member of the Churchill staff.”