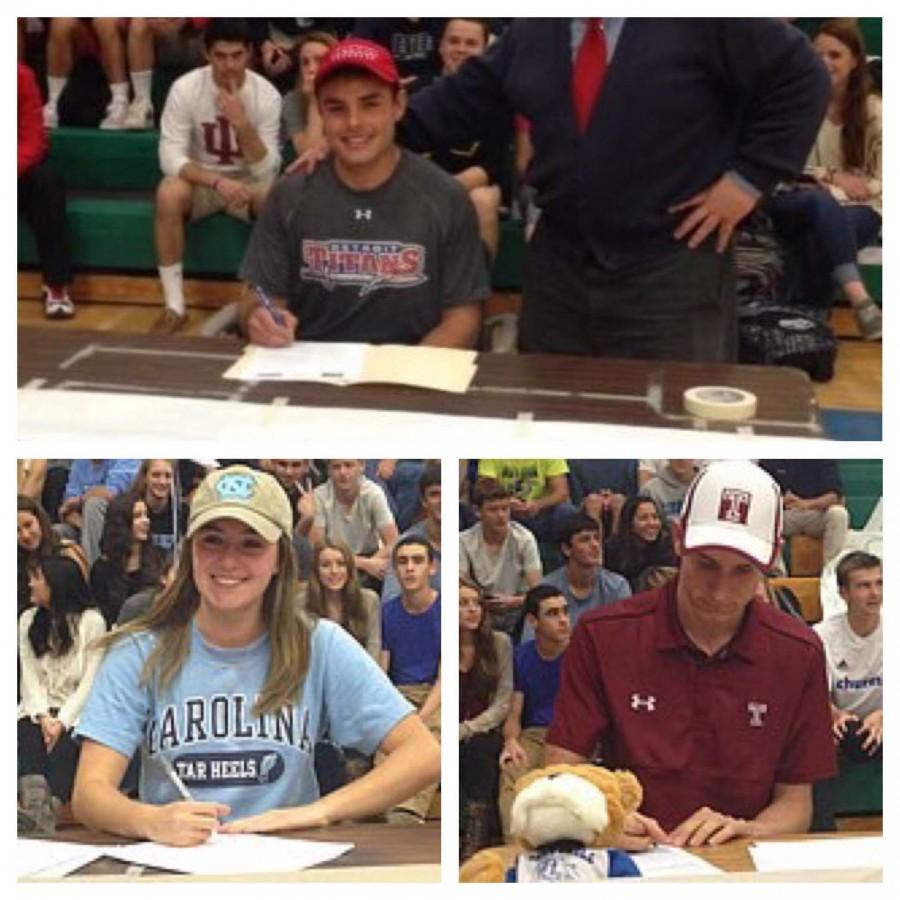 By Cristian Edwards and Nathan Gertler

For most high school athletes aspiring to further their athletic experience, the next step is to play in college. However, the cruel realities of college recruiting serve as a daunting process for students.

Each sport has its own unique rules, regulations and flaws in terms of the high school recruiting process.

However, before we delve into the complexities of the process, it is imperative to know the different divisions within the NCAA.  Division I (D1) represents the smallest number of athletes as well as the highest level of competition and can offer a certain amount of full or partial scholarships, depending on the sport. Division II (D2) is a step-down from Division 1, but D2 schools can also offer full or partial scholarships to athletes.  Finally, Division III (D3), the largest division of collegiate athletics, can offer no scholarships of any kind.

While each of the 23-sponsored NCAA sports is different in terms of its recruiting process, D1 mens basketball stands out from the pack in terms of the length of time they are given to recruit.

Mens basketball has exceptions when it comes to off-campus contact with prospective athletes. These exceptions include official visits and the materials the athletes can receive from coaches.  In D1 basketball, recruits are given longer time to be evaluated and/or contacted by coaches and scouts.

The reason for this is no secret. D1 basketball generates the most revenue for the NCAA than any other sponsored-sport. The NCAA D1 basketball tournament alone generates roughly $900 million each year, so of course, the NCAA has no problem granting extra time for college to recruit these money-making athletes.

According to NCAA.com, the official live recruiting and quiet periods for D1 basketball make it difficult for coaches to consistently and continuously view their prized athletes.

However, there are loopholes to this, and most of these loopholes run through the Amateur Athletic Union, or AAU. This club basketball organization is notorious for getting its athletes the “best exposure available” to college coaches—most of the time illegally. AAU coaches will often be the middleman between the athlete and college recruiter before recruitment is allowed between the two.

Additionally, AAU teams can often be funded by sports agents or even boosters from the school trying to recruit the athletes. Most of the time, these agents or AAU coaches will expect to receive a cut of the player’s future earnings. In drastic cases, AAU coaches will actually become assistant coaches of college teams just to get an athlete to commit to that school.

While some college basketball coaches, such as former University of Maryland head coach Gary Williams, have steered clear of AAU, it is still widely used as a way to recruit athletes. The AAU should be disbanded completely, and colleges should only look at high school sports programs in order to recruit players.

Along with basketball, football is the other huge, revenue-generating sport for the NCAA.

However, unlike basketball, D1 football recruiting begins during a player’s junior year or high school, rather than their sophomore year.

Additionally, similar to D1 regulations of the other NCAA sports, official visits are only allowed on the first day of classes during the recruit’s senior year. This is annoying for recruits, as they have little time to plan each college visit, and have have less time to choose among schools.

Although the NCAA clearly states the recruiting regulations and restrictions, some football teams and players tend to ignore the rules. From the infamous Southern Methodist University scandal of 1987, where the athletes were being paid to play, to the more recent affair, where Reggie Bush allegedly accepted gifts from boosters and sports agents at USC, football programs recruit the players they want, regardless of the rules.

At both SMU and USC, this meant opening up their wallets.

According to the Dallas Morning News, while already serving time on probation as a university, SMU was discovered to have paid $61,000 to 13 players to ensure their commitment to the school.

Although it is illegal to pay players to get them to commit to a school, conversations on the matter have risen largely in the past couple of years.

Expanding like no other, lacrosse’s recruiting policy is very confusing and complex, with 69 D1, 59 D2, and 223 D3 programs sanctioned by the NCAA.

Although mainly played along the East Coast, lacrosse has begun to expand more and more toward the Midwest, the West Coast, and even Canada. With limited high school athletes playing lacrosse, major D1 schools like Virginia and Johns Hopkins fight tooth and nail to get as many recruits as early as possible, even if they haven’t stepped foot inside of a high school.

Major D1 schools recruit athletes as early as the summer leading up to their freshman year of high school, completely filling up their spots with 14-year-old kids whom they hope will get better within their four years of high school.

This process has a multitude of issues associated with it.

Most of the time, the athletes are too young to know what to look for in a college, and simply listen to the speculation surrounding their recruiters. Secondly, D1 programs often can’t consider athletes who blossomed later in their high school career because all their spots are filled with so-called “prodigies.” Lastly, an athlete who committed his freshman year might have a career-ending injury or have a sudden change of heart but is already stuck with their decisions.

In 2015 alone, there have been more D1 athletes withdrawing their verbal commitment and changing to another school than ever before.

With the criticism that colleges have endured over the years, the NCAA came out with rules and regulations against this early recruiting; athletes cannot talk to any college coach directly until Sept. 1 their junior year of high school. Also, the NCAA has implemented a system of dead periods in which there can be no contact between either side for a certain number of weeks or months at a time.

This does not stop the early recruiting, it just forces recruiters to find elaborate loopholes.

Even with the rules preventing direct contact between the athlete and the recruiter, athletes are still verbally committing to schools earlier than ever.

How, you might ask? The major loophole with this rule is that the athlete’s high school coach can become a middleman for the whole process, exchanging conversations and relaying messages between student and coach.

This entire system needs revamping. The NCAA should release more strict regulations regarding recruiting, and needs to do so before D1 schools start recruiting middle schoolers.

The NCAA should prohibit athletes from verbally committing until their junior year of high school, This allows the athlete to fully grow into their body and completely rise to their potential, while not taking time away from the college’s ability to recruit.

D2 and D3 thankfully, are more lenient with recruiting. With over 200 D3 lacrosse programs, the schools usually start recruiting during the athlete’s junior and senior year, and they rarely recruit before that.