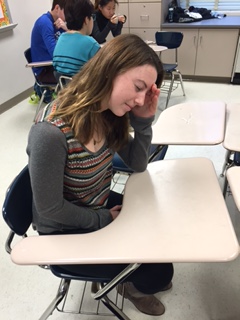 Junior Bridie Dunn struggles to concentrate in class despite the heat.

CHS continues to experience maintenance problems with the heat and air condition systems, leading to faculty and students sweltering in classrooms.

Hot conditions in the classrooms began Nov. 17 and lasted until Nov. 21 when Principal Joan Benz announced that maintenance fixed the heating and air conditioning systems; however, the problem returned shortly after.

“A mechanical piece was fixed but it is now broken again,” Benz said Dec. 8. “The system has been an ongoing problem.”

When CHS finished remodeling in 2002, new sections of the building, such as the guidance hallway, were built and therefore a new heating and cooling system was added. However, the heating and air conditioning throughout the old parts of the school remained the same, causing problems between the two.

According to building service manager Angel Delgado, the problems created between the two systems is common and can easily be fixed. Mechanical equipment can experience problems at any moment, be it related to either an electrical or mechanical problem.

Although the problems that the heat and air conditioning systems experience are common, the time period before maintenance repairs the system can create an uncomfortable setting for teachers and students as the heat can be unbearable.

The classroom conditions lasted three days, leading some teachers and students to believe that CHS administrators may have taken too long to respond to the problem.

“The classroom felt like a sauna,” junior Brighid Dunn said. “It was also worse because everyone was dressed warmly since it is winter.”

Although there is a waiting period for maintenance workers to come and fix the system, the heat decreased throughout the school after Dr. Benz’s announcement.

Some still believe there is work to be done in order to avoid a repeat of this situation in the future.

“There are plenty of steps that need to be taken so that changes can be made,” Modern World History and Philosophy teacher Evan Rosenthal said. “However, I do feel that the school took the necessary steps to help to remedy the situation.”

As of Dec. 15, the heating and air conditioning systems are not fixed. According to business manager Lisa Wellek, she held a meeting with representatives from both the Maintenance Department and Energy Management to discuss the ongoing problem with the systems.

“I felt it was important to get everyone in a room together to explain the situation,” Wellek said. “We developed a ‘plan of attack’ from which permanent solutions can be developed and attempted.”