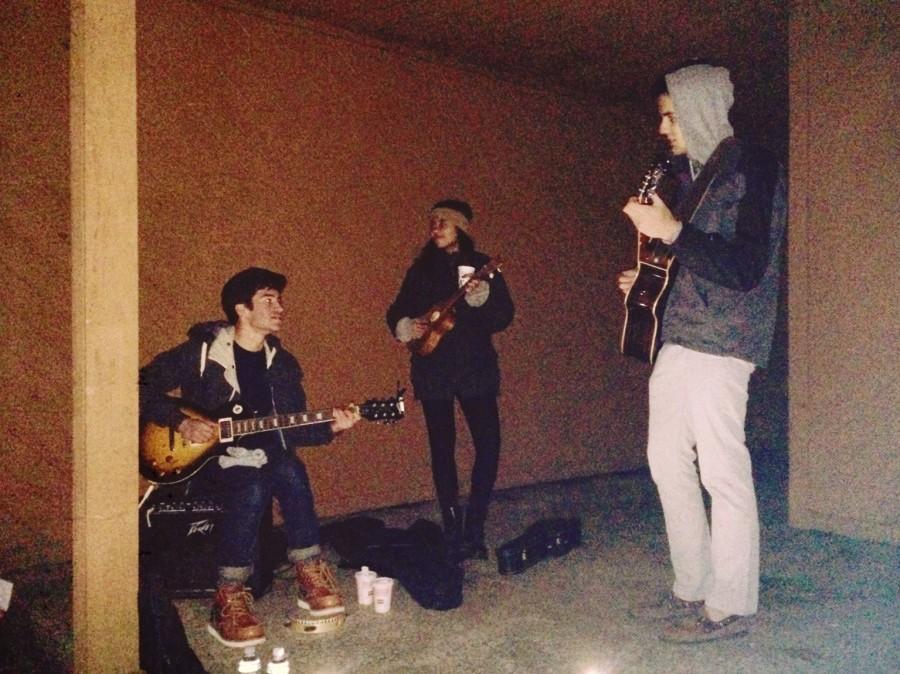 Dhingra (center) makes a brief appearance on stage, strumming a ukulele along with the guitar-performing duo Dec. 10.

Had you peeked into Cabin John Park during the early evening of Dec. 10, you would have found a bundled-up group of students laughing, listening to live acoustic and sipping hot cocoa.

“It’s different than what we normally do,” said senior Sophie Ascher, who serves as editor-in-chief of the magazine. “The park provides for a much homier, comfortable atmosphere than what you would typically find at a high school fundraiser.”

Attendees gathered around the park-provided stage with cookies and hot chocolate sold at a dollar each, as seniors Spencer Mehdizadeh and Dan Leptoukh performed together on the guitar.

“It was really cold out, but it was nice playing for friends while also helping raise money for the magazine,” Leptoukh said.

According to senior and publicist specialist Tanya Dhingra, this festive event paired nicely with the spirit of winter.

“I call it the ‘forgotten magazine,’” Dhingra said. “A lot of amazing writers and artists are published. We put a lot of thought into it every single year, and it definitely brings out a lot of great ideas that I hope will be recognized in the future.”

The fundraiser’s uniqueness is what brought seniors Angad Kalsi and Nick Adimi to the park.

“Someone handed me a flyer the other day and I knew I had to check it out,” Kalsi said. “The magazine had never really been in my radar, but I’m glad it caught my attention because I was happy to support such an underrated, creative group of students.”