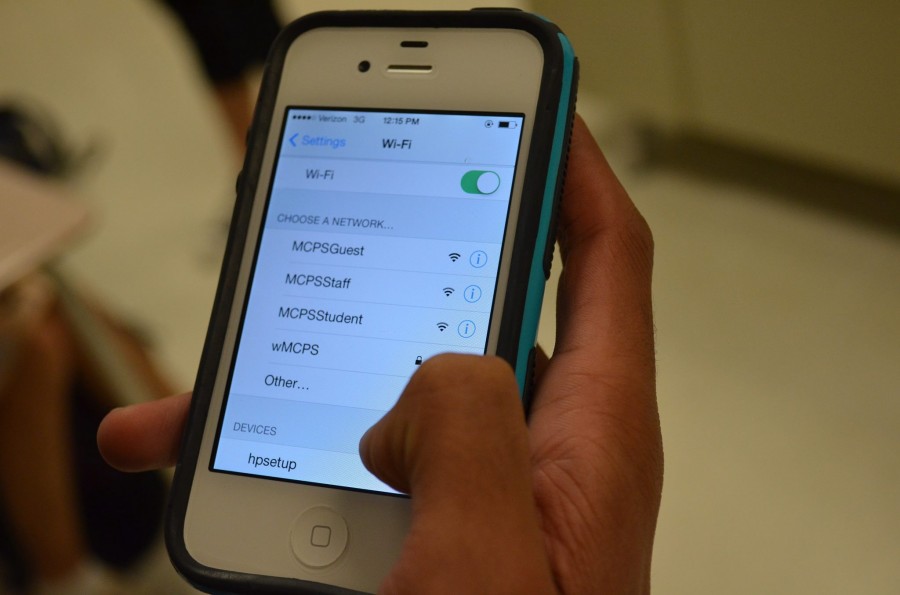 Before the installation of Wi-Fi at CHS, biology teacher Wendy Saoutis had to take her students to the computer lab whenever they needed to do research.  Now, Saoutis just has to tell her students to take out their cellphones.

Students and faculty can now use the wireless internet connections MCPSstudent, MCPSguest and MCPSstaff on mobile devices at school.

According to Jones, this action levels the playing field for students who require stable Internet connection in a work environment such as school.

“Only in the last two years has MCPS pushed for public access,” Jones said.  “It requires plenty of cost and management to have over 2,000 devices, or one for each student, on the plan.”

According to Jones, the installation of the hardware system to support public access to Wi-Fi has been a lengthy process for MCPS because of the rapid speed at which technology becomes obsolete.

Students expressed their support of the installation of MCPS Wi-Fi because of its convenience.

“The Wi-Fi is very helpful because not having it previously posed a problem for cell phone use,” senior Ruchi Mathur said.  “I no longer have to worry about wasting my cell phone data while checking Edline.”

However, according to junior Josh Freilich, the wireless connection is not without its drawbacks.

“It seems to make some apps inaccessible, even during lunch, and you must agree to the terms and conditions each time you connect,” Freilich said.

According to senior Hannah Yasharoff, classes such as Journalism will benefit from the implementation of Wi-Fi.

“It allows me to do my job as public relations and social media editor of the Observer all day instead of just after school,” Yasharoff said.  “Since Journalism is moving to more of an online medium, it is more convenient to be using the Wi-Fi every day.”

In addition to public Wi-Fi connection, CHS will receive Chromebooks, laptops that run solely on Google applications.  Each social studies classroom will receive a set for classwork by the end of this school year, allowing other classes to spend more time in the computer lab and Media Center.

Every CHS student will also receive his or her own Gmail account to use for the creation, storage, and transfer of files as well as to communicate with others. Students can access these personal accounts online by signing in with their username, the domain mcpsmd.net and their password.

“The idea behind the Chromebooks is the same for the Internet access for students, which is to do work,” Jones said.  “It also streamlines the amount of software needed.”

Jones expects CHS to have about 300 laptops by the end of this school year for teacher and student use.

Teachers and students in every class will be able to use Google software such as Google Docs and the web browser Google Chrome during lessons as part of the curriculum with Chromebooks.  If the teacher wishes, students will be allowed to take notes on the laptops during class.

“We can use the Chromebooks for activities such as practice assessments and analyzing documents from public sources,” Forney said.  “They will also save paper.”

MCPS also plans to provide Chromebook sets to all English classes by the end of next school year, which will bring the total number of laptops in the school to about 1,000.

CHS will pay Google for its own domain, which was prevented by state laws until recently.

According to Jones, all Google applications have ultimately been provided to support class instruction.  Teachers will have the tools for full access by the end of the year, thus allowing them to send and receive documents from students as well as read files.