Teachers say goodbye to CHS after years of teaching 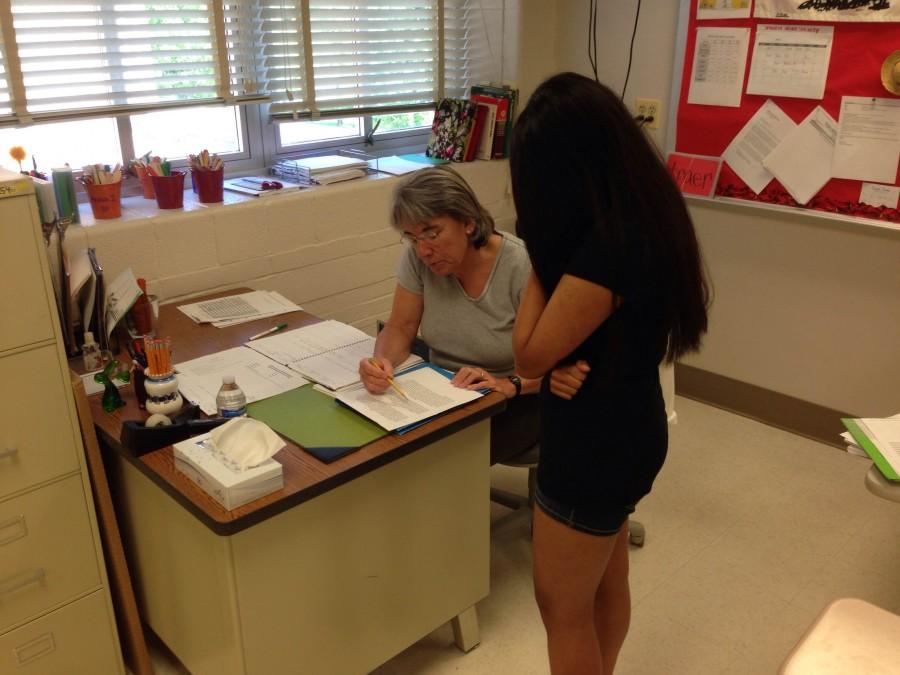 After 35 years at CHS, spanish teacher Gayle Jones will retire at the end of June.

CHS hired Jones for her first teaching job in February 1979 after another employee was transferred.

“Spanish isn’t the only thing I’ve taught,” Jones said.  “I was a double major in college so I’m dual certified in Spanish and political science.  I have taught U.S. History and there used to be a course called Law-Related Education, and I’ve taught NSL Government and Spanish 1, 2, 3 and 4.”

Jones has also been involved with several extracurricular activities at CHS.

“I remember she once told my class about how she wanted to open a restaurant or hotel by the ocean, and I really hope she gets it because she’s probably one of the best teachers I’ve ever had,” junior and incoming Spanish Honor Society secretary Crystal Mehdizadeh said.

According to Jones, she will miss the classroom interaction with her students the most when she retires.

“That has always been the best part of the job,” Jones said.  “Not the homework, not even the things you do with your colleagues, that’s what I’ve always enjoyed the most, and that’s what I will miss.”

While this is the end of her teaching career, Jones plans to continue working in some capacity post-retirement.

“I don’t have a specific plan at the moment, but I’m also not a stay-at-home-person,” Jones said.  “So I will definitely be working to supplement my income.  I’m open to suggestions.”

After 11 years, AP NSL and U.S. History teacher Matthew Schilling will be leaving CHS at the end of this school year.

Schilling will be moving Salt Lake City, Utah where he will teach government, psychology and geography at Alta High School.

“When I was talking to my wife about applying to schools, I realized that I would never find one like Churchill,” Schilling said. “One of the best things that I have experienced here is the dedication and ability of the students.”

Schilling has a reputation for engaging his students in order to create a more comfortable learning environment that students remember and appreciate long down the road.

“My favorite aspect was the balance between entertainment and education,” junior Annie Fang said.  “Mr. Schilling taught NSL in a distinct way that made it fun but simultaneously enlightening. Not only did he know the curriculum like the back of his hand, but he also went out of his way to ensure that every single student really understood the material.”

Though Schilling will be missed by students and teachers alike, the AP NSL community will suffer the most from his departure.

“Mr. Schilling has really developed the AP NSL program into something upcoming sophomores are excited to take,” AP NSL and Asian Studies teacher Lallitha John said. “He has a tremendous amount of knowledge and loves to teach this age group, and is very passionate about both. It’s hard to lose someone who has the same vision, as a colleague and friend.”

After dedicating 14 years of his life to teaching at CHS, Jeffrey Wolf will be retiring this June.

“If you’re going to work at a high school, you might as well work at Churchill,” Wolf said. “When September rolls around, I won’t be waking up early or writing lesson plans anymore, and I’m not sure how that’ll feel. Right now I’m doing everything for the last time.”

According to Wolf, he enjoyed working in the Bridge program with students who were more challenging to teach because of the students’ various needs.

“I relate to their challenges and struggles, so I’m able to help them maximize their abilities,” Wolf said.

Aside from working in an academic department, Wolf discovered his appreciation for theater productions shortly after he began teaching at CHS.

“It’s amazing watching the transition of a production as it goes from getting the script, to collecting the props, and to seeing the actual performance,” Wolf said. “Working backstage gave me a chance to work with the general population of students beyond my usual small group of students.”

According to Wolf, some of his former students have contacted him after they graduate and told him how much he has influenced them even after high school.

“The best part of being a teacher is having former students,” Wolf said. “It’s hearing about what they’ve accomplished and knowing you must’ve done something right.”

After retirement, Wolf plans on taking it easy. He looks forward to resting, traveling and volunteering at Black Rock Theater in Germantown, and he hopes to keep in touch with the students he taught.

“I like him mostly because he’s strict,” junior Max Sandler said. “It’s an odd thing to say because most students don’t like that about a teacher, but he reinforced the rules and kept things intact. I’ve learned to love him over the years, and I’ll never forget him.”