ACT test to be offered online starting in 2015 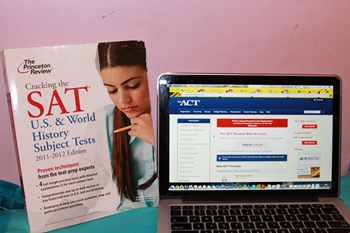 Beginning in 2015, the ACT will be offered through a computer-based program in states that offer the ACT on a school day to fulfill the requirements of their district, state or school assessment programs.

Students will be able to take the online version of the ACT on tablets, computers or laptops.

“I think it will be cool to have it online because people will finish it faster,” senior Kiana Givpoor said.  “I feel like a lot of people are faster on the computer.”

According to a May 2013 U.S. News article, the standard pencil-and-paper version of the ACT will eventually become entirely digital.

According to sophomore Rachel Rosenberg, although she prefers to take written tests as opposed to online tests, she feels the online administration of the ACT will lessen the amount of paper that is used unnecessarily.

In addition to administering the tests online, College Board will be offering online practice tests, which could impact the way many students prepare for the ACT.

“Teens are completely used to being online and in front of a computer screen,” ACT tutor Paula Titus Laboy said.  “The ACT is such a fast-paced test that doing it on a computer could save students time and let them complete more of the test thoroughly.”

According to ACT tutor Jordan Abramson, having the ACT become digital could appeal to many students.

“Allowing the students to know their scores upon completion of the test is a big selling point,” Abramson said.

However, some CHS students believe that the online administration will hinder students’ scores.

“I personally prefer to write directly on my test,” senior Kristen Fulchiero said. “It helps me focus better, and I feel that it will affect students who test like me.”

As of now, the SAT has not announced the transition to online testing.  However, that is subject to change due to the Common Core curriculum as well as the ACT moving to online administration.

“It is going to be a major change in the college testing process,” Fulchiero said.