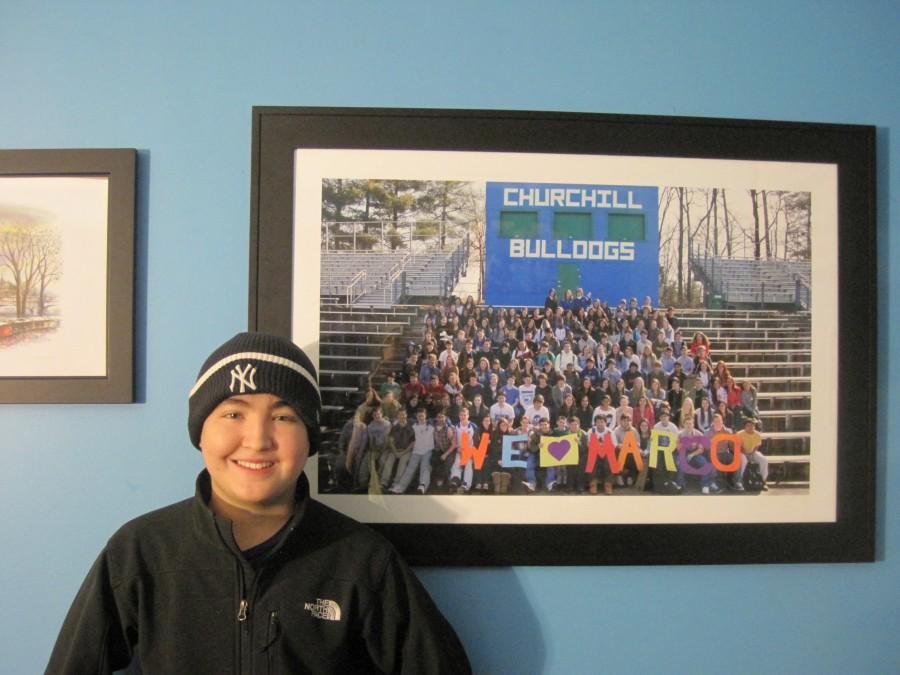 The CHS community has been supporting freshman Marco Gutierrez after he was diagnosed with Acute Lymphoblastic Leukemia in January.

Marco has remained hopeful throughout the entire experience. His positive attitude paid off when he received the news from his doctor March 2 that he is 100 percent cancer free, though he will still undergo chemotherapy for the next eight months.

“It feels so good to know that I am cancer free,” Marco said. “It’s a huge worry just lifted off my shoulders, and it’s amazing to know that all the medicine so far has reacted so well.”

To support Marco, freshman Nick Muscarella came up with an idea to take a picture of the entire school on the bleachers holding up a sign saying “We love Marco.”

“I don’t know his relationships with everyone so I figured that even if you didn’t know him that well, you could still show support for him,” Muscarella said.

The Class of 2015 is also supporting Marco by selling bracelets that say “Crush Cancer.” All the proceeds will go to the oncology ward at Children’s Hospital in DC.

“My officers came up with the idea that they wanted to support him,” freshman class sponsor Christin Nixon said. “We asked him if he wanted a gift and he said he’d prefer we fundraise for the Children’s Hospital.”

Marco has also received many Facebook messages and texts from friends and strangers wishing him the best and letting him know they are thinking about him.

“At first it was surprising to see how many kids were reaching out to me,” Marco said. “It’s a really good feeling having the entire school supporting you.”