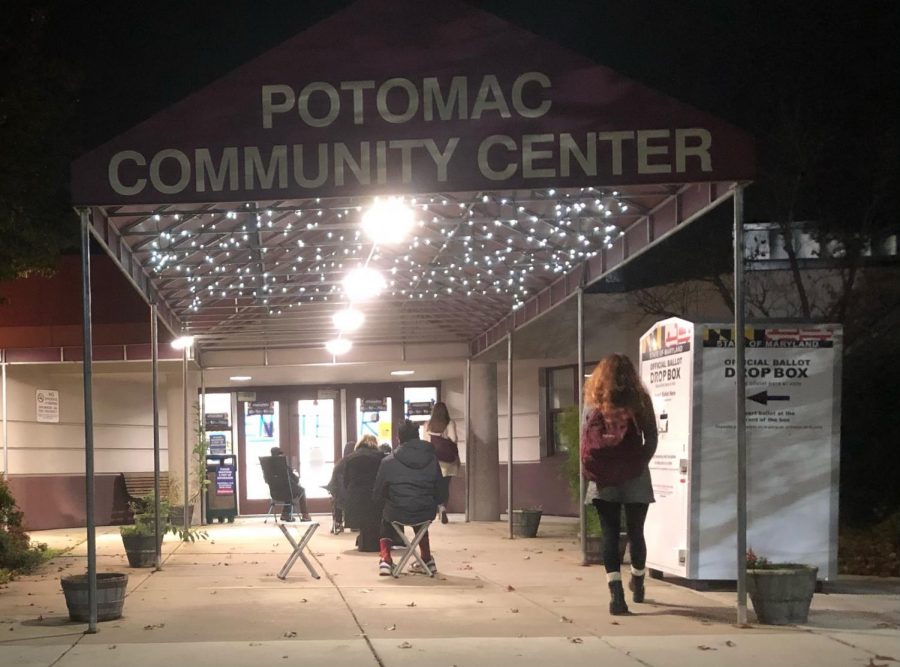 Junior Bridget Kelly (right) walks into the Potomac Community Center on Oct. 28 for her assignment as a poll worker. Kelly's shift runs from 6 am until 11 pm and consists of setting up the precinct, checking voters in and helping them vote.

As Nov. 3 gets closer, it’s not a surprise that this year has provided more challenges than past presidential election years. Election workers, a key but often undervalued group on Election Day, has also seen changes.

Junior Ryan Holms has volunteered to be an election worker this year. Student poll workers can choose to receive up to $310 or 25 Student Service Learning hours for their time.

To apply on the Board of Elections website, volunteers had to be above the age of 16 before Oct. 13, U.S. citizens and registered voters. Those under 18 had to fill out a permission form with a parent signature. Once accepted, applicants were required to complete a four-hour training course on polling sites and communication, and another three-hour course about technology and checking in voters.

“It is important for people to volunteer at the polls because it helps along the democratic voting process,” Holms said. “Especially in 2020, due to COVID-19, there has been a shortage of election workers, which means more people need to make sure this election runs smoothly.”

Since a majority of poll workers are senior citizens, there has been a nationwide shortage of critical volunteers. However, many older teenagers are filling in to do their part in helping their community. As of September 2020, over 400,000 people had signed up on Power the Polls, a coalition to recruit healthy low-risk workers to keep polling precincts open.

“Because most of these people don’t feel comfortable and safe working, it’s super important young people are stepping up to aid the democratic process,” junior Bridget Kelly said.

Kelly’s assignment this year is at the Potomac Community Center. She will be working from 6 a.m. to 11 p.m. for four days. Three of these days will be during early voting, Oct. 28, Oct. 30 and Nov. 1, and one will be on Election Day, Nov. 3.

“The hours are long and some of the work is a little difficult, but I really don’t mind since I’m doing something good for my community,” Kelly said. “I also get paid, so that’s a bonus.”

Working at the polls is not the only way students have been getting involved. Elizabeth Qiu, a junior and vice president of the nonpartisan Women in Politics club at WCHS, has been phone banking with State Delegate Lily Qi.

“This is the first time it is mail-in ballots, [and] all of that because of COVID-19, so we are reaching out and calling as many senior citizens as we can in this area to help them vote and make sure they know the steps needed to vote.” Qiu said. “There are a lot of changes this year and although many seniors may be very politically active, they may not be informed of all of these rules.”

Qiu and the other phone banking volunteers use Open VCB, an online phone banking database to call people and mark if the person responded. Volunteers also receive SSL hours for each hour they spend making calls.

“Phone banking is especially important this year because there are so many steps with mail-in ballots and we need to make sure the votes are counted,” Qiu said.

According to the Maryland State Board of Elections website, nearly 35,000 mail-in ballots were rejected in the June primary elections; 87% of which were due to late mailing and the other 13% was because of incorrect completion. However, through phone banking and working at the polls, WCHS students are helping to ensure every vote counts.

“This election cycle is different because it is expected to be one of the most consequential elections in our history,” Holms said. “The political divide has become huge in the past four years and it is crucial that we continue to promote democracy in the form of voting and volunteering, regardless of political affiliation.”