Newseum leaves more than a black and white legacy 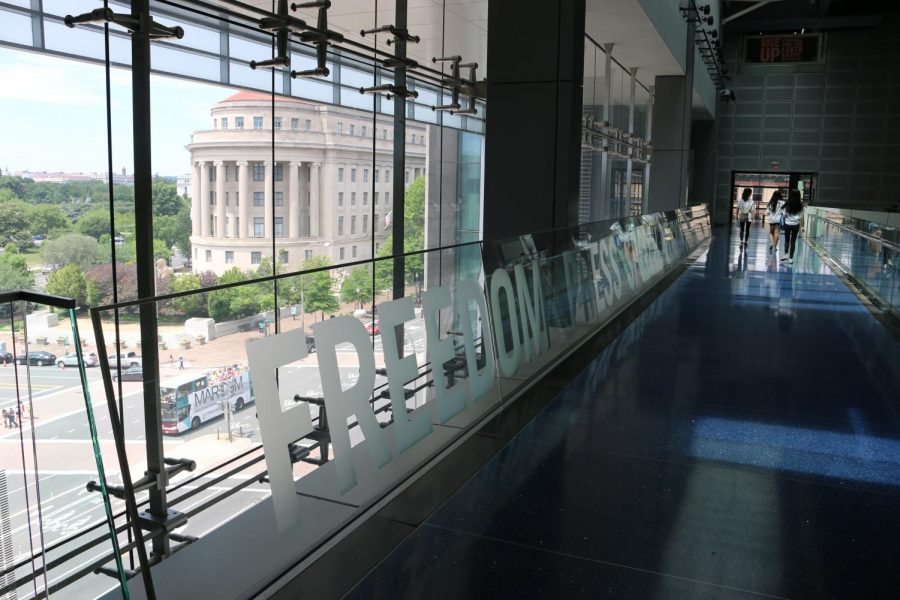 The Newseum may no longer exist, but its spirit and dedication to exceptional journalism has inspired generations of Americans to value the freedom of speech, expression and press.

After 11 years and 10 million visitors, the Newseum closed Dec. 31, 2019, due to unsustainable operating costs and was sold to Johns Hopkins University. First opened by the Freedom Forum in 1997, the Newseum was a well known museum that strived to teach visitors the role of free press through a multitude of fascinating exhibits.

On the outside, the Newseum is strikingly magnificent with its 75-foot tall tablet of marble inscribed with the 45 words of the First Amendment. Right under this holds a display of today’s front pages of newspapers around the world.

Some of the most prominent exhibits in the museum are the 9/11 Gallery, Journalist’s Memorial, Pulitzer Prize Winning Photographs and Inside Today’s FBI.

This exhibit sponsored by Comcast recounts the tragic terrorist attacks on Sep. 11, 2001 in New York City. The exhibit mainly features the perspective of journalists who risked their lives to report on the chaotic scene. Perhaps the most prominent object in the gallery is the broadcast antenna mast from the North Tower, which is fixated in the middle of the exhibit.

Right behind the mast is a wall filled with the 127 front pages from newspapers around the world that covered the devastating attacks. On the side, there is also a screen with a video tribute to Bill Biggart, one of the journalists that risked their lives to get photographs, as well as his camera in a glass case next to it. The gallery evokes a feeling of both sorrow and patriotism as visitors walk through the exhibit featuring the terrible act of terrorism.

The Journalist’s Memorial serves to honor 2,344 of the countless reporters, broadcasters and photographers who lost their lives for reporting. Serving as a constant representation of the danger that comes with telling the truth, this exhibit reminds people that the information they get so easily every day often comes at a cost. Annually, this memorial is rededicated to add journalists who had been killed the previous year. This memorial is somber and heavy and allows visitors to gain respect for journalists around the world.

Walking into this exhibit, visitors are presented with rows of Pulitzer Prize-winning photographs, dating all the way back to 1942. The exhibit also honors journalists who took the photos in such dangerous and heartbreaking conditions. Many of the photographs bring terrible situations happening in other countries to the public eye. Only two prizes are given each year, so the photographs in the exhibit are of the most influential and evoke emotions of empathy, joy and sadness. As Eddie Adams, winner of the 1969 Pulitzer Prize for Spot News Photography said, “if it makes you laugh, if it makes you cry, if it rips out your heart, that’s a good picture.”

One of the Newseum’s most popular exhibits, the FBI exhibit, showcases some of the artifacts from terrible terrorism tragedies and explains how the FBI works to fight crime. This exhibit shows how crime-fighting has evolved post 9/11 and consists of artifacts encased in glass boxes. Some of the most notable tragedies showcased in the exhibit are 9/11, the Boston Marathon and the “shoe bomber,” Richard Reid. There were real artifacts from these crimes, such as the passport of the terrorists in the 9/11 attack and the belts used to hold down Richard Reid when he tried to bomb the American Airlines flight. After touring this exhibit, visitors who do not enjoy learning about crimes may feel a bit intimidated by the spine-chilling tragedies, however, others may find the displays intriguing.

All of these exhibits commemorate important aspects of the American identity, including the freedom of speech and of the press. The Newseum may no longer exist, but its spirit will endure, carried on by the students and educators who have seen it, journalists who risk their own lives and the First Amendment, which has allowed generations of Americans to advocate for and create a better world.