Students to be excused from school for protests 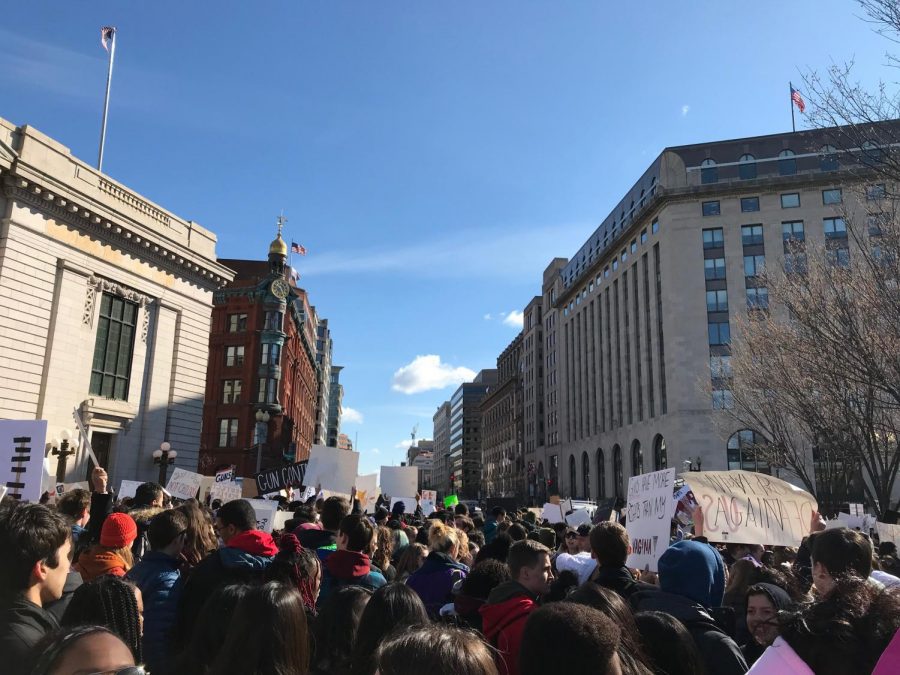 Large amounts of students line the streets in protest for gun control.

As of Dec. 5, MCPS is planning to pass a proposal which would allow students to skip classes to attend political protests.

The MCPS Board of Education is expected to pass the proposal as early as Jan. If this proposal gets passed, MCPS will be one of very few school districts in the country that allows up to three excused absences for students to take part in political protests.

“I think this proposal is great,” senior and student activist Dani Miller said. “It is really good to encourage MCPS students to be politically active and channel their energy into positive change, which is exactly what MCPS is doing.”

One recent protest, a countywide walkout that took place March 14, garnered attendance by many MCPS students, resulting in the countwide Board of Education proposing this new excused absence policy.
This walkout preceded a protest at the Capitol hosted by March for Our Lives March 24, with about 800,000 students in attendance.

According to a March 24 USA Today article, if the amount of students that attended the protest is correct, the event would be the largest single-day protest in the history of the nation’s capital.
Although some may believe that allowing students to skip classes to take part in political protests takes away from crucial learning, others believe that it is important for students to voice their opinions as they are the next generation of citizens in this country.

“I attended the March for Our Lives protest,” sophomore Kelly Yu said. “Being able to support a cause that is extremely important to me was worth the unexcused absence.”

If the proposal passes, students going to political protests will have to receive parental consent, but will not have to have their participation in these protests be approved by principals, nor will it be necessary to get permission from the organizations sponsoring these events.

According to a Nov. 23 Washington Post article, the goal of the proposal is to ensure that students and employees are well informed and guided in their activities regarding their participation in civic engagement activities, political campaigns, partisan election activities and distribution of political or partisan materials.

Allowing MCPS students to take part in these protests will encourage and increase the amount of participation at these events because there will be no consequences regarding attendance or school work, since teachers do not have the ability to deny credit for missed assignments or assessments if an absence is excused.

“Protests and walkouts are seen as breaking the rule, and something dedicated students should not participate in,” Miller said. “Excusing this act, the same as MCPS would with a sick day, further validates civil engagement as a reason to miss school and as means of learning outside the classroom, which will make protests seem like a more viable option for students.”