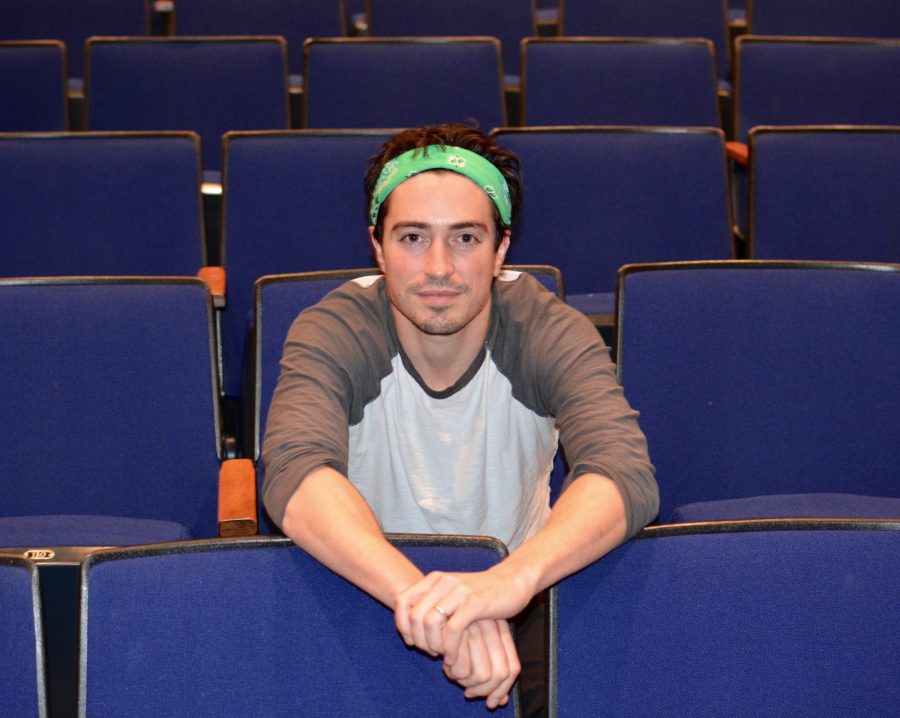 Feldman in the CHS auditorium during the interview.

By Thomas Atkinson and Sarah O'Brien

CHS alumnus Ben Feldman is a television and film actor in such shows as Mad Men, Silicon Valley and Cloverfield. Though he has done endless interviews, the Observer had the privilege of interviewing Feldman recently.
Feldman jogged to CHS from his father’s house in the Inverness neighborhood of Potomac for the interview. His bubbly attitude exuded and as a result, the interview felt as though we were talking to an old friend rather than an actor who has appeared on Broadway.
Because Feldman was eager to see where he started in the spotlight, we conducted the interview in the auditorium in order to bring back the memories of his teen years. As a performer in Blast, One Acts, several plays and even a brief stint as a soccer player, Feldman was active in the CHS community.
“Everything looks different,” Feldman said of CHS. “Money has been put everywhere except for the auditorium.”
Feldman asked about changes to Blast and how the shows have been in recent years. He explained to us how, back in his day, the show would feature skits in between numbers and would have student hosts.
“We did little skits in between songs,” Feldman said. “My buddy Randell and I started writing stuff for it, and it became these long monologues and told stories about the ‘50s and ‘60s and jokes.”
Although he may not have been certain about becoming an actor, Feldman knew he would pursue some career in the arts.
“When I was a little kid I was obsessed with dead rock stars and painting,” Feldman said. “I thought I would be some type of visual artist.”
Feldman had some doubts about his future in acting when he nearly did not get a part in the CHS student-acted-and-directed skit show One Acts.
“The theater teacher would not cast me,” Feldman said. ”When I was a freshman and sophomore, I auditioned and auditioned and auditioned, and never got anything except for like background, background, background. One Acts came around and I remember being like ‘I’m going to bail on this acting thing if I don’t get something.’ There’s like a million parts, and children are casting them. If I don’t get into one of those, I’m saying ‘Forget it, I’m done with acting.’ Everyone else was the main character and then I was the weird one that came in for like a second. And then from there, I started doing slightly bigger parts in musicals or plays and then Blast.”
Although the CHS theater department may wish that they could have been the first person to introduce acting to Feldman, he actually started at a local summer camp. “I was maybe like 7 and obnoxious and this counselor was like, ‘This kid is loud and obnoxious, do you want to do that in front of an audience?’ And so I was Rooster in Annie. From then on I was always doing that stuff,” Feldman said.
Feldman attended Ithaca College in New York and pursued a major in the arts.
“I loved it there,” Feldman said. “Their theater department is fantastic. I go back and speak there all the time. I love those kids.”
While in his senior year of college, Feldman auditioned for The Graduate on Broadway and made it all the way to being one of the final two picks. He lost the role to How I Met Your Mother’s Josh Radnor, but ended up becoming his understudy.
From there, Feldman continued his passion and went on to star in different TV shows and movies.
He came back to Gaithersburg, MD in 2013 to marry Maryland native Michelle Mulitz, who went to Carnegie Mellon to also pursue acting, but later decided to pursue interior design and architecture. He now lives in Los Angeles with Mulitz.
While some of the work may be tedious, he still enjoys his profession to this day.
“I like make-believe; I like pretending to be other things,” Feldman said.” You get to live a lot of lives when you are an actor.”