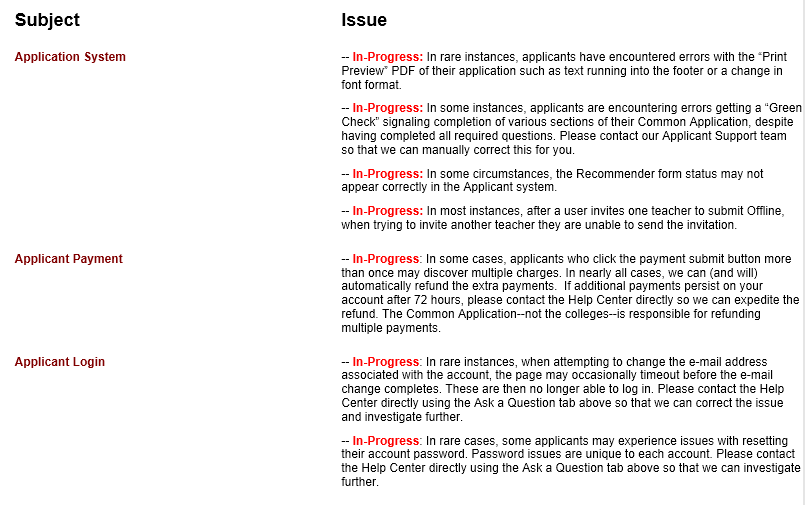 The government may not be the only thing shut down—the new version of the online Common Application, a college application website often referred to as the Common App, has been experiencing many glitches and crashed Oct. 14. Only days before many schools’ Early Action and Early Decision deadlines, issues with the Common App are causing much anxiety and panic for already-stressed seniors.

The Common App, which is accepted by over 500 colleges and universities in the country, allows students to fill out on application that can be used by multiple schools. Over the summer, upgrades to their system were implemented. The upgrade was intended to make the Common App easier to use; however, students and teachers have experienced many problems with the new system.

“It has been a very difficult few weeks for students, parents, educators and colleges,” College/Career Information Coordinator Luana Zimmerman said. “In prior years, it was an efficient, cost-effective vehicle for both colleges and students.”

Issues with the new system include delays in teachers being able to submit recommendations and transmit transcripts electronically and trouble for students with pasting their essays in the space allotted. Colleges have also had difficulties with downloading students’ applications and other documents.

According to senior Maddie Krueger, she has had trouble with her payment not going through and recommenders not being able to send in recommendations.

These problems have caused many seniors filling out college applications to be even more worried and anxious than usual.

“It’s been really stressful because I’ve been worrying about whether or not I’ll be able to get all my applications in on time, but, luckily, colleges are recognizing these problems.” Krueger said.

Several universities and colleges, including University of North Carolina at Chapel Hill and Georgia Institute of Technology, have extended their Early Action deadline until Oct. 21 to give students extra time they may need to submit applications due to the difficulties with the Common Application.

According to the Common App website, all of the known issues are listed as in progress.