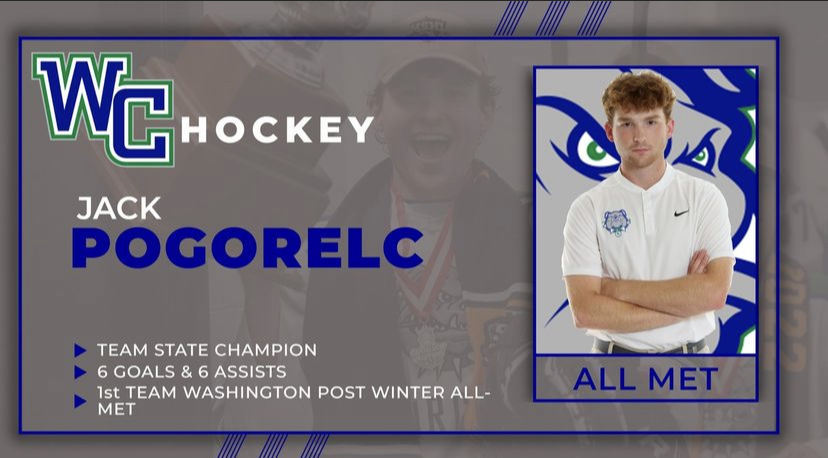 With 13 All-Met selctions, WCHS athletics reaped the success of their athletes. To go along with several state championships, many of WCHS's All-Met athletes have recieved college attention.

Even though winter sports have come to an end, the awards continue to pour in for athletes. The Washington Post released their annual Winter All-Met awards, highlighting the top athletes in the Metropolitan area. 13 WCHS athletes and one coach received an award in this year’s edition.

Ethan Nasvaderaini was literally and figuratively unbeatable in his 2021-22 campaign. Nasvaderaini dominated the 120 pound weight class, posting a 42-0 record and cruising to an individual state championship. He also eclipsed 100 wins in his final match, making him the only active member of the team to do so.

Dominating in one sport was not enough for Jack Pogorelec as he captained Churchill to its sixth-straight Maryland Student Hockey League title. Pogorelec tallied 20 points in 15 games and was among the top 65 skaters in that category. While golf is the sport Jack will be pursuing at Boston College next year, his storied WCHS hockey career will be well-remembered.

Despite being only a sophomore, Brady Begin found himself atop the ranks of the state champion WCHS swim team. Begin won the individual state championship in the 500 Freestyle with a time of 4:33.44. He also finished second in the 500 Freestyle during the Metro Championships where WCHS shocked the state by beating top private school programs. Already ranked seventh in the state according to Swimcloud.com, Begin has a bright future ahead, and hopefully more awards to add to his collection.

Jaden Selby’s athleticism is projected not only on the football field, where he won Montgomery County Offensive Player of the Year, but also on the mat where he became a state champion. With a 39-1 record, Selby fought through a tough 170 pound weight class to a title win and national recognition.

Georgia Yang is the epitome of a versatile swimmer, excelling in multiple strokes. Yang captured the 100 Butterfly individual state championship with a time of 55.46. She also finished third in the 200 Freestyle, proving she is one of Maryland’s best in the sport. Having just committed to the Naval Acedemy, Yang has her sights on capturing both of the titles as well as repeating as team state champions.

It was very easy to tell when Tre Stott was on the basketball court. His electrifying dunks and spot-up shooting, made him a player to fear on an already loaded roster. Transfering in for his junior season, Stott made an immediate impact by scoring an average of 16 points, five rebounds and two assists per game. After falling just short in the state championship game, Stott will spearhead a 2022-23 WCHS basketball team to look out for.

In all, this winter was a massive success for WCHS athletics and its athletes. With over half of the All-Met recipients returning for at least another year, WCHS athletic dominance is here to stay.