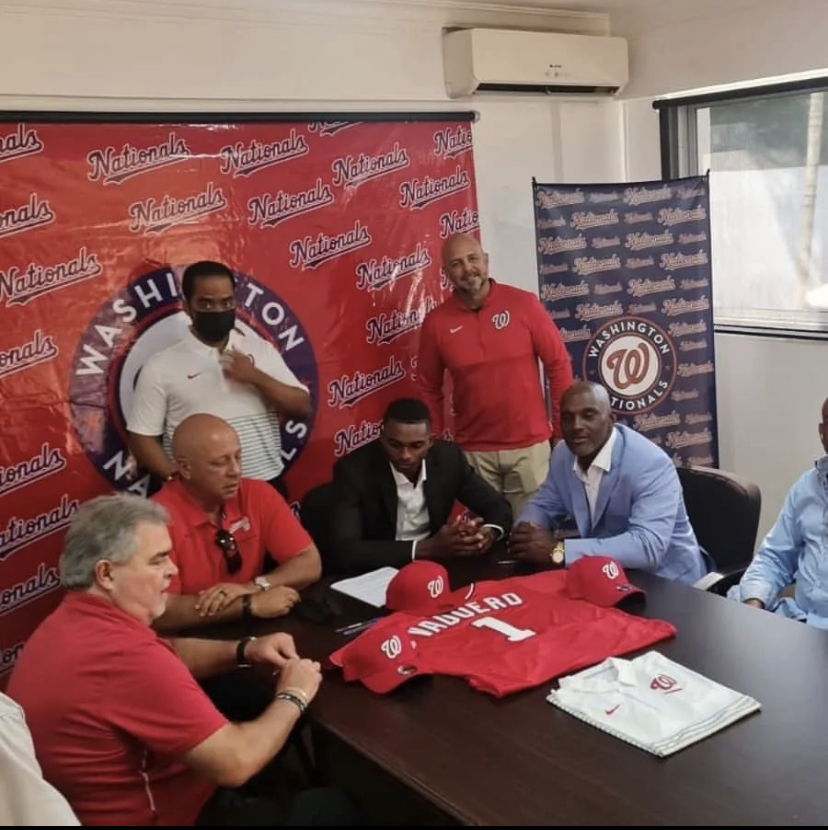 Cristian Vaquero, pictured signing with the Washington Nationals, is one of many international prospects who sign with professional baseball teams.

According to CBS Sports, 30 percent of current Major League Baseball (MLB) players were originally signed as international free agents. Although WCHS baseball fans recognize names along the likes of Ronald Acuña, Vladimir Guerrero Jr., Fernando Tatis Jr., and Juan Soto, many don’t know how these players got to where they are today.

“It is one of the most exciting times for me during the MLB offseason,” WCHS junior Eric Chen said. “I love seeing who my team picks up and watching them develop into superstars.”

Because of the COVID-19 pandemic, the period where teams could sign players changed significantly. The window opened on Jan. 15 and closes on the 15 of Dec., whereas it normally goes from July 2 to June 15.

Although teams have eleven months out of the year to sign international prospects, the top ones are signed immediately. This is because teams pay scouts to travel to different regions of the world to find and evaluate the best players. This way, they already know which players they want to sign.

Teams also have to take into account the allocated bonus pool – the allotted money they are allowed to sign international prospects. The bonus pool is determined by the size of a team’s market. A larger market team such as the New York Yankees would have a smaller bonus pool than a smaller market team like the Baltimore Orioles. The aim of this is to give smaller market teams a higher chance at signing better players in hopes that they can improve the team.

“I like how they do it because it gives teams with a smaller fan base and less popularity the opportunity to get really good players,” Chen said. “These better players would give the smaller team more fame.”

The Major League Baseball Players Association (MLBPA) is looking to convert the International Signing Period into a draft, much like the one that features American born players. Larger market teams are not in favor of this as they would not be able to outbid smaller market teams for top prospects.

“I do not like the idea of an international draft at all,” Chen said. “I think it makes things too complicated eligibility wise and it doesn’t reward the scouts who find the “diamond in the rough” of prospects.”

Roderick Arias, a shortstop from the Dominican Republic, signed with the New York Yankees on a four million dollar contract. He was the number one ranked international prospect according to MLB.com and has received a lot of deserved hype.

“Being a Yankees fan, I was so excited when I learned that Arias signed with us,” Chen said. “He’s fast, can hit on an elite level, and I am very excited to keep track of his progress. ”

Another prospect to follow is Cuban shortstop Alexis Hernandez, who ranks No. 18 on MLB.com’s Top 50 International Prospects list. Hernandez has potential to be a five-tool player and a major contributor to the Chicago Cubs in the near future.

“I’m pumped to have Hernandez in the Cubs organization,” WCHS junior Alec Lehtman said. “He is a really great player based off of the videos I have seen and he should turn into a star.”

The other end of the beltway also got a future star in Braylin Tavera, from the Dominican Republic. The Baltimore Orioles got themselves a player who has 40 home run potential as well as a solid arm from the outfield. His pitch recognition has been compared to Juan Soto’s – high praise.

“I think this year’s prospect signings were a massive success,” WCHS junior Isaac Horn said. “We got Tavera who is an absolute beast at the plate and has insane potential.”

The Washington Nationals landed Cristhian Vaquero, an outfielder from Cuba on a 4.5 million dollar deal. It took most of the Nationals bonus pool, but they were able to secure the number two overall international prospect.

Lots of WCHS students are Washington National fans so this signing is very appealing to them. Washington is getting a switch-hitter with tons of power, as well as an incomprehensible knowledge of the game.

“It is so crazy how much money is being poured into the international players,” Chen said. “It is awesome though, it gives young kids across the globe hope that they can play in the best baseball league in the world.”