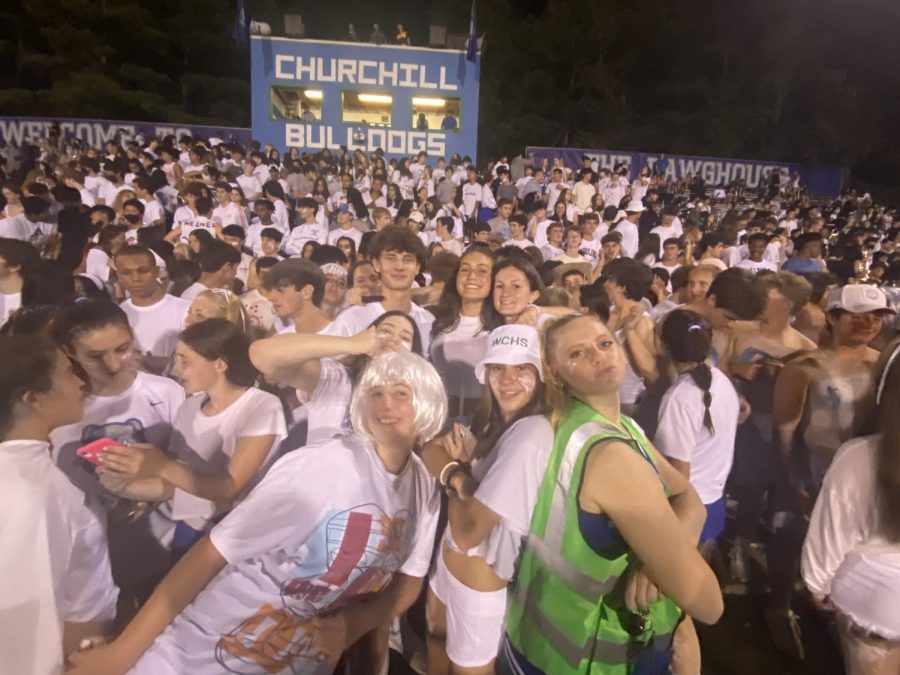 Seniors spirited in the white out theme pose at the bottom of the student section. The hype and fun of games have helped to bring out bigger crowds and fill the bleachers.

Every single WCHS varsity sport has a winning record. WCHS has long been known for solid academics, but it is not normally considered a “sports” or “spirited” school. While the wins may be due to great plays, hard work and a longing for games after a year without them, there is one more thing that all the teams and their winning ways have in common: WCHS’s new student spirit section, K-9, rooting for them.

K-9 is a student-founded and run group that serves as a unified “student section” for WCHS who brings the energy to games. Originally, the idea was to be called “paw-patrol.” However, that was deemed not intimidating and ferocious enough, so co-founder and WCHS senior Christina Blessing came up with the name ‘K-9’ which alludes to the synonym for dog, canine. At first, ‘K-9’ referred to only the senior leaders of the group, but it has been adapted to refer to the spirited student section, instagram account, and mentality as a whole.

The group was founded by seniors Jamie Marks, Courtney Cormier, Alyssa Sofat, Hannah Stefan, Christina Blessing and Irene Haramis. They all are in leadership class together and wanted to help bring excitement to sports games, even more than in previous years. While K-9 was created to root for WCHS teams by WCHS students, the group is not affiliated with the school or SGA.

“Churchill has always been known for having little school spirit and we wanted to change that,” WCHS senior and K-9 founder Irene Haramis said. “Being virtual all of last year we wanted to make sure all the students (especially seniors) had fun at the sporting games that are now occurring.”

With little school bonding and no events able to happen last year, it was an experience that people missed. K-9 is trying to make student’s high school moments even better than they previously were.

“At the first football game of the season, the seniors were at the bottom of the student section bleachers and were decked out in all blue (the theme for the first game)” WCHS junior Isabella Zoll said. “They really brought a ton of energy and cheering to the game and made sure everyone was standing the entire time. It was the most spirited and fun football game I had ever been to.”

K-9 modeled their idea of a spirit section after other local student sections and Instagram accounts such as the Quince Orchard Red Army and Walter Johnson’s Mighty Mad Cows. K-9 has their own Instagram account @churchillk9. On the days leading up to the football games, they remind people of the themes and post pictures after games. They also post reminders about other game days so that people are informed to support other teams.

“Although Friday night football games get the most attendance, K-9 supports all teams throughout all seasons,” Haramis said. “We promote going to all of the games, and so far it has been successful in getting a crowd for a variety of sports.”

School spirit does not just happen on its own,  K-9 puts a lot of time and effort into the preparation for attending each game.

“Every Thursday, the girls on K-9 go together to Party City, Michael’s and Five Below to pick up posters and sheets for the game,” WCHS senior and K-9 founder Christina Blessing said. “We then have a meal where we order food in and make all of our props.”

During the games they use cow bells, silly string, and come up with chants to get people fired up. The added energy to games has positively transformed the experience of fans and started a new sports culture at WCHS, while also creating traditions and memories that will live on forever.

“Anyone can be a member of K-9 and our focus is to showcase all students at games so everyone has a chance to be featured on the account,” Blessing said.

After school being virtual for a year, this is the perfect time for an addition to the WCHS community. So, come out to the last home game this Friday night, Oct. 22, dressed in Hawaiian to root for the bulldogs alongside K-9!