Athlete of the Month: Andrew Xue 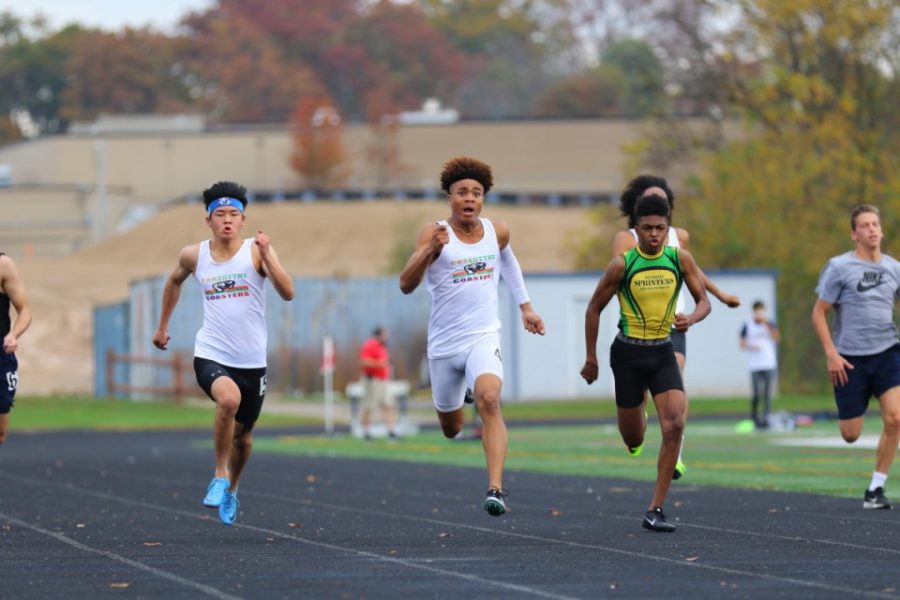 Andrew Xue (far left) races in the 100 meter event at the Urbana Track Series Meet, head-to-head with fellow WCHS runner Langston Major. Xue finished second overall in the event. With no MCPS indoor track season, Xue took it upon himself to run at club track meets for the Corentyne Coasters.

It has always been the same grind. With his spikes shredding into the track, wind blowing through his hair, the only thing different for Andrew Xue is the mask on his face. Even with the world around him in shambles, life on the track stays the same. Now a senior on the WCHS varsity track team, Xue began his storied career two years ago.

“I’ve been running since the spring of sophomore year and have been persistent in my training ever since,” Xue said.

Xue has always played sports outside of school, as he is heavily involved with club basketball. However, eager to find a way to stay active after school during the basketball offseason, he decided to get involved in WCHS sports. In the spring of his sophomore year, Xue tried out for the outdoor track team, making the team with promising times.

“At first, track was just something I picked up so I could do something after school and interact with my friends,” Xue said.

Since the moment Xue became a WCHS sprinter, reading his name on the email listing the new 2018-2019 track team, he has put his heart and soul into the sport. Every practice is treated the same, with great intensity and energy put into every single exercise.

Same animal, different beast, is a phrase that perfectly encapsulates Xue’s mental fortitude when it comes to perfecting his craft. Though most athletes work hard, Xue goes above and beyond. Every workout is meticulous, designed and executed down to the smallest details. Whether he is working on his start or his strides, practice is almost like a puzzle, with Xue putting together each piece through grueling repetition.

“I always want to fulfill my potential in everything I do, so knowing that I still have room to improve pushes me through every practice,” Xue said.

Over the summer of his junior year, Xue went to the track nearly every day, ensuring that his technique stayed sharp. His work ethic has allowed him to reach new levels of greatness, cutting down his times in two key races, the 100 meter and 200 meter dash, by around two seconds.

“My [personal records] in the 100 and 200 are 11.74 [seconds] and 24.13 [seconds] respectively, which I ran pretty recently at a club meet a few weeks ago,” Xue said. “At the club meet, they held the proper CDC COVID-19 precautions to make sure the meet was safe for all runners and spectators.”

His consistent improvement has impressed coaches and teammates, showing them the type of athlete Xue strives to be.

“I do not remember a single practice where [Andrew] let up, he always ran as hard as he could during workouts,” Jeffrey Yee, a former track teammate, said. “Every exercise is 100%.”

When he is not on the track, one can usually find Xue at the gym. He maintains an intensive workout regiment at OneLife, his local gym, supplementing his technique with some off-track strength training. While it is never good for a track star to get too bulky, Xue has been gaining muscle and strengthening key parts of his body in order to help him get an extra boost during races. Xue even takes extra care of his diet, ensuring his body is always healthy and strong.

On the top of the list of Xue’s essentials is music. He rarely goes anywhere without his earbuds, constantly hyping himself up with his workout playlist while he works out or before his races. When he runs, it becomes his lifeline, the rhythm of the music keeping him grounded. To most athletes, listening to music is just a distraction, but this routine carries significant importance to Xue.

“Running without music is something I do not really think about because I feel like I have already integrated music into every one of my practices. It really helps me keep pushing, especially at the end of the workouts when I am not feeling the best,” Xue said. “The beats in my head allow me to finish [workouts].”

Though he has had his share of great success, even greatness comes at a certain price. Since his first season, Xue has faced countless injuries that have hampered his time on the track. During his storied career, he has seen everything from shin splints to major injuries, each one sidelining him from the sport he loves. Even with improvements each year, the road to success has not been an easy one. Although, Xue has used these complications to motivate him, keeping him focused on his ambitious goals.

“I’ve battled through my fair shares of setbacks and knowing that I could’ve stopped at any point really motivates me to keep going,” Xue said.

This past summer, Xue underwent surgery to fix an injury. He was sidelined for weeks, barely able to walk in the days after his surgery. Just weeks later, he was running on the track, already returning to the grind. Since his speedy comeback, Xue has been training for an MPSSAA season that remains up in the air. Even through the uncertainty of COVID-19, Xue remains unfazed, continuing to compete at high levels with his club track team the Corentyne Coasters.

“I have been training ever since my junior year was cancelled due to COVID and I am just staying prepared in case we do end up having the indoor and outdoor seasons like MPSSAA has stated,” Xue said. “I have been training with my club team and participating at club meets outside of MCPS.”

When the pandemic struck and quarantine began, no one had any idea surrounding the massive implications COVID-19 would have on the world. Following an excellent indoor track season, Xue was blindsided when the news that his junior year outdoor track campaign was to be cancelled, which was very disappointing news to an athlete who had worked so hard.

“Hearing that the spring season was cancelled due to COVID was really heartbreaking for me because the team and I had really high expectations going into it,” Xue said. “I really feel like we had something special brewing and the cancellation put a stop to it all.”

Even if Xue’s track career is cut short once again, he has already left his mark on the WCHS track community. His perseverance and strength is the stuff of legends, an inspiring testament to his love for running. Graduation will not mark the end for Xue, as he plans to continue running in college, bringing that same Bulldog intensity with him wherever he decides to compete.

“I do plan to run after high school if possible,” Xue said. “I want to make sure I am happy where I go, but being able to run would be an added bonus.”