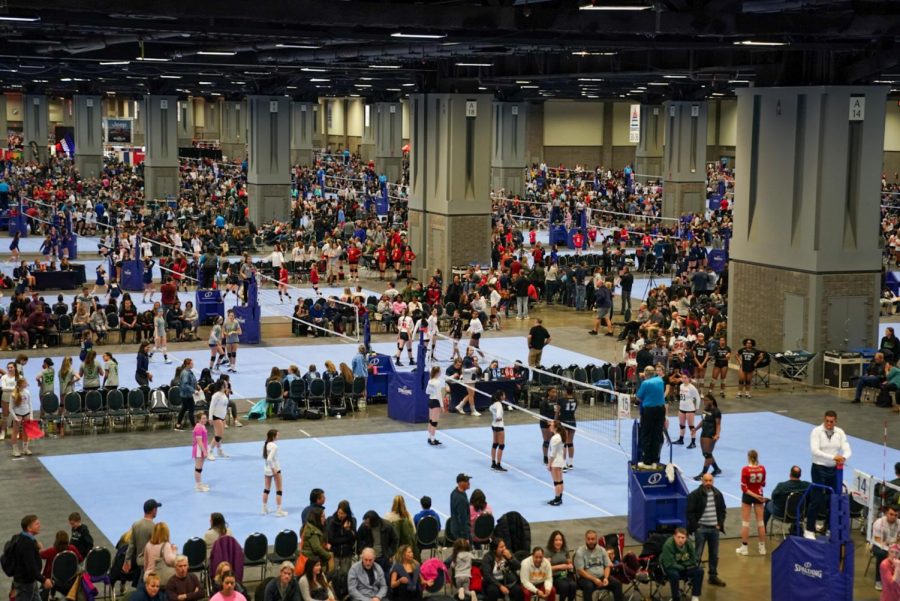 Athletes prepare for an exciting tournament in the Walter E. Washington Convention Center for the Capitol Hill Volleyball Classic. Players from all over the country and even athletes from Canada, Holland, China and Puerto Rico have come to participate in one of the most exciting and unforgettable events of the year.

Step up to the court. Take a deep breath. Listen to the spectators behind you cheering you on. Toss the ball into the air above your head. Wait for that perfect moment. Now. Serve the ball and send it flying over the net. The game has begun.

That’s just what most servers experience as they step up to the court. The sport of volleyball contains such an invigorating thrill of the first serve, first step, first point scored. For the past 14 years, the Capitol Hill Volleyball Classic has been held on Feb. 15-17 and over that timeframe, it has grown to be one of the largest and most sought after youth volleyball tournaments in the country; more specifically, in the Washington, D.C. area.

“Watching the sport of girls’ volleyball explode in the Mid-Atlantic region of our country over the years this tournament has been operating brings us lots of joy,” said tournament director and co-founder of the Capitol Hill Volleyball Classic Bonnie Goldberg. “And I love being in a restaurant in the area and seeing someone wearing a Capitol Hill Classic t-shirt.”

Like many events in the greater D.C. area, the Capitol Hill Classic requires a lot of time, effort and preparation to become the phenomenal tournament it is. This year there were 968 participating teams spread across 122 courts. The tournament has become a year-round operation, and as soon as the event is finished, leaders, staff, sponsors and the hotel community jump right into action, working on post-event and recap meetings, along with planning next year’s tournament.

“It takes a few months to tie up business operations and follow up with all the different parties involved in hosting the tournament,” Goldberg said. “Our website is updated in mid-Sept. announcing when registration is open, then it’s a sprint all fall and winter in preparation for the event.”

The Walter E. Washington Convention Center, where the tournament is held, is home to many other events and meetings, and although there are 75 courts in Hall B and more than one floor, people believe there could still be changes made.

“Unfortunately, we’ve had to turn hundreds of teams away the past few years,” Goldberg said. “So if I could change one thing, it would be to add another level to the Convention Center in order to fit more teams into the event.”

Not only has the Capitol Hill Classic acted as a reminder of the success of those who have watched the tournament grow as years pass, it is a thrilling chance for young volleyball players to get exposed to the real deal.

“I love competing at Capitol Hill because teams from all over the United States come down to play at the tournament,” WCHS freshman Molly Farrell said. “It’s exhilarating and so exciting.”

Farrell is a setter for Metro 15 North, and although it is her first year on the team, she has been playing for six years. The Metro 15 North team members follow a strict regime, and train hard in preparation for the three day tournament .

“The team practices twice a week and does weightlifting twice a week,” Farrell said. “We work very hard for all our tournaments and to do well in them.”

Ages of participants range from 12 to 18, providing newcomers to the Capitol Hill Classic a chance to earn advice that can apply to either volleyball, or anything in life.

“Just work hard and put your mind to it,” Farrell said.

The tournament having run for 14 years allows for thousands of friendships to be formed and memories to be made.

“My all-time favorite is the look on a person’s face when they are seeing the event in the main halls for the first time,” Goldberg said. “The reaction is always the same, they just cannot believe what they are seeing! Then I typically ask them, ‘Do you want to see the upstairs now?’