Athlete of the Month: Brittini Martin 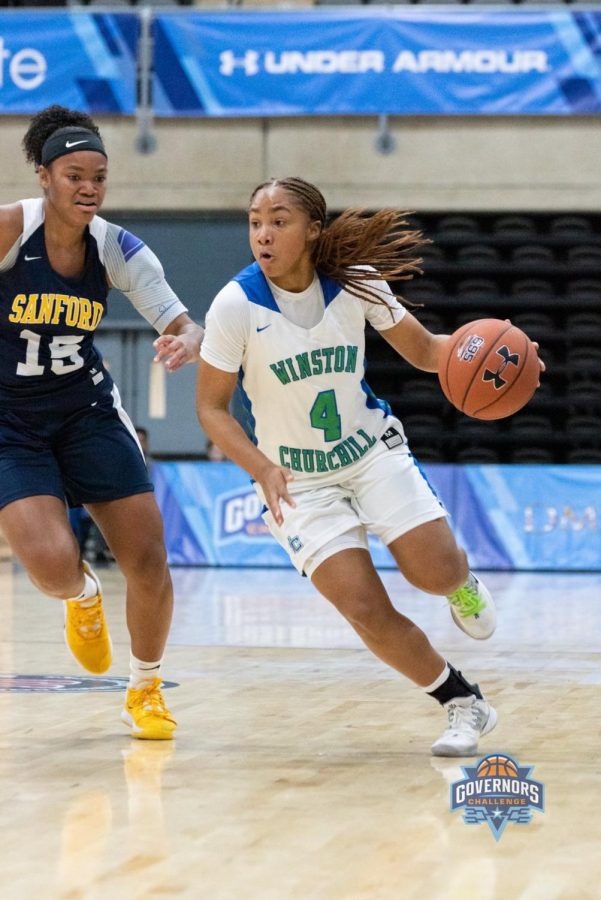 Martin playing at the Governor's Challenge in Salisbury, Md. She won honorable mention accolades in their elite showcase over winter break.

It is only the third game of the girl’s varsity basketball season. Senior captain Brittini Martin takes a shot and scores just like any other game. But it is not just any other bucket. With this shot, Martin has reached the 1,000th point in her WCHS career. In the history of girls basketball at WCHS, only four other players (Catherine Adams, Ali Freeman, Morgan Hatten and Japria Karim-Duvall) have reached this milestone.

“It’s definitely a great achievement because not many people do it,” Martin said. “I’m pretty proud of myself.”

Standing at 5-foot-4, Martin has been playing on the varsity team since freshman year. She has worked countless hours since the age of six to perfect her skills and to be the great athlete and leader she is today.

“Brittini is a great leader because she can lead by example,” teammate and junior Parker Hill said. “She works extremely hard, keeps her head up, and tries to help her teammates whenever they need it. She brings energy to the play while also keeping her cool when the game situation is worse than expected.”

Martin and Hill go way back, playing against each other since 4th and 5th grade on Rising Star teams (a competitive league for boys and girls in grades 5-8). They both played on the Cabin John Middle School basketball team that finished with an undefeated record for the first time in 11 years.

“The starters this year are that same undefeated Cabin John team and my chemistry with Brittini is definitely representative of the time we have played together,” Hill said.

But it is not just her teammates who Martin has won the respect of. WCHS Athletic Trainer Gaby Haubenstricker is another of her many fans.

“I’m not sure I could adequately describe Brittini with words,” Haubenstricker said. “She’s simply one of a kind. She’s driven, she’s unrelenting and she’s tenacious. She’s a leader on and off the court. She practices with the same intensity and focus as she plays in games. She’s a role model of what all female basketball players should aspire to be.”

“Brittini is hard working, motivated and humble,” Coach Blanken said. “Her ability to run the offense and control the tempo of the game has increasingly improved and continued to set her apart from other players of the same position in the county.”

Like any other student athlete, Martin faces the challenges of balancing daily practices and games with a full load of homework but has found ways to keep her body and mind in shape during the season.

“Just physically and mentally preparing yourself,” Martin said. “I would say staying focused and disciplined throughout the season. Managing your time with school and basketball and whatever it is you’re doing. Focusing on that is how I think I stay prepared during the season.”

The girl’s varsity basketball team is undefeated so far and has beaten teams who have won back to back state championships. WCHS is not merely winning; they are dominating. The Bulldogs have won the majority of their games by at least 20 points. Martin remembers one game in particular – their payback game against B-CC.

“B-CC beat us last year by one in the playoffs and that was pretty upsetting, so this year we came in with a competitive mentality and we were ready for them,” Martin said. “That was exciting.”

A big part of the team’s success is Martin’s focus and discipline. Her talents allows her to do whatever is necessary for the team, but she also acknowledges the importance of coming together as a team.

“I’m a pretty competitive person, so I love the competitive nature and the intensity in the game,” Martin said. “And then just the team effort. I love having a team that comes together to win, you know, and it’s not just myself. I love that part of it.”