Athlete of the Month: Noah Rutberg 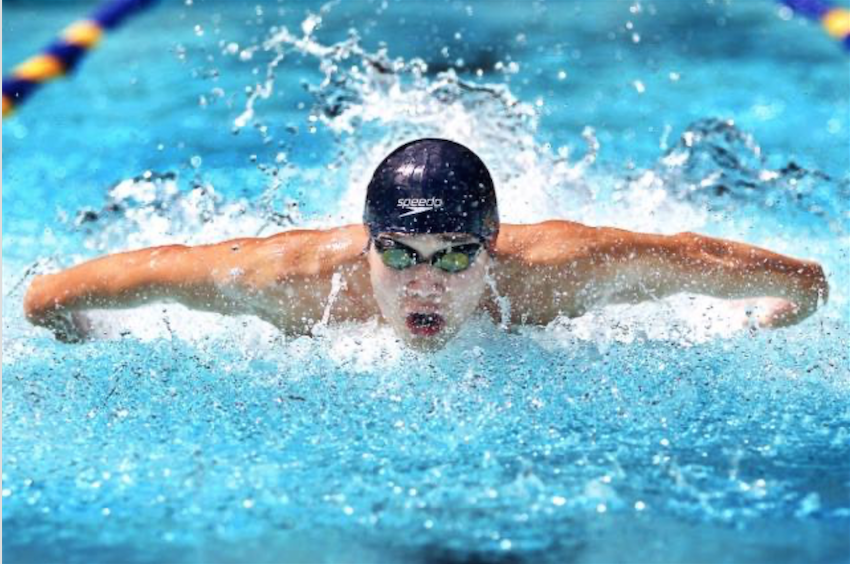 Senior Noah Rutberg has been swimming since he was nine years old, and now he has qualified for the 2020 Olympic Trials.

Senior Noah Rutberg has acquired certain fame around school, known as the WCHS student who qualified for the 2020 Olympic trials and for committing to the University of North Carolina Chapel Hill for swimming.

Rutberg started swimming with his summer swim team when he was only six and started swimming competitively when he was nine. He is one of seven captains of the WCHS Swim Team and also swims with National Capital Swim Club (NCAP), a club that has produced many Olympic swimmers. In addition to this, he also swims with his summer swim team at Regency Estates Swim Club, leaving him about two weeks in the summer when he is not swimming for any team.

“I practice 8-10 times a week. A challenge has been time management because swimming takes up so much time, so being able to juggle schoolwork, swimming and time to relax is difficult,” Rutberg said. “I do my best to not wear myself out and give myself some downtime whether it is watching sports, going out to eat or just napping.”

His rigorous schedule includes practices twice a day and a couple of days in the gym. Rutberg’s hard work and dedication push him ahead as a swimmer and make him one of the best swimmers not only in the county but ranked number three in the whole state. Last summer, he missed the qualifying time for the 2020 Olympic trials by 1/100 of a second, but in December he made the qualifying time for the 2020 Olympic trials.

“Because this past summer I missed my cut by 0.01 seconds, when I got my cut in December I was very relieved and proud of myself,” Rutberg said. “I was really thankful for all of the support from my teammates and friends after I missed the cut in the summer and then after I got the cut in December. Without the support it would have made getting the cut a lot more difficult.”

Rutberg joined the WCHS swim team when he was a freshman, and was just one of two boys who swam in states. Every year he improved his times, and in his senior year, he became one of the captains of the swim team.

“Noah is a dominant swimmer in the county ranking either 1st or second in his main events,” senior co-captain Ziad Bandak said. “He obviously contributes as an actual swimmer, but he also cheers when he’s not swimming and helps the younger or newer kids with stuff they need like finding their lane or knowing the order of events.”

Becoming a captain for the WCHS swim team was one of Rutberg’s proudest moments as a swimmer. He enjoys using his leadership skills to help lead the team and help them be the best they can be. He feels this year that all the team members of each grade are coming together and becoming friends, creating a more collective team spirit compared to his freshman year.

While Rutberg swims all strokes, backstroke became his best stroke, and his 200 BK LCM (Long Course Meters), which is 4 laps around a 50 meter pool, is ranked 1st in the country this school year for 17 year olds.

“I didn’t really choose it, I kind of just swim everything and that became my best stroke. I like backstroke a lot,” Rutberg said. “I try to swim other things too, our team is good in each stroke so we don’t have any weak spots, which is helpful because we can each show our best thing, so I tend to do a lot of backstroke.”

While Rutberg toured schools such as Princeton and the Naval Academy, he knew that UNC was the one. UNC was the school of Olympic swimmers Betsy Mitchell and Phillip Riker. Rutberg committed in October, and is planning to focus on premed, with an involvement of sports.

“UNC had everything that I was kind of looking for out of all those schools. It may not have been the most academically rigorous or have the best swim team, but overall it’s everything I wanted and I love the campus too,” Rutberg said.

Rutberg knows that swimming is the sport for him, because of how swimming is different than most sports.