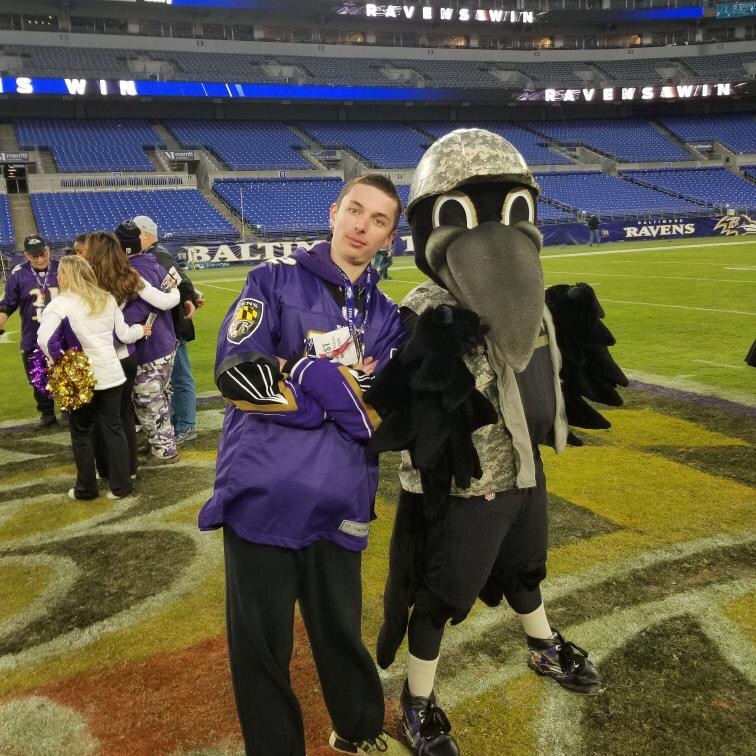 For most sports fans, getting an on-field experience is nothing but a pipe dream. But thanks to some great luck, one die-hard Ravens fan from WCHS is making that dream a reality. Michael Robinson, a WCHS junior, has been able to step on an NFL football field and see what it feels like to be a player before a game.

Robinson was able to become a part of this experience through the Baltimore Ravens’ PSL program. PSL stands for personalized seating license and is a program that many fans, including Robinson and his family, benefit from.

“Personalized seating license means you have the right to buy the same seats and same season tickets every year,” Robinson said.

However, not every member of the PSL program is able to partake in the on-field activities. In fact, only a handful of members actually get the prize. Out of around 50,000 PSL members, Robinson and family were one of the extremely lucky few to win the coveted “Gauntlet Experience.”

In addition to this, Robinson was even picked for the post game experience through another draw. Meaning he won not one, but two separate draws and got to participate in the Gauntlet Experience in one game and the postgame experience in another.

For Robinson, the time he spent on-field was a once in a lifetime experience. Robinson was able to see the players he has followed since day one run onto the field. For even the most casual fan, this would be amazing, but for Robinson, a die-hard Ravens fan, it was otherworldly.

“I thought it was sick being on the field,” Robinson said. “The experience was special because of how it’s very hard to be able to go on the field.”

Robinson was able to do things most football fans can only dream of. He participated and helped out the Ravens with their pregame and postgame shows, and even got to try out kicking some field goals

The 2019-2020 Ravens’ season has been a special one for the successful team, but especially for Robinson. His favorite moment came in week nine of the season, when the Baltimore Ravens defeated the New England Patriots 37-20.

Not only did Robinson get to participate in the Gauntlet Experience for this game, but he also got to see his favorite team take down the juggernaut Patriots in convincing fashion. Perhaps even more importantly, this gave Robinson and the Ravens some bragging rights.

“When the Ravens beat the Pats, I loved it because Redskin fans have become dead silent since,” Robinson said.

Robinson has been to a majority of the Ravens’ home games at M&T Bank Stadium. But as a true fan, he has followed them around the U.S., in places ranging from North Carolina to Seattle.

“I’ve seen them away at Carolina Panthers, Atlanta Falcons, Seattle Seahawks, and this weekend I’ll be seeing them at Buffalo Bills,” Robinson said.

Robinson has been a Baltimore Ravens fan since he was born, sticking with the team through a series of ups and downs ranging from missing the playoffs to winning a Super Bowl. His dedication to the team has no rival. Winning this contest was a dream come true, and could not have happened to a better fan.

“I always was a Ravens fan because my dad was from Baltimore and I grew up being a fan,” Robinson said. “They are my home team.”