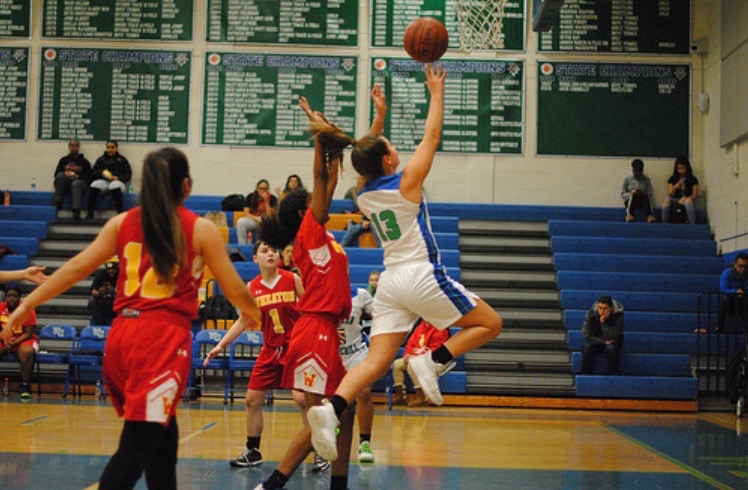 Senior Katie Stanish shoots a lay-up in a game against Wheaton. This is her fourth year on varisty basketball and she is excited for the 2019-2020 season.

The WCHS varsity girls basketball season is in full force. After a tough loss to BCC in the playoffs last season, the team has come back stronger than ever with the addition of four talented new freshmen.

“Even though it was a lot to take in at first, everyone was very welcoming and the transition was surprisingly easy,” freshman Allison Coleman said. “All of the girls are super talented and will force me to up my game.”

Last year, the team only lost by a total of two points the whole season and with a season that many felt ended too early, the team has come back for revenge. Returning with almost the same core with only three seniors graduating in 2019, the team has high hopes for a deep playoff run this season.

“I think a definite team goal for this season would be to see a major playoff run,” senior Madison Cuthbert said. “We have a special and strong team that could definitely do some amazing things this year and we’re really excited to see what we can accomplish.”

In one of their biggest rival games, the team plays BCC on Jan. 31st at 7:15 PM, which is sure to be a can’t miss game. BCC ended the team’s playoff run last season in a buzzer beater after a hard fought game.

“After last year, I think everyone on the team is looking forward to playing them again,” Cuthbert said. “It will be a very competitive and exciting game.”

A key part of their success is how driven and hardworking everyone on the team is. But a vast majority of the team’s success stems from beyond the court.

“I think a major part of our success is our team chemistry,” Cuthbert said. “Everyone on the team gets along well on and off the court.We all work really well in games and practices and no matter what we’re doing. We are able to encourage each other and push each other to work hard and hold each other accountable to the team.”

They practice six days a week for two hours each day. The focus of the practice varies based on the team’s performance at the previous scrimmage or game. A normal practice usually consists of conditioning, reviewing plays and individual work.

“The main reason for the success of the team is our work ethic and chemistry,” senior Katie Stanish said. “Everyone works so hard and always puts in 100% effort which helps make everyone better.”

Even following their nearly undefeated 22-2 season last year, there are always things for the team to improve on, which the team recognizes and is working on for the 2019-2020 season.

“This season something we are looking to improve on is making our game more fast paced,” Cuthbert said. “We want to push the ball and run the court this season; just being able to outrun any and every team would help make us more successful.”

The team has a hard schedule ahead of them but with the level of talent and the hard work they’ve been putting in day in and day out, the team is ready to make a deeper playoff push this year. Their season has just begun, but their hopes are high both for the season and their postseason road to states.

“I am very excited to see our hard work pay off in the games and see us grow as a team,” Stanish said. “I think our main goal is to come out to every game ready to play hard. If we do this, then it is very possible we make it to states which is something we are all shooting for.”