Supernova shows the power of good in sports 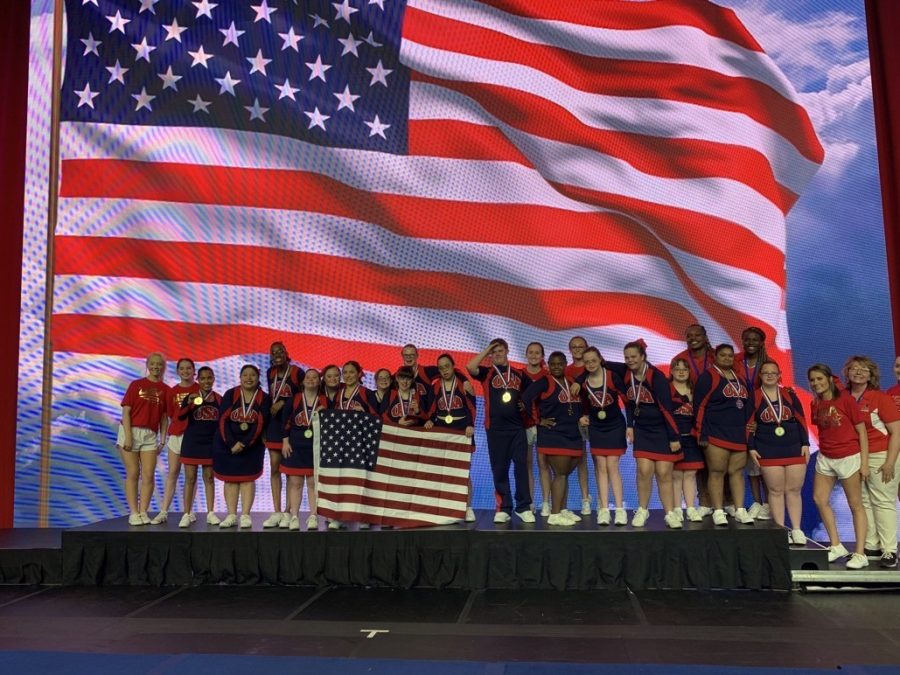 The SuperNovas represent the USA and took home gold medals at the 2019 International Cheerleading Worlds.

Being able to participate in a sport should be a guaranteed opportunity that all people should have regardless of disability. The SOMO Joy cheerleading team does just this and offers kids and adults ranging from 8-36 the opportunity to be a part of a team and to get the experience that other people get.

In the Spring of 2011, the inclusive cheerleading team was formed. Dubbed “The SuperNovas”, this team performs and competes against other “cheerabilities” teams throughout the Maryland region at competitions.

It takes a very special person to coach a team like this. A coach needs to be kind, understanding, compassionate and very patient. Luckily for the SuperNovas, Veronica Septoff is just the person.

“I believe each individual deserves the right to be seen, included and heard,” Septoff said. “This team allows athletes with special abilities to show off not only their athleticism but also the thinking and will power it takes to be a gold medal athlete.”

This past season, the team had a remarkable record of success. At every performance, the team managed to put on a perfect routine consisting of stunts, tumbling, jumps, dance and a cheering section. As this sport is already very difficult for people that don’t have to adapt to many differences, the crowd was amazed at the skills these girls and boys were able to put out and show a whole arena.

“They practice longer and harder than most athletes to get the minimal amount of skills,” Septoff said. “They deserve everything!”

What happens later in the season would make this season that much better than any other. In the world of cheerleading, there is an annual World Competition: The Cheerleading Worlds. It is held in Orlando, towards the end of April, and is essentially the Olympics of cheer. A team has to be invited to attend, which makes it that much more difficult to get to. If the team is invited, they are usually a very well respected team.

The SuperNovas were chosen- over any other American cheerabilities team- to represent the USA in the Special Olympics division. This was a once in a lifetime opportunity for this team and this particular group of cheerleaders. Being able to say that you were chosen to represent your country at the biggest competition in cheer is a very great honor

“I am blessed and so grateful to be a part of this amazing team,” Septoff said.

The team ended up doing incredibly well, leaving the audience in awe of their performances. The SuperNovas were named the gold champions of their division, leaving the entire SuperNovas family in tears. Confetti shot from the sky, the lights went off and the crowd went wild. Everyone was in love with them. The team got their trophy, went to the middle of the floor and took this surreal moment in, with the biggest smiles on their faces.

Not many people can say that they are world champions, which is what makes this experience for this team so amazing. It gives the athletes a sense of accomplishment that will help them to prosper in their lives afterward and the upcoming seasons.

This special group of kids and adults inspires everyone who has the opportunity to watch them. They are role models for other athletes and for people in general. Seeing them work so hard makes everyone around them want to work hard as well.

“They are role models every day,” Septoff said.