Flying high: the cheer team is rising to the top 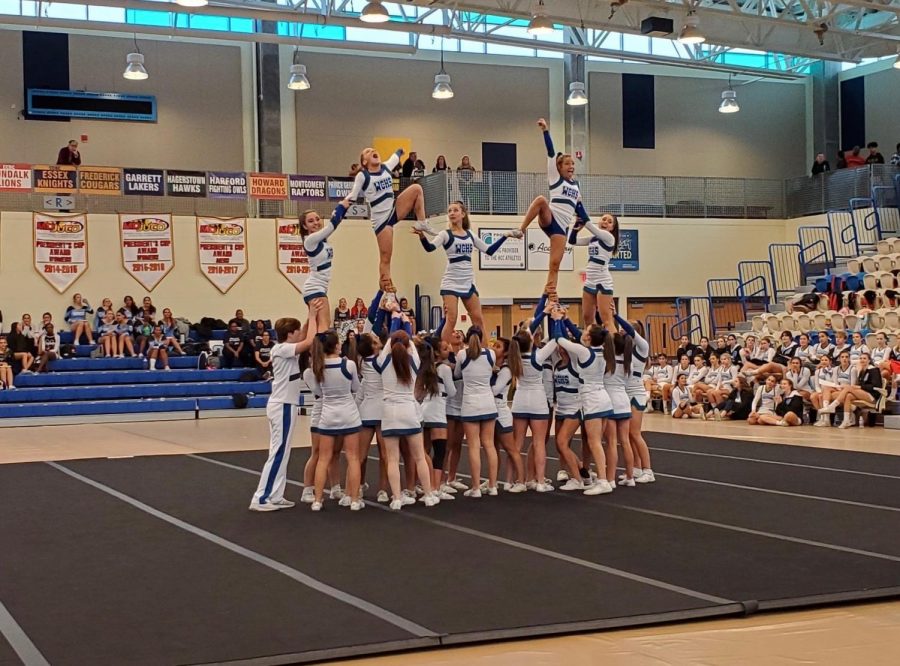 The WCHS cheer team stunts at the MCPS regional competition. The team has been practicing these elaborate tricks all season.

The WCHS varsity cheer team is proving that they are more than just yelling on the sidelines; they are a tight-knit family working hard to represent the school name.

The team has risen to the top with a debut at the Division 1 level competitions. This has WCHS competing against schools like Sherwood, Damascus and Blair High Schools.

“This was our first year in… [Division 1] after about 4 years of being in… [Division 2] and we got second overall which was amazing,” junior Ava Fiallo said.

This year, the team came into the season with a determined attitude and a renewed competitive spirit. With only two seniors, varsity cheer had to prove that they are a force to be reckoned with, and that their young team is a strength.

“I knew that we had a lot to prove,” sophomore Sarah Kimel said. “Not only did we want to show we could fit in with the amazing teams, but we also wanted to place at our county competition.”

The team supported each other throughout the season and created a welcoming atmosphere where each member of the team felt included and wanted. The team participated in the “secret buddy” tradition, in which team members drew random names and then gave gifts and treats every game day to their “buddy.”

“Everyone on the team was very welcoming and friendly, and I was able to easily fit in with the girls,” freshman Sheridan Rush said.

Learning from mistakes is an important part of growing as a team, and WCHS cheer definitely embraces this philosophy.

“I have a lot of experience in cheer and I’m very particular so I’m able to point out mistakes or little things that others may not have noticed,” Rush said.  “I also bring another perspective for advice and tips.”

Practice was held every day after school during the fall season The team’s dedication to their work has paid off and led to amazing results.

“It was the best feeling seeing our hard work pay off in such a big way,” Rush said.

The team rode this momentum into the regional competition on Nov. 2, and placed 13th out of all 3A/4A teams in the state. Only the top 15 schools in the region qualify for this meet, so this was a tremendous achievement.

“We were all sitting in a circle and when they announced first place to us everyone jumped up and as I looked around everyone was super happy,” Rush said.

The team has come together by leaps and bounds throughout the season. The team grew from members to a whole family, and this bonded the team for life.

“It was so evident that everyone on the team wanted us to succeed and that really motivated me,” Kimel said.

The team has high hopes for the future, and with so much improvement over one season, there is room for continued growth within the program in the coming years.

“We all support one another,” Rush said.  “We’ve been through many ups and downs together and we’ve improved so much since the beginning of the season.”