Field hockey closes out the season with a regional win 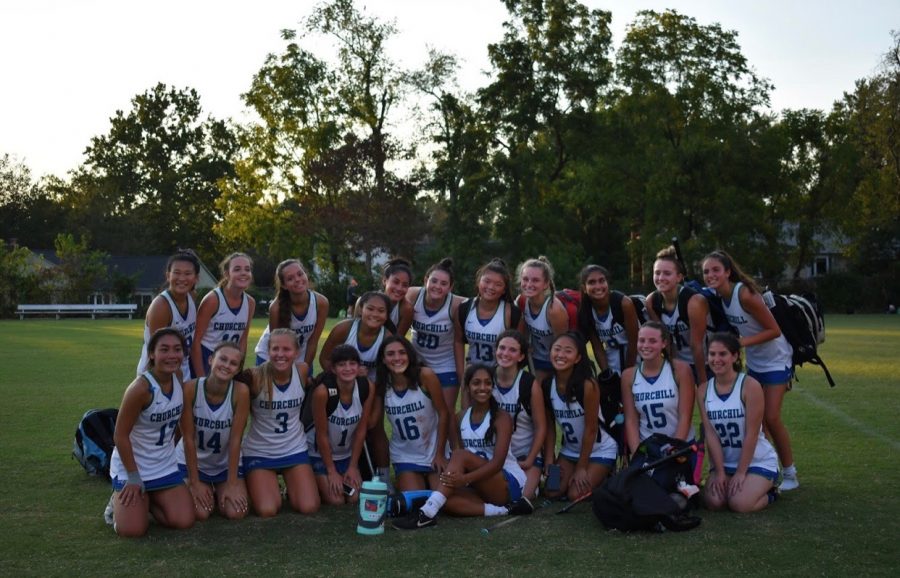 The 2019-202 WCHS field hockey team poses for a team photo on their home field.

Yet another undefeated season for WCHS field hockey has passed as they head into the 2019 playoffs. Over the past 4 years, the regular-season record for the varsity field hockey team has been an astounding 47-1.

Heading into the 2019-2020 season off of a 14-2 season after just coming up short in the state championships, hopes were definitely high for this season. Even after the loss of eight seniors, the drive of every member on the team led them to another successful season.

One of the focuses of the team was to have unity. Printed on the back of their shirts is the word “unity” to remind them of their common goal.

“The main goal of the team going into the season was to have unity,” junior Claire Kim said. “The team understands that we have to work together to reach our end goal of success.”

Their hard work has not gone unnoticed, as The Washington Post ranked WCHS 9th on their Field Hockey Top 10, right behind Broadneck High School and right above Huntington High School.

“I think our success comes from the hard work we put into every practice and our coaches really caring about our lives and trying to accommodate us,” junior Katherine Yi said.

Of course, behind every great team is an even greater coach. Coach Cay Miller has been the varsity field hockey head coach since 2010. Miller came into the season as the 2018-2019 Outstanding Field Hockey Coach of the Year, and looked to replicate her success from previous years by pushing her team to its best.

“Throughout the season, Coach Cay pulls every player to the side to have a one-on-one talk during practice to make sure everything is going well in our lives,” Yi said. “This really helps to let us express any concerns we have which in turn allows us to make our team focused on the sport, rather than what’s going on at school or home.”

As on any team, there are unforgettable moments that make all of the hours of hard work truly worth it.

“The best part of the season for me was definitely when we started our regular season and we got into playing tough teams like Urbana and Quince Orchard that shook us and challenged us but only made us stronger as a team,” senior captain Lucia Alem said.

Even with an undefeated team, there are always things to work on. The team has won a large majority of their games in the past two seasons. While this is a good thing, it can also lead to a loss of intensity due to the constant victories.

“Going into next season, I think we have to work on playing intense the whole game since we are constantly losing our intensity when we start winning,” Yi said.

The WCHS field hockey team continued their dominance into the postseason, defeating Wootton High School 3-0 to advance to the state semi-finals.

“Every player on the team knows that they are important with a role on the team, so we all play with a larger goal in our minds,” Kim said.