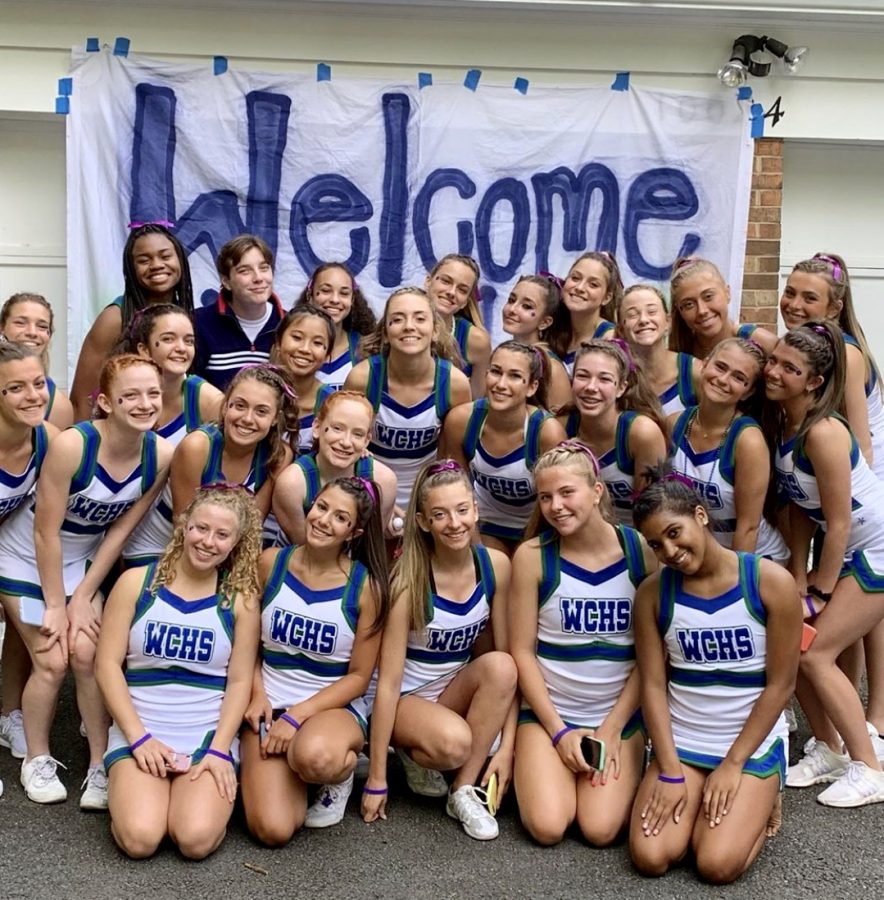 WCHS Varsity Cheer welcomes the newest additions to the team before the season opener football game.

It’s the typical fall Friday night at WCHS. The football team takes the field with overwhelming exhilaration. The bleachers are overflowing with eager students and restless parents. The air is ripe with the smell of fresh popcorn and greasy cheese pizza. And, beneath the gleaming stadium lights, is the WCHS varsity cheer team. The typical Friday night means the typical cheer team… right? Don’t be fooled. This team is different. Standing proudly amongst his teammates is freshman Jack Hebden.

Completely new to the world of cheer, Hebden has been able to use his six years of experience in gymnastics to propel him to success on the team. Hebden put aside any initial hesitation about trying out and impressed the coaches with his incredible skills. Both he and his teammates are elated at the results of his hard work.

“Jack brings a lot of energy and sass to the team,” said junior Rera Ibraheem.  “He is an amazing addition to the team, and I am so grateful to get to cheer alongside him. He is always energetic and ready to help and encourage his teammates.”

Although his experience on the team so far has been nothing short of perfect, being the only boy on the team comes with a few downsides. He couldn’t be happier with the way the season has been going, but he has noticed a difference between convenience for him versus the girls.

“The only problem that I’ve faced is that I get my uniform a couple weeks later than all of the girls,” Hebden said. “It takes so long to get here because they have to custom order the boy’s uniform, while all of the girls’ uniforms are already made.”

Regardless of any hardships he may face, it is all worth it to Hebden. He is very appreciative of the acceptance that he has experienced on the team. Prior to trying out, he feared that being the only boy on the team would come as a shock to the girls. Much to his surprise, he fit in perfectly with his teammates as if they have been cheering together forever.

“Everyone on the team is super nice and they treat me the same way that they treat each other,” Hebden said.“They made me feel really included in the team.”

His teammates feel similarly and now can’t imagine the team without him. They have created a welcoming environment to make Hebden feel as comfortable as possible. They are looking forward to cheering with him for the next few years.

“Everyone on the team was so excited when a guy finally tried out and then getting to know him and spending time with him only made the team like him even more,” Ibraheem said.

Hebden hopes to inspire aspiring cheerleading boys to pursue the sport just as he did. He encourages other boys to set an example and redefine what it means to be a cheerleader.

“I really want boys that are thinking about doing cheer to come and try it,” Hebden said. “I don’t want boys to be scared or intimidated by cheer because it has been labeled as a ‘girls sport.’ I want everyone to go out and do that sport that is labeled as a ‘boy sport’ or a ‘girl sport’ because I believe that would have a big impact on younger kids who see people like them doing something they want to do.”

Through cheer, Hebden is able to both inspire others, and express himself. It is clearly more than just a sport, it is a way of life.

“Not only do we all get to do what we love while proving ourselves to other teams, we also get to form unbreakable bonds with our teammates,” Ibraheem said. “It really is an incredible experience. Jack has made that experience a great one for everybody on the team and the relationships that he has formed will last forever.”