Wank runs into success on the track field 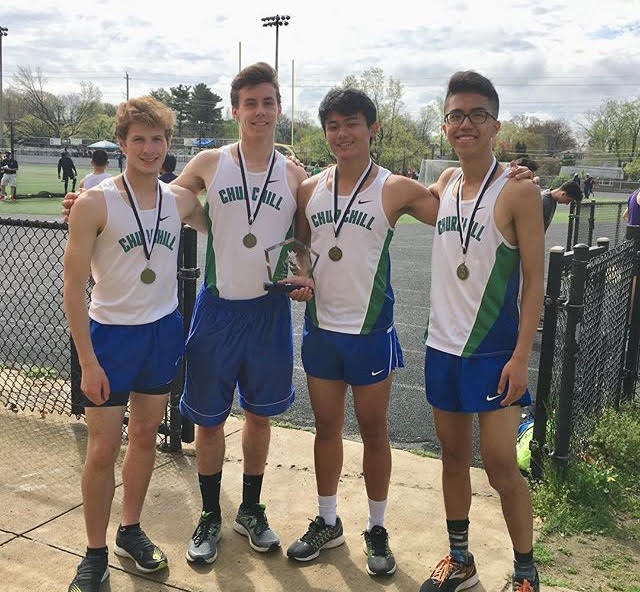 Sam Wank [far left] poses with fellow trackmates before the TC Williams Invitational on May 4th, 2019. Wank runs six days a week, swims for Churchill, and is an important member of Churchill’s varsity track and cross country teams.

The spring sports season may be coming to a close, but for some athletes, that does not mean they are stopping. Some WCHS athletes participate in sports year-round, even when the school year is over. The grind never stops for many at WCHS.

Sophomore Sam Wank is a member of the varsity track and cross country team. He has been running since seventh grade and joined the WCHS running team his freshman year. He has loved every minute that he has been on the team.

“For me the best part about running are some of the meets we get to go to,” Wank said. “But mostly the friends I’ve made on the team and getting to know some people from other schools as well.”

Wank runs six days a week during each season. He is on the sprints team and does sprint workouts almost every day. A sprint workout can be anywhere between two to four miles. This is different than the cross country season, where he will run around 30 to 40 miles in a week.

According to WCHS track coach Paul Jacobson, Wank is a hard worker on the team and always has a great attitude. One of the highlights of this season was when Wank and his team won first in the 4 by 800 in the Viking Invitational.

“We didn’t win the 4 by 800 last year,” Jacobson said. “However, this year Sam has really helped our team in this event.”

Jacobson encourages Wank to do what makes him happy. Even though it would be nice to have Wank on the indoor track team, Jacobson understands that Wank is also very good at swimming. He is varsity on both the swim team and the track team.

“I see him as one of the best middle distance runners in the county,” Jacobson said. “One of the best in the state as a sophomore. And he definitely has the talent to run in college.”

“Sam boosts our team’s spirit,” Vinal said. “He motivates other people on the team to work harder.”
Wank is excited for his next two years in both cross country and track.

“I plan to run with Churchill for the rest of high school,” Wank said. “And I hope that I can continue running during college.”