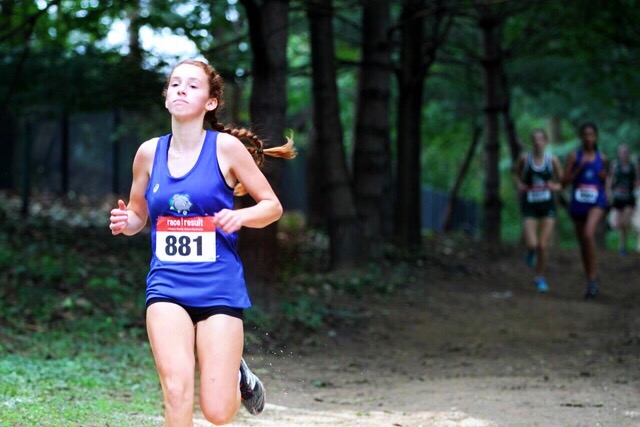 Bridget Kelly runs ahead of the pack during one of her meets. She averaged a 6:05 in her 1600 meter events during the 2019 Outdoor Track season.

She hears her teammates chanting her name from the bleachers. Gathering up her last shred of energy, she sprints past the finish line. The clock flashes 6:01.

Freshman Bridget Kelly has been running since the eighth grade, when she joined the cross country team at Herbert Hoover Middle School.

“I love the feeling, right after you finish a workout or a run, you get a sensation, a runner’s high,” Kelly said. “I feel like I’m on top of the world, and I can do anything.”

Kelly joined the cross country team at WCHS in the beginning of the year, where she made varsity. According to MOCORunning, as the indoor track season began, Kelly started off at a 6:11 and had one goal in mind: break 6:00 minutes.

“I really want to break varsity time because it shows that you’re working really hard and you’re improving,” Kelly said. “It’s kind of frustrating when you’re not [improving] because I’ve put in so much work and it’s not really showing yet.”

At her past outdoor season meets, Kelly averaged a 6:05 in the 1600 meter race. At one point, she worked herself too hard and got injured, adding some time to her event.

“If you tend to work really hard, you’re more prone to injury,” Kelly said. “I injured my knee, which made it really hard to run. I had to miss a few workouts, and I did worse when I came back.”

“She’s improved very much,” Jacobson said. “She was very inexperienced at the start of the year, but with the help of her teammates and doing the workouts, she’s almost gotten up to varsity level, which is very good.”

Kelly values her teammates and how they inspire her to do better. She feels they are an important part of her accomplishments.

“It’s really encouraging to have people running around you, or even cheering for you, because they make you push and try your hardest,” Kelly said. “I always think that if they can do it, so can I, which makes me want to finish strong.”

Other teammates value her hard work and admire her for always striving toward her goals.

“She is very tough on herself and pushes herself 110 percent every time she runs because she is dedicated to getting better,” freshman Jessica Qiu said.

Looking back on her outdoor season, Kelly is proud of her achievements but will continue to work hard. At the end of the season, she ran a 6:01 at the Counties B Meet, just two seconds above her goal.

“This season wasn’t as good as I would have liked, but all in all, it was fun and a good experience,” Kelly said. “I didn’t hit the times I was working towards but being a part of the team as well as going to practice and meets was fun. I’m going to push harder in the summer and continue my training, so I can get it next year.”

Although Kelly knows she has the rest of her high school career to make varsity level, she does feel disappointed that she did not make her goal. However, she is maintaining a positive and hopeful attitude about the future.

“She takes things in strides,” Jacobson said. “She’s been trying to get the six minute mile for so long, and she almost made it at her counties meet. She’s getting really close to breaking it, but she’ll keep trying and get there, eventually.”