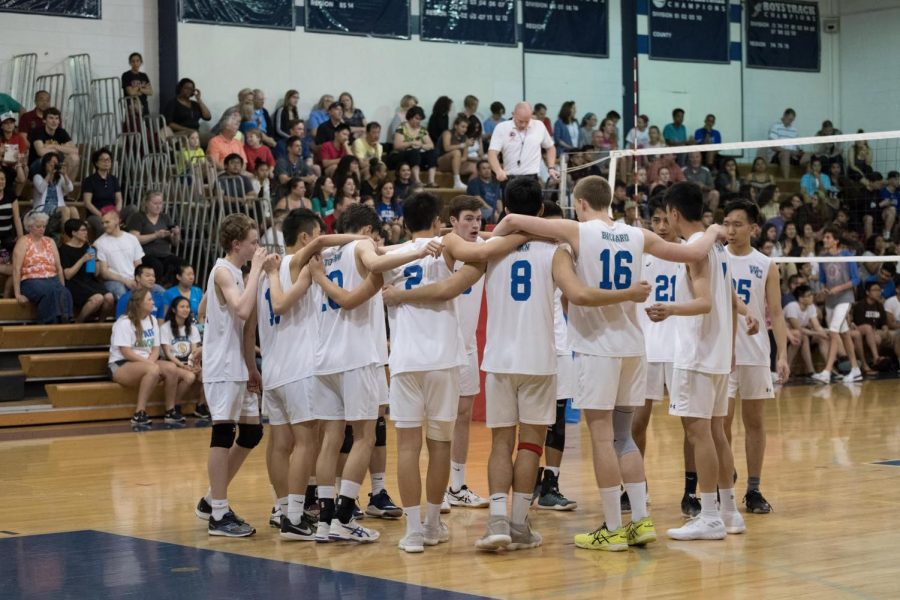 The boys volleyball team at county finals on May 15, 2018 against Walter Johnson. WCHS lost 3-1 last year but hope to defeat them in the championship this year.

This season marks the 28th year that WCHS has had a boys varsity volleyball program. The team (10-1) had a very successful season with wins against Blake, Kennedy, B-CC, Whitman, Richard Montgomery, Wooton, Paint Branch, Clarksburg, Sherwood and Springbrook high schools. The Bulldogs’ only loss came earlier in the season against their rival Walter Johnson in four sets.

The team is led by Head Coach Rajesh Rathnam and Assistant Coach Wilson Lin. Ratham, known by his players as “Coach JJ”, is a WCHS graduate and was a junior when the boys volleyball program first started. He played as a defensive specialist (commonly known as DS) and outside hitter.

“In 1991, I was a junior at WCHS. That year, we were defeated in the quarterfinals by the eventual champion, Paint Branch,” Rathnam said. “The following year, my senior year, we made it to the championship game and lost to Rockville High School. In 1993, WCHS won the championship for the first time.”

This year, the team’s main focus is to win the county championship finals. Only 16 teams make the single elimination tournament. The championship game will be held at Magruder High School on May 14th. Last year, WCHS lost in four, hard fought sets to Walter Johnson in the county finals.

“Our goal is to win county finals,” junior and captain Jeffrey Tsao said. “We have what we need to win. We just have to work hard and stay focused.”

One strategy to accomplish their objective was to win every match in straight sets, which they did for every match except against Walter Johnson and Clarksburg, in order to finish with the highest seed possible entering the playoffs. In the tournament, the higher seed hosts the matches until the championship game.

“Other than Walter Johnson, no other team is a real worry at this point,” junior and middle hitter Ryan Case said. “Other teams are good but we should win as long as we play at our level.”

A key factor in the team’s success is that 11 of the 12 players have club volleyball experience and most of them play for the same club, which other boys volleyball teams can not often claim.The boys either play for the Maryland Volleyball Program (MVP) or The Volleyball Practice (TVP), which further develops their bond as a team.

“Generally, there are far more girls who play club volleyball than boys who do,” sophomore and DS Noah Schiff said. “Since most high school boys teams do not have many club players, they aren’t that good as a result, and aren’t as relevant as the girls teams.”

Team bonding is an important part of any team sport, but it does not stop off the court for our boys volleyball team. They often hang out outside of school, play beach volleyball and watch their match recordings as a team.

“My favorite part of being on the team is how it is similar to being in a family,” Tsao said. “Being so close to my teammates makes volleyball so much more fun.”

The sense of togetherness is a feeling not only shared by the players, but also the coaches.

“We’ve got a great group of guys that love the sport. It’s been a really fun season so far,” Rathnam said. “Although we’ve played well so far, I do not think we have peaked. We have room to grow and it will be fun to see how good we can become by the end of the season.”

For more updates on the team, make sure to check out their Instagram @churchillboysvolleyball.