All WCHS sports should have a junior varsity team 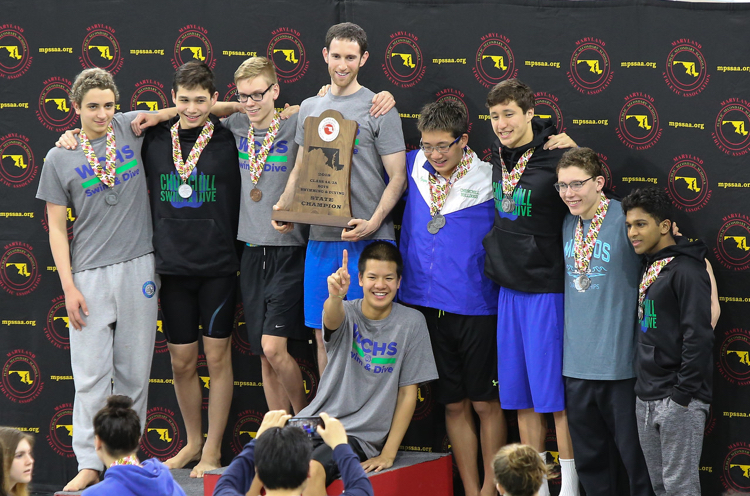 Coach Tappis stands with the boys team after winning the metros competition.

This year, WCHS swim and dive coach Christopher Tappis decided to add a junior varsity (JV) swim team. Traditionally, swim and dive was one of WCHS’ few sports that did not have both varsity and JV teams. This change should encourage the rest of WCHS athletics to add a JV team if their sport does not already have one.

According to captain and senior Steven Mendley, the only effects he foresees are that practices and team events will be more crowded. He supports the addition of a JV team as it gives more people the chance to be on the team.

Being a part of a team provides students a sense of community and belonging. When a sport only has a varsity team, the opportunity for students to become involved automatically becomes limited.

According to the National Federation of State High School Associations website, studies have found that participating in extracurricular activities, such as being on a team, positively correlates with students’ friendships and promotes students’ sense of well-being, purpose and belonging.

No matter what the sport is, every student should share an equal chance of making the team, and that starts with numbers. Yes, teams should still be made up according to athletes’ skill level. However, a freshman will often be less prepared and less advanced than a senior who has been on the team for the past three years. This is natural. There is a three year age difference. Having both a JV and varsity team demonstrates to the freshman that it is acceptable for their skill level to fall below older classmates. It also provides students the opportunity to cultivate and improve their skills in an in-school athletic setting. Sometimes, all it takes is more practice and more confidence.

Not making a sports team can be detrimental to a student’s confidence and may even influence them to quit the sport they wanted to play. It is unfair if a rookie student gets cut from one sport while a friend of theirs with the same skill level makes the JV team of another school. In relation to self-esteem and fairness, having two teams increases playing time opportunities for student-athletes. Such a thing is critical to an athlete’s skill and cognitive development.

According to an April Changing the Game Project article, an organization dedicated to transforming present-day youth sports culture, part of the problem with youth sports today includes coaches who forget the level and age of their student-athletes. By this, coaches focus too much on the idea of winning and less on the lessons and long-term impact team sports have on players. This projects a myth that enjoyment and competition cannot coexist.

At the end of the day, the main objective of playing sports should be to teach good sportsmanship, provide belonging and community, exercise and to have fun. Excessive competition comes when students vie for the few available spots on one team, especially when that team is varsity.

Athletics programs should not have discrepancies across individual teams. If the soccer team has a JV team (meaning more opportunities for players at varying skill levels) then why should another sport only have varsity? When it all boils down, these are teenagers, and this is extracurricular athletics—not the World Series. What students will remember more is the experience of being a part of a team. So why not make the opportunity to be on a team equal for all students?