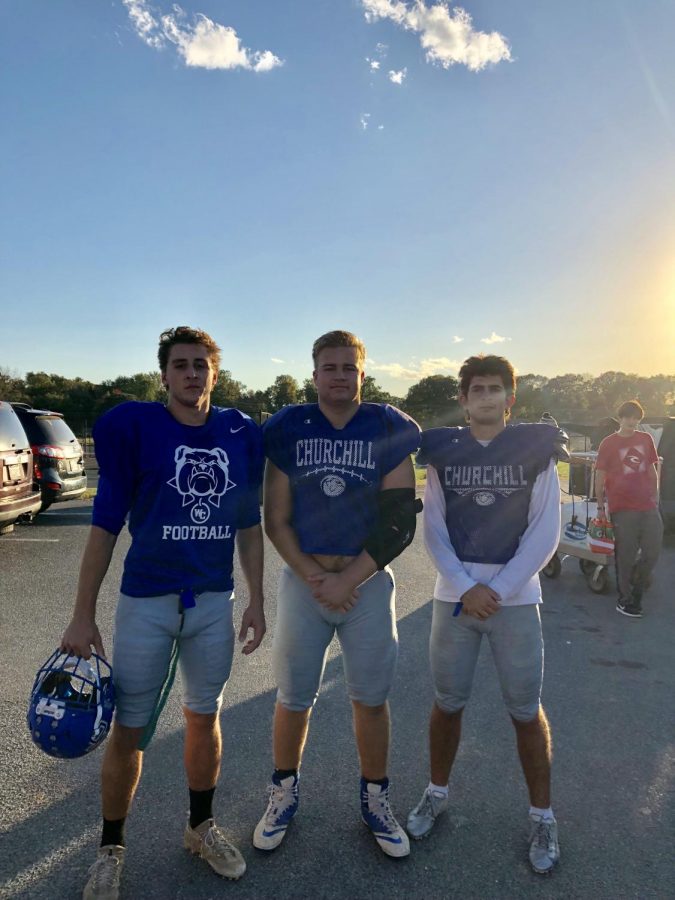 (From right to left) Seniors Jack Butler, Nick Wagman, and Nick Smyth committed to colleges they’ll be attending in the 2019-2020 school year.

The one thing on the mind of CHS students during the fall of their senior year is college applications: where to apply, when to apply, what you need for each school.

For boys varsity football seniors Nick Wagman, Nick Smyth and Jack Butler, their application process for college is slightly different than the average CHS senior, being that the three of them have each committed to play their respective sports at the colleges of their choice.

“I was really happy and excited, it took a lot of stress off just knowing where I was going to college and be playing football next year,” Wagman said.

Wagman, who plays tackle for CHS’ offensive line, committed to Rice University for football, a Division 1 school for football. However, for all the boys their college experiences won’t solely be about playing their sport.

“The biggest thing I’m looking forward to at Rice is the challenges, both of playing Division 1 football and going to such a good school and managing both of those,” Wagman said. “It’s also definitely going to be a new experience for me which is also super exciting.”

Smyth, who plays tight end and outside linebacker for the football team, committed to Bowdoin College for football and has been working to improve his skills throughout CHS’ fall season.

“I was working hard nonstop in the offseason and especially this summer to improve my athleticism,” Smyth said. “I had my speed and agility tested by several coaches at camps. It was a lot of work and most of my free time I was working out with Patrick Reeves [s/o PR Strength].”

Being part of a team supported by thousands is just one of the thrills of playing a sport in college.

“I’m mostly looking forward to being a part of the Bowdoin tradition,” Smyth said. “They have one of the oldest teams in college football as a whole, and they are doing a lot to modernize while keeping that old tradition with it. It’s also a great group of athletes, and I can’t wait to help improve the team.”

Going through the recruiting process can be tough for any athlete, but in the end, it usually works out for the best.

“I felt relieved that the recruiting process was over, but more importantly I was happy with where I ended up deciding to commit,” Butler said. “It was a long and stressful process that put me through an emotional roller coaster, but in the end I think CNU was the best choice for me.”

Butler plays outside linebacker for CHS’ football team, but ended up committing to Christopher Newport University (CNU) for lacrosse, which has been a huge part of Butler’s life for the majority of his childhood.

“I have been playing since 5th grade, but I really started to work on getting better and getting to the next level in 8th grade,” Butler said. “I hit the wall at least 5 times a week that year and my skills drastically improved. My work ethic leading up to my commitment was exercising or doing something to better myself at least once a day. Whether it was running, hitting the wall, or just getting a stick in my hands with the boys, there was always something I was doing that was lacrosse related.”

For Butler, playing lacrosse in college has always been a dream. After committing to CNU, Butler knew he had a lot to look forward to in years to come.

“I am looking forward to being a part of something that has the talent and potential to win a championship,” Butler said. “Also, I am looking to be involved with something bigger than just myself or a small group of guys. The entire team has bought into the idea that a championship is in our sights and it is going make my 4 years at CNU that much better. Lastly I am excited to be on the field with past teammate and best friend, Brady Altobello. He and I grew close my junior year and it is amazing that I get to spend another three years on the lacrosse field with him.”