Bulldogs look to score a spot in Md. playoffs 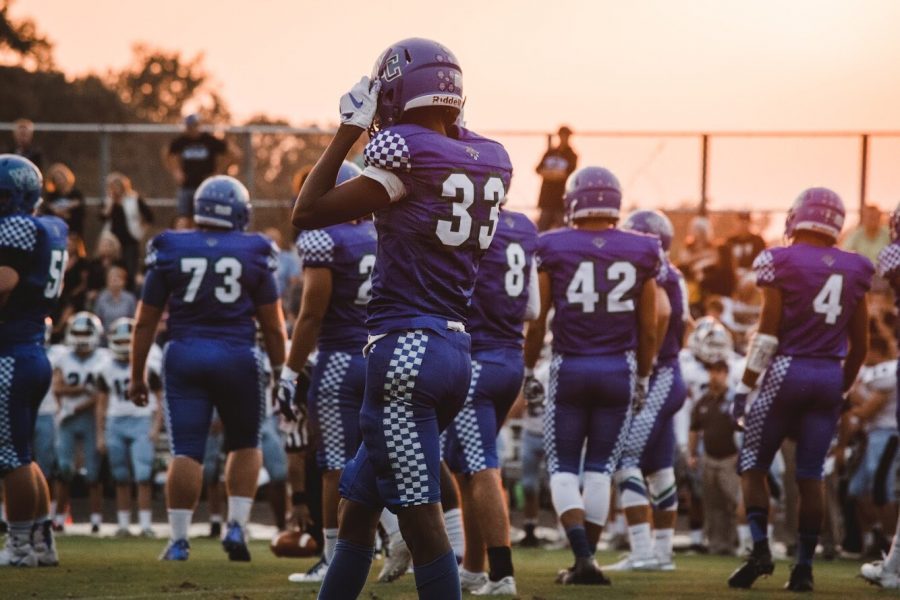 Senior Kadron Washington and the rest of the bulldog football team have started out the season at a high level, surprising most of Montgomery County. The team looks to continue improving through the rest of the season and will try to secure a spot in the MPSSAA playoffs.

Varsity boys football has started this year off with a 5-1 record and has brought with its success a transformed sense of school spirit among CHS students.

Former National Football League (NFL) players and current CHS head coach and offensive coordinator Willie Williams and Chris Samuels, respectively, are leading the team for their second year, along with senior captains Jake Jacobs, Michael Janis, Matt Kalavritinos, Amir Kazemipour, Joe Raab and Nick Wagman. After endless offseason workouts, intense practices and bonding both on and off the field, all the work the team has put in is being shown on the field.

“The best part about being on the team is being a part of the journey that we have gone through,” senior running back Patrick Richardson said. “With everything we go through—7 on 7, Salisbury, workouts and two-a-days—you build huge relationships with each and every one of your teammates. When you go through tough games together and workouts where you get pushed to your limits, not just during the summer but during the season as well, that strengthens our relationship with each other and makes us stronger.”

Richardson scored five touchdowns in the team’s 48-9 win against Wootton HS and is a key player when it comes to being open to catch passes from Janis. Richardson has also scored a total of 16 rushing touchdowns and three receiving touchdowns for the team this season.

“Being able to contribute points on the board is definitely a great feeling, but I try not to get too caught up in the moment and just remember that it is a team effort at the end of the day,” Richardson said. “I have become a lot more physical and more disciplined in terms of my playing style. Overall, my connection with my teammates have also played a huge role in the way I play as well.”

At the start of last year’s season, the team started off with an 0-2 record and ended with a record of 5-5, which impacted their playing mentality.

“It was a struggle every week to be focused and get it together, but this year we think we can actually do something special,” Wagman, who plays offensive tackle, said.

The team has come far from the start of last year and now plays every game with heart and confidence.

“We feel good about how the team is playing right now but we stress to the players that any Friday, they can be beaten,” Williams said.

Last season was William’s first year as head coach at CHS and with the players of the team.

“Last year was a building process,” Williams said. “Myself and the other coaches had to get our players to buy into new ways of doing things at CHS. The mindset of our players is different, they believe they can win football games.”

While last year was Williams’s first year with the team, the rest of the boys had been playing together and bonding for years.

“We have been brought together through the journey we have taken,” quarterback Janis said. “Since freshman year, our senior class has been playing together. Throughout the years, we have spent months together, enjoying some great moments and enduring the rough ones. No matter what, we all stuck together and had each other’s back.”

Part of what makes a good team is not only teammates having each others’ backs, but also coaches having their team’s back and leading in the best way possible.

“Coach Willie [Williams] knows how to coach every kid individually,” Wagman said. “I get yelled at a lot because that’s what I respond to, but there are some kids that don’t like getting yelled at and [Coach Williams] knows who to coach in each way. All of our coaches are like that, which is great.”

This season is just beginning and the team is preparing to leave it all on the field at the end.

According to Williams, he hopes that by the end of the season CHS will be respected throughout the county.

There is only one goal in everyone’s mind: working hard and coming out on top.

“We all have a common goal to make the playoffs and keep winning games,” Janis said. “We understand that this comes by playing one game at a time and not looking too far ahead or backwards. I am definitely going to miss stepping out on the field every Friday night—there is just nothing like Friday night lights.”