Athlete of the Month: January 2018 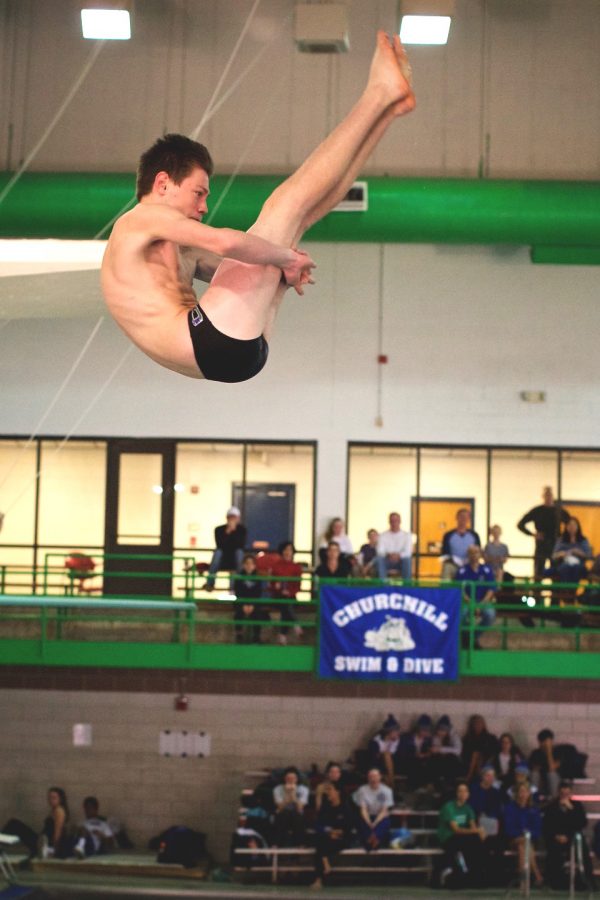 Seven years ago junior Robert Rizzo stepped on the diving board at Country Glen pool for the first time. Today he is a key contributor to the CHS swim and dive team and one of the best divers in the county.

This season, Rizzo has helped the CHS Swim and Dive team pick up wins against Walter Johnson High School and B-CC High School by tallying score of 180.85 and 157.85 respectively. Rizzo finished in 1st place in the diving portion of both meets.

“The best scores I’ve ever gotten from judges were nines and nine and a half,” Rizzo said. “In a high school competition a total score of 180 in a dual meet is my best, and for summer competition it’s about 245.”

In diving, each judge gives a score ranging from zero to 10 based on the appearance of a dive. The total score of a diver in a meet depends on the number of dives done and the difficulty and appearance of each dive. During dual meets, each diver completes four dives, and for each dive, the scores of the three judges are added up and multiplied by the difficulty level of the dive so the diver can receive a total score.

Diving is unique from other sports and enjoyable in that the high pressure of diving, a mistake can cause a belly or back flop and embarrassment in the water. At the same time, diving allows athletes to combine creativity with form in order to excel at a difficult dive and excite an audience.

“The best part about diving is learning a new dive because it’s always a new and exciting feeling while you’re in the air and showing that you are improving,” Rizzo said.

Rizzo dives all year round and at sometimes dives for multiple teams at the same time. He participates in school, club and summer diving.

“I’ve dove for a club team called Montgomery Dive Club AAU National Team for about a year and a half,” Rizzo said. “I also dive for CHS and in the summer I dive for a pool called Country Glen.”

Aside from being an excellent diver, Rizzo is great leader and teammate on the CHS swim and dive team. He inspires other athletes to improve their form and has helped new team members adjust to being a part of a team.

“He always coaches people on the side,” junior diver Jack Foster said. “He was really good at getting the freshman into the swing of things [at the beginning of the season].”

By executing difficult dives, Rizzo provides a great example to the more amateur divers on the team.

“His level of diving makes him a really good example to most kids on the team,” Foster said.

This diving season, Rizzo is excited by his own potential success as well as CHS’ potential to be the best dive team in Montgomery County.

“CHS has the strongest diving team in MCPS this year in my opinion,” Rizzo said. “I’m hoping we have a lot of divers place well at the metro competition in a few weeks.”

Rizzo is focused on the CHS team and doing all that he can to help them succeed. He has gained a tremendous amount of support from his teammates and the team has also given him an opportunity to make new friends.

“The best thing about diving for CHS is the huge amount of support from my teammates and all the new friends I’ve met,” Rizzo said.