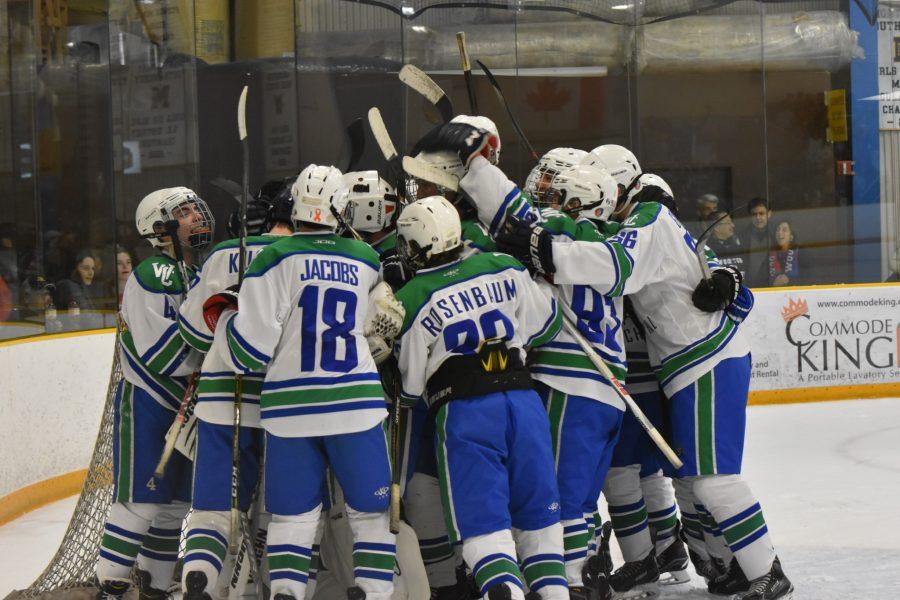 The Bulldogs celebrate on the ice after defeating Wootton 3-2 Nov. 18.

Starting off the season with more new players than old and with the pressure of winning a fourth championship in five years, the CHS Varsity 1 Hockey Team is up for the challenge.

Last season, V1 finished first in the Maryland State Hockey League, with a record of 12-0-0, and came third in the national championship.

“I’m pretty optimistic [for the upcoming season],” junior right wing Jack Taylor said. “Although we lost a lot of talent, we still have a bunch of good players that are ready to fill the roles. Hopefully we can maintain the team’s history of dominance.”

Starting off the season with a whole new dynamic is something the team is going to have to work with and make the best of.

“Last year, most of the kids were seniors who had been playing on varsity for four years, and it was almost like a continuation of the year before,” Taylor said. “This year we will need a little time to adjust. We have a lot of talent and a lot of speed that other teams have trouble trying to deal with. The scores in the beginning may be lopsided, but we will start to work well together soon.”

It will take some time for the new players to fill the roles of the graduated seniors and for the team to become the unified group they have been in the past, but hard work always seems to pay off. The Bulldogs started off this season with one win against WJ and one tie against Whitman.

“It will be very difficult, we lost several great players, and the kids who are returning are, for the most part, unproven players that a lot will be asked of,” head coach Ray McKenzie said. “We have to see how they respond.”

It is also not just the new players who are going to be pushed. Old players are aiming to improve their game this season as well. The team as a whole is aiming to improve on weaknesses from past seasons and from the beginning of this season so far. They plan on building a dominant defense and increasing scoring from forwards.

“Personally, the biggest challenge will be playing a lot of minutes and being a leader [and] role model for the younger guys,” senior forward Andrew Kurapov said. “I know a lot of people will rely on me to produce and lead the team … especially since I’m a senior, but I hope that will only elevate my game and hopefully I will be able to elevate the others’ game.”

For new players who went from V2 to V1 this season, the pressure is on.

“The pace of the game has definitely been a major difference from V1 to V2,” sophomore left wing Hayden Farrand said. “I do feel a lot of pressure and I think a lot of us do because we all have to step up if we want to achieve what the seniors were able to do last year, which was win states. We have to work hard at every practice to be the best that we can be.”

The more vigorous practices and the quicker pace of the game have been huge adjustments for new players.

“There is just so much more skill on the ice and everything is much faster,” junior goalie Alex Plastrik said. “V1 practices just as often as V2 and JV and for the same amount of time, but V1 practices are much more intense than the V2 and JV practices. I know I [also] have some big shoes to fill replacing [the old goalies], but it just makes me want to work harder and get better.”

The new friendships and the bonds players make with one another while being on the team help the team work together and become united.

“The best part of being on V1 is the friendships you make with all the guys,” Plastrik said. “We have team dinners on Thursdays before games and we eat lunch as a team on game days and you really get to bond with everyone. No matter what happens, my teammates will always be there for me.”

The outcome of the rest of the season is unknown as of now, but V1 is definitely in it to win it.

“I’m excited for the Wootton game,” Kurapov said. “Honestly I’m not quite sure what to expect because Wootton has a completely different team and so do we. I do know that we’re going to have a big turn out in fans and it’s going to be loud. I’m definitely excited for that; it’s always fun to play in front of a crowd.”