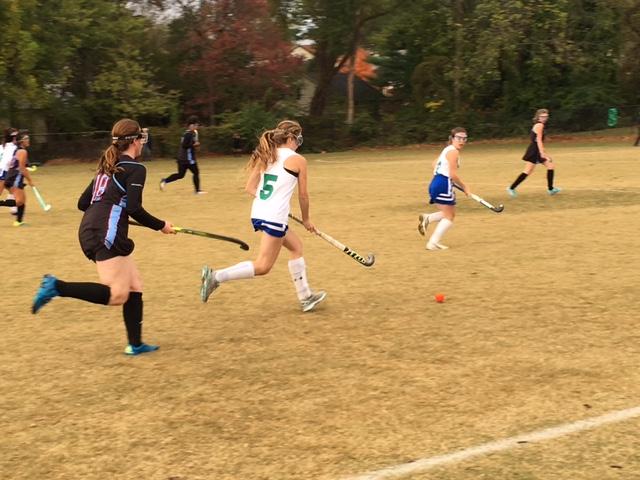 Sophomore Regan Solomon (#5) chases after the ball while being trailed by a defender. The Bulldogs were 16-0 in the regular season.

The team’s record improved from 9-5 in 2014 and 8-4-1 in 2015 to perfect in the 2016 regular season. While there are multiple factors contributing to the team’s success, the Bulldogs attribute their improved chemistry as one of the top reasons.

“The first few games we realized how well we worked together and how far we could go,” sophomore Taylor Slaughter said.

While the team did expect more success than the previous seasons, they definitely were not expecting such great accomplishment.

“The team was very surprised that we made it this far,” junior Martina Rabade said. “We didn’t think we had the potential at first, but after a few games we knew that this was going to be our season.”
The team has agreed that their preparation and focus to improve this year has also contributed to their success.

“We all got along on the team which made us gain trust in each other and everyday we would give an 110 percent effort at practice,” Rabade said.

One thing that helped the team go undefeated was their spectacular goal differential of only allowing two goals while scoring a whopping total of 39 in the regular season.

“I think the girls on the team decided they wanted to prioritize field hockey,” coach Cay Miller said. “It was not just one or two players who made the commitment; it was the whole team.”

The team also has great sportsmanship. They never allow themselves to go ahead of an opponent by more than six goals, which is an unusual policy that many do not see very often. While most teams may score a few more goals and then stop scoring, this team stops at six so they don’t add salt to the wound.

“Teams with integrity do not trash talk,” Miller said. ”They make their statement during the game on the scoreboard, and then they can shake hands with sincerity after the game.”

The team achieved their goal of beating Wootton, which happened on two occasions , and going to regionals. Going to states was just an extra bonus for this team, and becoming the first field hockey team to do that in over thirty years leaves the bulldogs with some closure after losing to South River HS in the state title game.

“[Our] goals were to beat Wooton and to make it to regionals, which we did and now we have the potential to go farther,” Rabade said.

The bulldogs have gotten a big boost this year from leading scorer Alexandra Sperling, who made the team as a freshman, but has taken the next step as a sophomore. She had 13 goals on the season.

“I was able to be the leading scorer by working hard and always making sure I was in the right position,” Sperling said.

This team has consistently mentioned that trust in one another has allowed them to take that next step to be a state title contender.

“This year’s team was a perfect storm of diligence, integrity, talent and teamwork,” Miller said. “They realized that when they work hard in practice, it shows in their games.”

With a strong sophomore class, that can help carry the team as well as the confidence they have in each other, there is no limit to how far they can go.

“We knew we could do it and we would always come out pumped and excited for each game,” Rabade said.