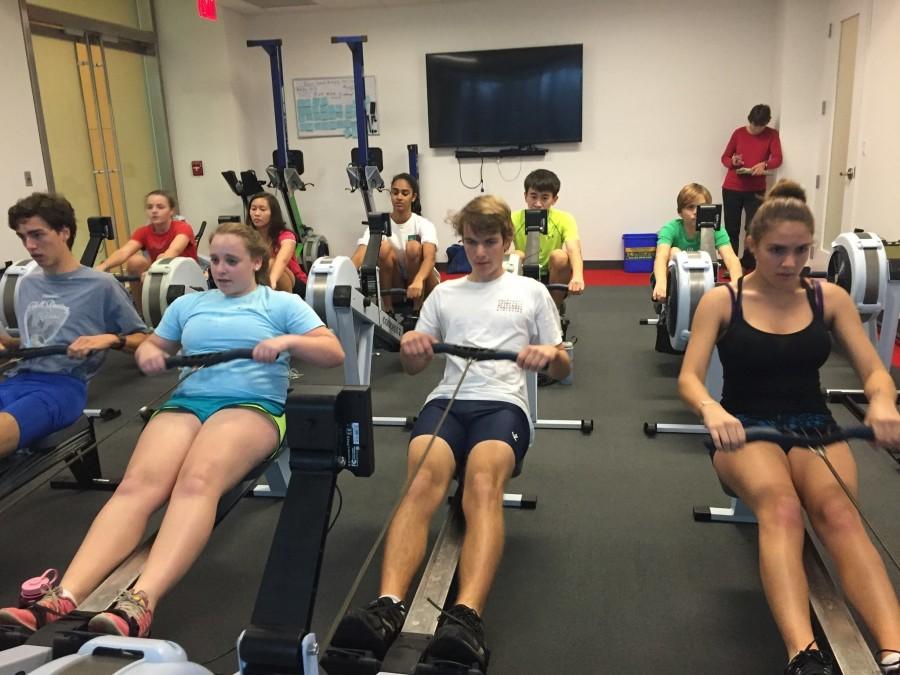 Members of the crew team workout in Erg machines to prepare for their spring season, which consists of shorter, 1.4 mile races.

Fingers clasped around a black handlebar and feet strapped into pedals, they strain against the resistance of a rowing machine, pumping their bodies backward and forward to simulate the motions required to propel a narrow boat through the water. Another group can be seen drenched in sweat as they move through endless circuits of ab exercises, squats and lunges.

Since mid-November, the members of the CHS crew team have called Launch Sport Performance in Rockville their home for winter training.

With a new coaching staff this year, crew has moved winter conditioning from the Potomac Community Center, where it was held last year, to the Launch workout facility, and the team has increased the intensity of its practice schedule with the various trainers at Launch from last year’s two practices a week.

“We practice Monday through Friday, so it’s pretty grueling work,” senior captain Skylar Schaumburg said. “Usually if you see [people] struggling to walk up the stairs at school, they most likely go to crew winter conditioning.”

Launch provides the team of about 45 rowers with the unique opportunity to cross-train rather than only focus on the muscles required to maneuver a boat. The Erg machines, in which the athlete slides on a beam while pulling a handle that is attached to a resistance pulley of sorts, are able to strengthen individual muscles, but the trainers at Launch focus on other areas of the body as well.

According to the Launch website homepage, the doctor-owned and operated facility addresses the entire body, as opposed to just key areas and focuses on the linkage between brain and body.

Though the system is new, the team has already seen improvements, according to Schaumburg.

“We test around every two to three weeks and each week almost every rower’s times go down because of the conditioning,” Schaumburg said. “Once we get to spring season, the coaches can tell who came and actually tried at winter conditioning because the improvement is massive. Rowers that worked hard get better times and get placed in better boats.”

Though the training is ultimately for the upcoming spring season and, for returning rowers, the following fall season, there is also an opportunity for rowers to showcase their hard work over the winter season at the culminating Mid-Atlantic Erg Sprints competition in January.

Rowers from each high school team in the mid-Atlantic area are invited to compete on a collection of Erg machines at T.C. Williams High School in Alexandria, VA. The rowers are divided into groups by gender, age and size and then compete to see who can get the fastest time in either the 2,000 meter race or the 1,500 meter race.

According to Schaumburg, the relatively new team has trouble competing with such a large region, but has been improving each year.

According to senior captain Emily Snider, the team has won a few medals at the competition in the past in the women’s 1,500 meter race and in a few of the novice events which are only for first-year rowers, regardless of age.

The main focus of the training, however, is still on the spring season which includes shorter distance races.

According to Snider, the team wants to win more medals in the spring season, but also increase awareness about the team as a whole, hopefully recruiting more members regardless of their level of experience.

“Crew is kind of like cross country and track in that in the fall all of our races are five kilometers long and in the spring all of our races are two kilometers (about 1.4 miles) long,” Schaumburg said. “These two types of races are extremely different because one is a long, mentally and physically straining race while the other is a full on sprint. Most rowers love the spring season a lot more than the fall because sprinting is much more fun than keeping a steady pace for 20 minutes.”

In order to perform well in the spring season, however, rowers need to train throughout the winter when the weather makes it too cold to go out on the Anacostia River where the team practices in warmer weather.

According to senior captain Jordan Epstein, the ice on the river makes it impossible for the team to row.

There are also advantages to being able to do harder workouts off the water than would be possible to do on the water.

“Winter conditioning builds your endurance and muscles and a big part of conditioning is learning your limits when working out and learning that you can push so much more than you think you’re capable of,” Snider said. “When we get back on the water everyone has a better mindset on rowing and is able to push harder than they could in the fall season.”

The Launch workout center, which is on Tower Oaks Blvd., is much more convenient than the hour-long trip to Anacostia for three-hour practices on the river, six days a week during the spring and fall. The team can carpool to the practices which run from 3 p.m. to 5:30 or 6 p.m. The center also provides the team members with an individualized way to train and strengthen new muscles.

However, according to Snider, during winter training, rowers can lose good rowing technique, which sometimes has to be re-learned during the first week back on the water.

Winter training also poses the unfortunate opportunity for rowers to get injured as they can overstress their bodies during the grueling workouts.

“If a rower gets injured during conditioning then [he or she] could risk being out for part or all of this spring season, which is our favorite season,” Schaumburg said. “This is [less common] now that we’re training at Launch because we’re doing cross-training, so it’s not as straining on one specific muscle, it works out all of them.”