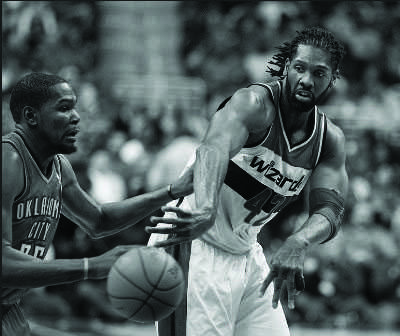 Generally speaking, teams with better regular seasons are more successful in the playoffs.  The Wizards, however, a team that had an above-average season at best, and the Capitals, a team that didn’t even win their own division, made amazing runs in the postseason.

Resiliency, momentum, offensive firepower and defensive stability are key components that have allowed these two teams to thrive.

The Wizards and the Capitals have been D.C.’s finest in terms of displaying their abilities in the postseason. The Wizards may have been ranked 19th in offensive efficiency during the regular season, but they averaged over 100 points per game in their first round sweep over the higher-seeded Toronto Raptors.

The Capitals scored two or more goals in each of their first round wins against the New York Islanders.  The NHL’s leading scorer Alexander Ovechkin led Washington with eight points in the playoffs after 13 games and was determined to carry his team past the second round for the first time in his career.

Even though both teams clicked offensively, their defensive aptitude was the key to their success. According to ESPN, the Wizards ranked fifth in defensive efficiency during the regular season, and the Capitals only allowed three or more goals twice in the first 11 playoff games this year.

Resiliency: few teams have it but it is a key necessity for a deep playoff run.

The Wizards suffered from injuries throughout the first and second rounds of the playoffs but still put up a big fight in the Eastern Conference Finals. John Wall and Bradley Beal, the two main playmakers for the Wizards, were both injured while playing the Atlanta Hawks in the second round, yet Paul Pierce and the Wizards were able to fend off the one-seeded Hawks in an exhilarating six game series.

The Capitals, on the other hand, managed to get through the treacherous regular season for the most part unscathed, the only injuries being to Eric Fehr and Tom Wilson, who both returned to the lineups for the postseason.

Even with the Wizards’ mediocre finish to the regular season, going 24-27 after the All-Star break, and the second place divisional finish for the Capitals, both teams used momentum from the earlier rounds of the playoffs to propel them forward.

Starting out a series with a win, especially on the road, which the Wizards did in the first round against the Toronto Raptors, and the second round against the Atlanta Hawks, gave the team an extra boost of confidence.

The Capitals used their defensive toughness, size, timely scoring from star players and shot blocking abilities to get past the Islanders and battle against the Rangers in a seven game series nail-biter.

The 2014-15 postseason in Washington D.C. has been just the third time since 1988 that both the Capitals and Wizards have made the playoffs in the same year.  While the Wizards and Capitals both experienced early round losses in the playoffs and disappointment in previous years, this year seems different. The incredible talent of both these teams from the nation’s capital gave D.C. fans hope when watching their teams’ pursuit of the championship.