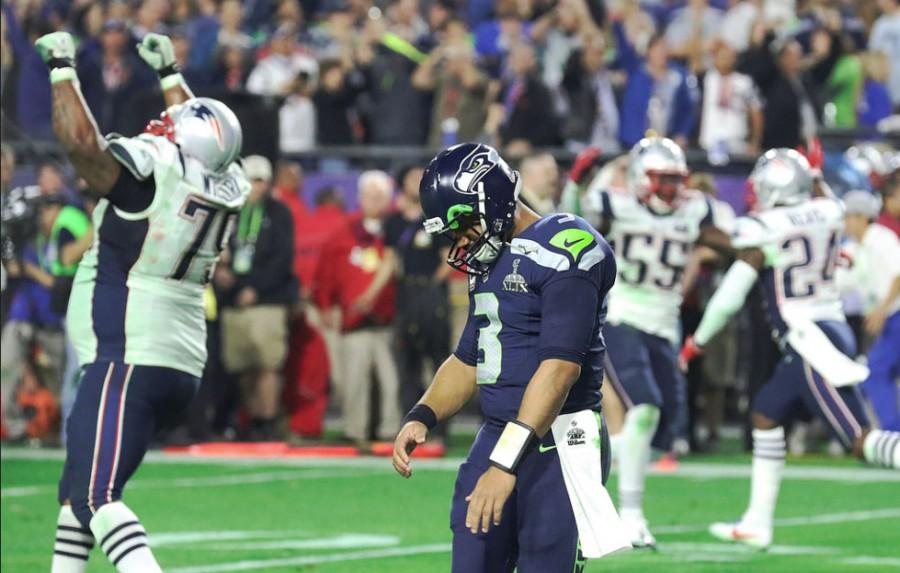 Seattle Seahawks quarterback Russell Wilson drops his head after throwing an interception on the Patriots one yard line.

Seahawks have the ball with 27 seconds left in Super Bowl 49 on the Patriots’ one-yard line down by four. quarterback Russell Wilson hands the ball of to superstar runningback Marshawn Lynch, and he easily pushes forward for one yard and wins the Super Bowl for Seattle… but thanks to head coach Pete Carroll, none of this ever happened.

Instead of going with the Seahawks’ star runningback Marshawn Lynch, who rushed for 102 yards and a touchdown in the game, the Seahawks decided to pass on a designed second down play.

Carroll decided to trust his quarterback, Russell Wilson, with the ball in an effort to seal the comeback win for the Seahawks, but Wilson’s timely interception on the goal line to undrafted rookie Malcolm Butler sealed the historic win for the Patriots, and an even worse loss for the Seahawks.

In a postgame interview with NFL.com, Carroll took full responsibility for the play call, and said he thought his team had better matchups with the Patriots’ defense if they decided to run a pass play.

According to Carroll, they had a plan: they were going to try to pass it on second down, and if they kept getting stopped, they were going to punch the ball up the middle with runningback Marshawn Lynch on third and fourth down… granted if everything went as planned.

However, Butler made a great play for the ball and intercepted Wilson’s pass attempted for Ricardo Lockette with twenty seconds left.

Prior to the interception that decided the game, the Patriots just came off a touchdown drive that capped their ten point comeback with a pass to wide-receiver Julian Edelman from three-time Super Bowl MVP quarterback Tom Brady to put the Patriots up 28-24.

With two minutes and two seconds left in the biggest game of the year, all eyes were on the Seattle offense with 80 yards to go for a game-winning touchdown. With multiple running plays to Marshawn Lynch and plays by Russell Wilson, the Seahawks had the ball on the Patriots’ 38-yard line.

Wilson drops back to pass, and lobs a heaping throw to wide-receiver Jermaine Kearse around the Patriots’ five-yard line. Kearse makes a play for the ball, and is broken up by the Patriots’ defense. But, Kearse bobbles the ball while on his back and makes one of the greatest catches in Super Bowl history.

It was destiny. With the ball on the Patriots’ five-yard line, all the Seahawks had to do was give it to their star runningback Lynch and let him take care of business. They give it to him on first and goal, and he rushes up the middle for four yards to the one-yard line.

It was the perfect scenario for Seattle. With the faces of the Patriots’ players and coaches devastated, all they had to do was run the ball.

But, one play call, a play call that will be talked about for years to come, and a lack of execution by the Seattle offense, completely turned the tables, for after the interception, it was the Patriots jumping for joy, and the Seahawks bent over in disbelief and in utter devastation.