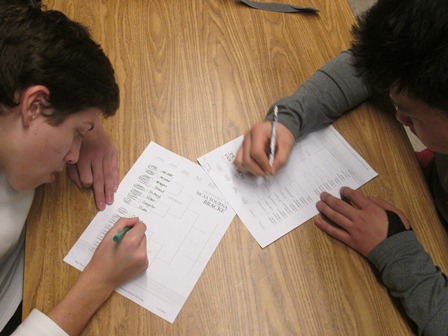 By Ana Faguy and Michael Fox

The madness has begun. Yet again, it is time for all college basketball fans to come together and make their ever-so-famous brackets. People will begin to hustle together and decide the future of the NCAA basketball tournament.

Every year, people all across the country commence in celebration of the next generation of basketball players and have a little fun. The NCAA men’s basketball tournament takes the top teams in the country and places them against each other until there are two teams left who play for the championship.

Talk of March Madness is going to spread quickly throughout the halls of CHS once the first game begins.

“During March Madness kids are always talking about the games and comparing their brackets at lunch,” sophomore Austin Yang said. “You will always see kids going crazy at school over upsets and bragging about their team winning in the previous round.”

Participants in March Madness bring students and staff together at CHS to compete for whose bracket will win. March Madness becomes a way of life— people are constantly checking their phones to see the scores, and at lunch, the media center is full of students watching the games.

“There is a lot of drama involved in March madness, and the drama extends so the audience is captivated for weeks as opposed to one super bowl game,” boys basketball coach Robert Bean said. “As far as the entertainment value, every round gives you a whole new docket of entertainment. That’s one major difference; there are twelve days of major high level playoffs. It gives you a lot of action to look forward to for an extended period of time.”

“I think it’s one of those sports events that brings the school together like the Olympics,” Collins said. “It brings us together and gives us something new to talk about as a school.”

With technology expanding as much as it is, March Madness drama is all around us, whether it is during or after the school day.

According to a USA Today article, the tournament’s live-streaming games are accessible even to office workers who have sports and entertainment sites blocked by employers, as well as teachers, bus drivers, retail workers and others who normally aren’t in front of a TV or computer during the workday.

Students can access the games during the day through mobile apps such as ESPN bracket bound, or ESPN March Madness live.