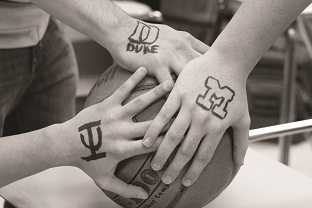 By Ana Faguy and Caitlin Doherty

The NCAA men’s basketball tournament—the three weeks of insanity known as March Madness—is just around the corner, and the word from basketball fans at CHS is to expect the unexpected this year.

“Anyone can beat anyone,” boys basketball coach Matthew Miller said. “Anything can and will happen.”

A survey of the varsity boys basketball team found Indiana, Michigan, Florida, Duke and Butler were the teams most frequently predicted to cut down the nets at the championship game at the Georgia Dome in Atlanta April 8.

“My heart tells me UNC, but my mind tells me Florida,” said Miller, a North Carolina Tar Heels fan.

Many of those predicted to win have been ranked in the Top Five nationally for most of the season, but that is no guarantee they will come out on top.

According to security team leader Terry Bell, the best part of March Madness is “when the underdog upsets a favorite.” There is plenty of evidence to back up his sentiment.

According to the Infinity sports website, some of the Best March Madness upsets were when George Mason advanced to the Final Four in 2006, Jim Valvano’s NC State team nipped No. 1 ranked Houston at the buzzer in 1982, and a hot-shooting Villanova team upset Patrick Ewing and Georgetown in the 1985 championship game.

The fun this year starts on March 17 with Selection Sunday, the day when teams find out if they are in the tournament, and when, where and which team they will play.  Brackets become a part of the daily talk among students, and it’s common to find them comparing their predictions of who will make it to the Final Four.

“I like it because everyone, male, female, young, old, student or teacher gets involved,” Miller said. “Everybody has a reason to get excited about it.”

The first two days of the tournament are basically back-to-back basketball, with games on television from noon until after midnight. With continuous games, fans are eagerly looking out for this year’s memorable game.

One game that stands out in the minds of both Miller and Bell is the 1982 Georgetown-UNC game where UNC sophomore Michael Jordan hit a jump shot that proved to be the game winner.

One of Georgetown’s standouts that year was CHS ’78 alum Eric Smith.

“When you play you don’t get the same feeling you get when you are watching it,” Smith said. “Watching it is more exciting than playing, but trust me, it’s exciting playing too.”